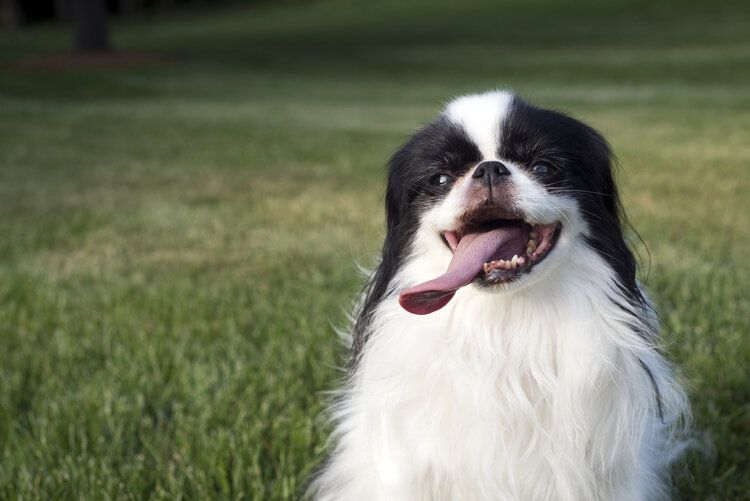 The Japanese Chin is also known in some circles as the Japanese Spaniel. It has long been held in high regard by the nobility in Japan, so it has a sense of prestige and elegance surrounding it.

This is known as a toy breed, as well as a lap dog and a wonderful companion. It may be relatively miniature in size, but this is a breed that can hold itself well while still effectively acting as its own Princess.

These are dogs that have a certain air about them, and even though they are less common in the Western world, there is still a degree of popularity surrounding them.

However, as with any other dog, it will still be advisable to learn more about them before you go ahead and make any kind of purchase.

Japanese Chin Puppies – Before You Get One

So, before you go ahead and purchase that extremely cute ball of fur, there are some things that you might want to think about regarding Japanese Chin puppies.

First of all, they are small in stature but they are certainly not that small when it comes to their personality. Instead, they have a real presence about them.

However, you do need to be aware of any potential health issues, how easy they are to train, the level of exercise that they require, and also the kind of food that they ear.

By doing this, you will help to increase their lifespan, and who doesn’t want that to happen with their precious puppy?

1. The name is actually not accurate.

Even though it is called the Japanese Chin, the name is certainly not accurate.

Instead, the earliest mention of this breed of dog is actually in China, although the Royal courts in both countries did have a fondness for this breed.

2. The Pekingese came from them.

The Pekingese is another famous breed of dog from this part of the world, and it is strongly believed that they were an offshoot of the earliest Japanese Chin dogs.

They certainly came from the same area and have a number of similarities with one another, so this is something that is entirely possible.

The Japanese Chin does have many characteristics and abilities that closely resemble cats.

They are wonderful at climbing, are agile, and they do prefer to be on top of things just like a cat in your home.

Of course, there are so many other things that could have been mentioned here, but at the end of the day, there is no doubt that the Japanese Chin is going to be a breed of dog that brings so much joy to you.

Physical Traits of the Japanese Chin

The Japanese Chin is not the biggest of dogs by any means, but that does not mean that it is weak.

There is no doubt that there is an Oriental look about the dog, and they are very delicate, and yet there is still a real strength about them.

Their fur can be relatively long for their size, and they do require regular grooming to keep things in good condition.

Their heads are also seen as being larger in proportion to their bodies, and this is something that is rather apparent.

You will also notice that their eyes are dark and spaced wide apart, which is a real feature. Their body is often rather square, and their chests are wider than you would have normally anticipated.

Also, their hindquarters are going to typically be quite strong, but then this is counteracted with their feet being rather slight and slender.

The Japanese Chin can come in a variety of fur colors as well, but overall they follow the same kind of build all of the time.

How Big is a Full-Grown Japanese Chin?

When it comes to the size of a full-grown Japanese Chin, then there is only a slight difference between the sexes. Also, they are certainly on the small side hence them being in the toy section.

Most Japanese Chin dogs are between 4 to 9 pounds in weight with the males tending to be more towards the upper end on most occasions.

When it comes to their height, then it will often be in the region of 8 to 11 inches to their withers. Once again, the male will tend to be the tallest of the sexes.

What is the Life Expectancy of the Japanese Chin?

The life expectancy of the Japanese Chin is in the same kind of range as the majority of other toy breeds.

This means they live for generally anywhere between 12 and 14 years, but you can do things to help prolong their life.

Things to Know When Owning a Japanese Chin:

So, what can you expect from this dog regarding their level of intelligence, temperament, and personality?

Well, this is not a stupid dog by any means. Also, you will have a dog that is extremely loyal.

It has a real aristocratic air surrounding it thanks to its posture and its general appearance. That has been part of the appeal of this breed since the very beginning, and as soon as you set eyes on one, then you understand why.

This is not only an intelligent dog, but it even has an intelligent-looking expression on its face. This adds to the air surrounding it without a shadow of a doubt, and yet it is also highly inquisitive as well.

They are extremely happy, and they tend to get on well with practically anybody at all.

They will rather quickly build a very strong tie to their owners, and they enjoy nothing more than to be in the middle of everything that is going on.

At first, they can be slightly shy with a stranger, and this can take them some time to overcome this, but when they do, you then have a friend for life.

You will discover that they are in tune with your own emotions and are highly sensitive. That does mean they can be affected by your moods, so do be aware of this.

Overall, the Japanese Chin is capable of putting a smile on your face, and they will be loving and loyal throughout their entire life.

The Japanese Chin is a dog that is truly in miniature, and the same goes for their diet.

However, do still steer clear of mass-produced dog food as the quality is just not there, and it can be bad for their health.

Instead, there are some things that this breed does prefer from a dietary perspective, and we recommend that you follow as closely to this as possible.

If you get a puppy from a breeder, then do check to see the schedule that they are on and stick to it at first. You can slowly change things over, but take your time to avoid complications with their digestive system.

You should avoid a grain-based formula when feeding them as well, and if you are feeding them kibble, then make sure that it contains a healthy amount of protein.

Look for food, which includes vegetables and fruit, that can provide them with a range of nutrients. Pay close attention to sources of Omega-3 as that is going to prove to be beneficial to their health.

They do also love real meat rather than the processed stuff in cans, but we are talking about small quantities as this is a small dog and obesity could become an issue.

The key here is lean meat and to feed them a couple of times a day and in small amounts.

The Japanese Chin is not going to be the kind of dog that is running wild on a constant basis, as it is far too elegant for that.

However, that is not to say that it does not require more than its fair share of exercise. On average, it should be in the region of 30 minutes per day.

Do use a harness instead of a collar as their necks can be rather fragile.

They can be the perfect dog for apartment living due to their small size and the lower exercise requirements.

However, it will still be better if there is a yard for them to explore, but they will uncover any weak areas and escape, so do be warned.

Unfortunately, the Japanese Chin can be affected by a number of different health conditions that are regarded as being quite common with this breed.

You need to be aware of them before pressing ahead and getting one to make sure that you are prepared.

When you are going to purchase a puppy or even an adult dog, you should still insist on certain health checks.

The most common health conditions attributed to this breed to be aware of are as follows:

Several of them can be checked in advance with their parents to determine the chances of your dog being affected. A good breeder should be in a position to provide you with this information.

The Japanese Chin is going to be a wonderful addition to your family and home since they are full of character and have an amazing personality. They are cheeky, very intelligent, and always up for trying to learn new tricks.

Do just remember to groom them on a regular basis, and have their parents checked out for various potential hereditary diseases before you purchase a puppy.

If you look after their health, then you are going to have many happy years together.