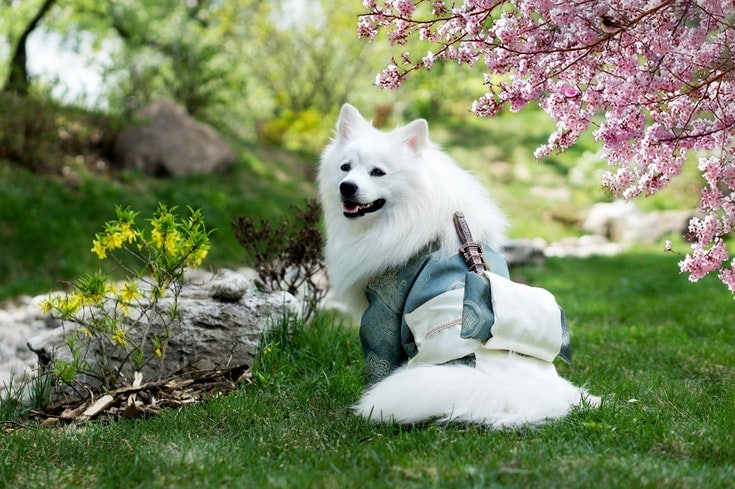 The island of Japan is home to several impressive dog breeds. Many of these breeds are incredibly rare outside of Japan, though others have become wildly popular abroad. Some breeds even have incredible stories that have practically become legends, detailing the bravery or loyalty that they’re known for.

In Japan, a major change started taking place in 2003 when dogs started to become a preferable alternative to children for many Japanese people. Since then, the number of dogs and cats on the island has grown to outnumber children and the popularity of pets is still growing.

So, while Japanese dog breeds have been growing in popularity around the world, they’ve been exploding in their home country. Let’s take a look at 13 of these breeds and see what’s got the Japanese people so excited about their dogs. Here are 13 Japanese dogs to know:

We’ve listed the Shiba Inu first for good reason; they’re the most popular Japanese dog breed in the world. This breed is also the face of a wildly popular set of memes still in use (“Doge”). They’re a very independent breed and aren’t affectionate in the way that many Western dogs are. But they’re excellent companions and can even do well in small spaces like apartments, which is part of the reason for their massive rise in popularity.

Territorial and often aggressive, Akitas don’t do well with other dogs. That said, they’re one of the most loyal dog breeds on the planet. There’s a well-known story of an Akita named Hachiko who would walk to the train station with his owner every morning to see him off to work. When his owner died, Hachiko went to that station every day to wait for him for over 10 years until he died, still waiting at the train station for his master.

These big dogs are also known as the Japanese Mastiff and based on their large size, it’s easy to see why. These eager-to-please pups can reach impressive sizes of up to 200 pounds. But they have a sad history, originally bred to become the ultimate fighting dog when dogfighting was a much-celebrated sport in Japan. They’re very cautious of other dogs and may react with aggression towards strangers. Unfortunately, this rare breed is banned in some countries.

The second-largest island of Japan, Hokkaido is the home to the Hokkaido Inu, a breed with extremely similar to the Shiba Inu or Akita. They have thick, double-coated fur that’s meant to keep them warm while on the long hunts they were originally bred for by the Ainu tribe as far back as 1140 AD. Interestingly, they’re the only Japanese breed to have such a double fur coat.

Also referred to as the Japanese Spaniel, the Japanese Chin is a small companion dog that was long popular with the ruling class and aristocrats of Japan. They have naturally crossed eyes and an undercoat that can take up to two years to grow out all the way. They’re also known for performing many tricks, which is where they got the name of Japanese Chin since “chin” means “to perform a lot of tricks” in Japanese.

With a natural pattern of black and orange stripes, it’s easy to see why the Kai Ken received the nickname of “tiger dog.” They were originally bred as hunters in the mountainous regions of Japan, which helped them to be strong and fast; traits necessary when hunting boar, deer, and fowl. Even today, this strong hunting drive persists in an independent streak that can make them a bit difficult to train, even though they’re quick learners.

Considered a national treasure of Japan, this breed is exceedingly rare and difficult to find, even on their home island. The cousin of the Shiba Inu, Shikokus tend to be much easier to handle and train. They’re also known for being friendlier towards other dogs since they have less of a natural prey drive, even though they were used originally for hunting game like wild boar.

It’s hard to tell whether it’s true, but according to Japanese legend, the Kishu Ken is a direct modern descendent of wolves. From their temperament, it might be true. They tend to be more impulsive than other breeds with a strong drive to hunt, which makes them dangerous around other pets. They’re known for being brave and independent; great traits for hunters but their independence can make them hard to train.

Calm yet courageous, the Ryukyu Inu has a similar appearance to the Kai Ken with black and brownish-orange stripped fur. It’s believed that they were bred on the southern parts of the island to hunt wild boars. What’s most interesting about this breed is that they can actually climb trees to get a better vantage point for tracking prey thanks to a unique dewclaw they’ve developed.

Also called the Nippon or Oyuki Terrier, the Japanese Terrier is a miniature dog breed that make excellent companions. They’re cuddly, loving little pets that form strong bonds with a single individual. They can still do well with other family members and even other pets, but their possessiveness can lead to aggression if they see others getting too much attention from their person.

These compact companion dogs were bred in Japan in the 1920s. Japanese Spitzes easy-going, loving, and make excellent partners, which is part of why they’ve been growing in popularity. Plus, they’re incredibly adorable, with a puffy white coat that’s much easier to care for than you might imagine from looking at it!

A post shared by Ryu, the T.Bs. and Lil M too (@ryu_theshibainu)

This breed was developed in the early 1900s by mixing a Chow Chow, an ancient Japanese dog called the Aichi, and several other Japanese Inu breeds. They look very similar to Shiba Inus or Akitas, but they have a straighter tail than other types of Inus. They’re known for being excellent guard dogs, though they also make loving companions. But good luck finding one outside of Japan; they’re exceptionally rare.

You don’t have much chance of finding one of these rare Japanese dog breeds. The only breeder of this breed died in 2012 at a time when only two purebred Sakhalin Huskies were left in Japan. Luckily, there are an unknown number still living on Sakhalin Island, but there might be none left in captivity. This breed’s biggest claim to fame is that two of them survived a full year in Antarctica after a failed expedition left them stranded.

Keep in mind, some of these breeds will be very difficult to locate outside of Japan, and some would even be difficult to find on the island! So, if you want to add one of these Japanese breeds to your family, you might want to start looking now because it could take a while to locate one!

Check out some of our other international dog breed posts:

Why Do Dogs Tilt Their Head? (Dog Behavior Explained)

9 Easy Ways to Get Dog Hair Out of Clothes