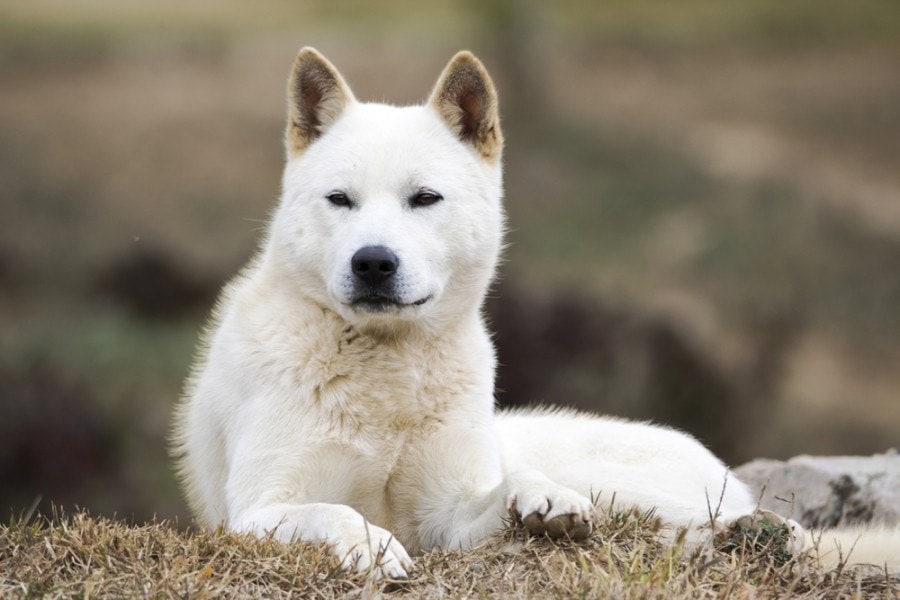 Just as comfortable chasing down prey on the hunt as curling up quietly indoors with their loving owners, Jindos are adaptable dogs with a calm demeanor and impressive physical abilities. They have regal looks and a bold temperament, and they’re known for being incredibly faithful to their owners.

The Jindo breed comes from the island of Jindo off the coast of South Korea. They’re thought to be the offspring of indigenous Korean dogs and dogs that accompanied the Mongols when they invaded Korea in the 13th century. It wasn’t until 1938 that the breed was named a national treasure by the Korean government. Then, 50 years later, Jindo dogs even marched in the Olympics held in Seoul, South Korea.

Jindos are known to be excellent hunters. They’re highly athletic; capable of agile movements and high speeds that help them succeed when chasing down prey. Likewise, they also excel as guard dogs since they’re naturally wary of strangers. They’re rather territorial as well; a trait that’s great for a guard dog but not so great for families with multiple pets.

Jindo Puppies – Before You Get One

Jindos make excellent hunters. Not only are they fast enough to chase down elusive prey, but they also love to do it. They have a naturally strong prey drive that perfectly suits them as hunters.

However, this same trait can be a real nuisance if you have other pets in the same household! Because of this, Jindos tend to do best when they’re the only pet in the family. They especially don’t get along with other male animals, and small animals can easily ignite their prey drive, causing them to give chase!

2. Their Loyalty Knows No Bounds

Many dogs are considered to be loyal to their owners, but Jindos take it to new levels. There’s an incredible story about a Jindo named Baekgu. This dog was sold and moved. Seven months and 190 miles later, it found its old master. Baekgu was on the verge of death; starving, haggard, and clearly worse for the wear, but he had managed an incredible feat that few other creatures could.

This story and others like it helped the Jindo to reach a revered status in their homeland. They’ve even got a great statue there in honor of the breed.

Part of the reason why Jindos make great hunters is their awesome athleticism. They’re extremely fast and powerful, thanks, in part, to their muscular hind legs.

But these legs also serve another purpose: helping Jindos escape backyards! If you’re going to have a Jindo as a pet, you need a pretty high fence to keep it in. Err on the side of caution and go for eight feet. Any less, and you’re likely to open the back door to find that your Jindo has disappeared!

Temperament & Intelligence of the Jindo 🧠

Jindos are highly intelligent creatures. They’re extremely adaptable and are just as comfortable living the spoiled life of a family pet or the much tougher life of a hunting dog. Their loyalty is the stuff of legends and the strong bonds they form with their people make them great companions.

Though they’re incredibly athletic, they’re not terribly energetic. In fact, when you’re indoors, your Jindo will be mostly calm and easy-going, as long as you’re around. But leave your Jindo alone for too long and you’re sure to see boredom and destructive behaviors soon following.

You won’t need to provide too much exercise for your Jindo, 30 minutes each day should suffice. They even do well in apartments, so long as you provide several brisk walks. You’ll also need to provide plenty of mental engagement. These are very smart dogs that will get bored easily if you don’t keep them engaged.

Jindos can be good family pets, as long as the family doesn’t have young kids. This breed doesn’t tolerate the sort of rough antics that some young children often engage in.

But Jindos do need lots of attention and having multiple people in the household can ensure that your Jindo always gets plenty of human interaction. Still, they’re a one-person dog and will bond strongest with only one member of the household, even though they’ll get along well with everyone. Just make sure no one gets jealous!

Because of their strong prey drive, Jindos don’t do well with other pets. It’s worst with other male pets, which can drive a Jindo to aggressive and territorial behavior.

It’s important that you socialize Jindos early and often. This can help to make them accepting of other animals so you can take your Jindo to dog parks and other places where you might run into other pets without worrying about whether your Jindo is going to attack someone else’s dog!

Things to Know When Owning a Jindo:

Jindos are a medium-sized dog with moderately-low physical activity levels. But unlike many western breeds, their digestive tracts are built to digest meat, not processed carbohydrates. This means that you’ll want to stay away from store-bought dry dog foods, even the high-quality ones. Especially stay away from anything with corn in it as this is particularly unhealthy for Jindos.Instead, you’ll want to cook meals for your Jindo at home. If you can’t do that, you’ll need to get all-natural commercially produced foods of premium quality for your Jindo. If you need more help determining what to feed your Jindo, contact your veterinarian.

Despite their exceptional physical abilities, Jindos don’t need too much exercise, a half-hour of brisk walks each day should suffice. They don’t even need a yard to run around in, so they make great dogs for apartment dwellers. Just don’t leave them alone for too long or you’ll start to see some destructive behaviors destroying your apartment!

Brimming with intelligence and loyal to a fault, the Jindo is an easy breed to train. They want to please their owner and they’re smart enough to understand what is being asked of them. Just be sure to provide plenty of positive reinforcement and you’ll have your Jindo following obedience commands like a seasoned pro in no time.

When you see a Jindo’s short but luxurious coat, you might expect them to be high-maintenance. While they do shed a considerable amount year-round and even more in the summer, their self-cleaning coat takes care of most of the maintenance for you.

You will need to provide daily brushings though, just to help remove all the dead and loose hairs. But you’ll find your Jindo bathing itself often, similar to the way that cats do. This breed rarely needs bathing and won’t produce any unsettling odors.

Most purebred dogs have several health conditions that you should watch for as they age. Some breeds have a long list of common health ailments they’re susceptible to.

But the Jindo seems to break all the rules here. There’s almost nothing that commonly affects this breed! Even the one condition that they’re sometimes susceptible to is a rarity.

Both sexes of Jindo display similar behaviors. They’re even similarly sized with males only out-sizing females by an inch on average. Even temperamentally they’re not very different. Both sexes can display equal amounts of territorial behaviors and aggression, though males that haven’t been neutered might have a bit more proclivity for them.

Whether you’re a hunter, an apartment dwelling individual, or a family with a large home, you’ll find the Jindo to be an excellent companion, friend, and beloved family member. These dogs are highly intelligent and as faithful as a pet could be. They’re also highly adaptable, equally well-suited for a variety of lifestyles.

Your Jindo will need lots of attention from you, but it won’t need much exercise, which is why they do well in apartments. But take care to socialize your Jindo early and often or you might end up with an aggressive dog that has an incredibly high prey drive. Not a great combination when other people’s pets come near!