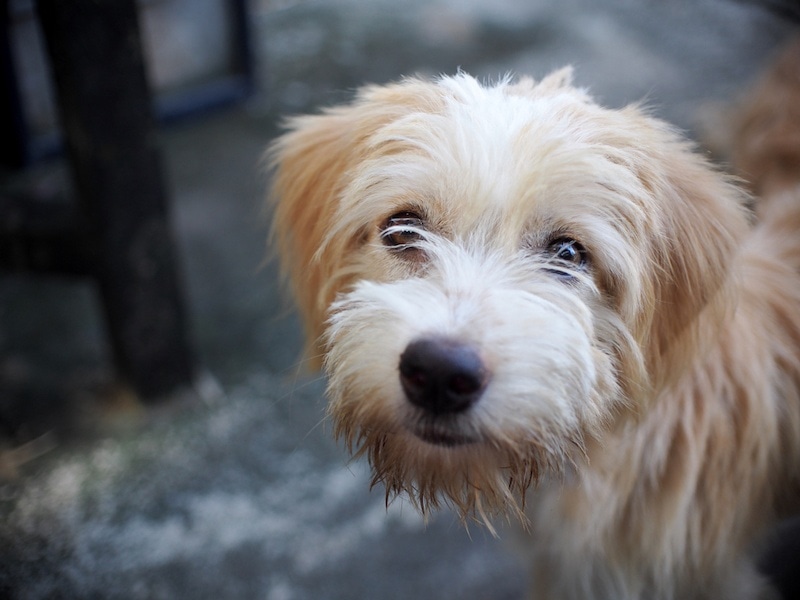 Do you love dogs, but don’t have a big enough home and yard to accommodate most high energy breeds? Then take a closer look at the King Schnauzer, a small dog with tons of charm. These bearded little canines love being around people and make loyal, attentive companions.

While the King Schnauzer hybrid breed is relatively new to the scene, we know a lot about the history of both its parent breeds: the Cavalier King Charles Spaniel and the Miniature Schnauzer.

The Miniature Schnauzer was developed from their larger cousins in the late 19th century, believed by some to have come about by mixing the Standard Schnauzer with Poodles and Affenpinschers. They were used as small farm dogs and ratters but nowadays are generally companion dogs.

Though small toy spaniels have been bred in Europe as hunters and companions since the 16th century, the King Charles Spaniel breed was developed in the 17th century when they became favorites of King Charles II.

The breed nearly died out but was revived by an American in the 1920s and became known as the Cavalier King Charles Spaniel. Today they are kept as companions and lapdogs.

King Schnauzer Puppies – Before You Buy…

These pups usually favor the look of the Miniature Schnauzer with wiry, dense fur that gathers on the face as bushy eyebrows, chin whiskers, and a stubby mustache. The old man’s beard on a tiny dog’s body makes for a thoroughly charming face, and their spirited personalities win many hearts.

Though smaller dogs generally live longer, the King Schnauzer rarely lives past 15. They regularly live over a decade, however, so make sure that you are prepared to provide long-term care for your canine companion.

If you will be getting your puppy from a breeder, don’t be embarrassed to ask them a slew of questions about how they raise and care for their dogs.  What food do they prefer? Do they recommend any training materials, or classes? What, if any, socialization have the puppies received?

You certainly won’t be able to predict every issue that may arise. But the more you know about your dog and how to best meet their needs before you bring them home, the better!

Because this hybrid breed is still so new, the price range for puppies is quite varied. You can find them for as low as $500, or if you go to a show dog breeder that prioritizes pedigree and purity of blood you may be asked to pay as much as $4,000.

Nearly every show bloodline Miniature Schnauzer in America is a descendant of one dog. The famous father was named Dorem Display, and won the 1945 Best in Show at Westminster, England.

2. King Schnauzers can be very vocal.

Between the tendency of the Cavalier King Charles Spaniel to get “yappy” when anxious or lonely, and the Miniature Schnauzer’s watchdog alarm bark, you may end up with a very vocal dog.

Though personality has much to do with it, early training will help teach a King Schnauzer when it is and is not appropriate to bark.

The King Schnauzer may have a regal name and bearing, but if you don’t groom their beards and mustaches frequently… you may end up with a hobo instead of a monarch!

Just like human facial hair, the King Schnauzer’s long beard fur can pick up food and dirt and will get snarled and wild without attention.

Temperament & Intelligence of the King Schnauzer

The King Schnauzer is an alert, friendly, and bright dog. They are eager to please, but also quite spirited. Even if they are a bit more independent than their Cavalier King Charles Spaniel parent, however, King Schnauzers are also incredibly loyal to their family and rarely roam.

These little dogs can be reactive to sounds and movement, thanks to the ratter heritage of the Miniature Schnauzer. They also make good watchdogs. And though they get along easily with most humans and other dogs, King Schnauzers tend to only bond with one person.

A dog of moderate energy levels and exercise needs, what King Schnauzers really relish is spending time with people. Whether it is grooming, walks, or just hanging out nearby, King Schnauzers love getting attention and being able to keep an eye on their family.

The generally easy-going nature of the King Schnauzer makes them well suited for a family. Even if they do bond with one person in particular, they still love being around people.

A wonderfully even-tempered dog, King Schnauzers are good with kids. However, it is always a good idea to socialize your dog with children early on and teach your kids how to respect boundaries. With healthy mutual respect, this agile little dog will make an excellent playmate and friend to younger family members.

While individual personality has a lot to do with it, the King Schnauzer breed is often friendly with dogs and cats alike. Socialize your pets with one another early on to avoid any possible friction.

Because of their history as ratters, however, you should never trust your King Schnauzer with prey animal pets. We know there are exceptions to the typical predator-prey relationship, but strongly discourage anyone from trying to reproduce those unique situations. Better safe than deeply sorry!

Things to Know When Owning a King Schnauzer

Choosing to add a dog to your family, and then choosing the right breed, are enormous life decisions. To help you fully consider the responsibilities that this breed entails, we have included this section of further information about the King Schnauzer’s care and upkeep needs.

Quality kibble is an excellent way to make sure you are giving your King Schnauzer a nutritionally varied and balanced diet. Diverse ingredient lists with animal and plant-based sources of nutrients are often a sign of a high-quality brand.

Feel free to treat your pooch to lean proteins like fish, vegetables, and even fruits sometimes too. You may be surprised to see the joy with which your dog plows through carrots or sweet potatoes! Your vet can help you find safe foods to try out, as well as make sure you are portioning their food appropriately.

The King Schnauzer is a dog that needs a moderate amount of exercise daily. They are spunky and enjoy playing, but do not possess the stamina and high energy levels of some other breeds. A daily walk and plenty of opportunities to play will suit your King Schnauzer fine.

Their small size and manageable energy mean that the King Schnauzer makes an excellent dog for those who do not have their own fenced-in yard or are apartment dwellers. We still recommend taking your little friend to a dog park or rural area regularly, but it is not a daily necessity for this breed.

Smart and eager to please, instilling reliable recall and other basic commands in your King Schnauzer should be manageable even for a less experienced dog owner.

Some dogs of this breed do have a bit of a stubborn streak. But with patience and firm, positive training you can both have fun learning to communicate… just don’t forget those tasty, motivational snacks!

Your King Schnauzer may have a double coat from their Miniature Schnauzer parent, or a single coat. In either case, these dogs are moderate shedders and will need regular brushing and a haircut about every two months.

Be sure to comb the mustache and beard too, or you might find your friend starts to look less like a “king” and more like a train-hopping vagabond!

As for preventative care, clean your dog’s ears and teeth regularly to avoid infections. Also, due to the unlikelihood of your King Schnauzer wearing down its own nails, you will need to check and trim those periodically.

There are a number of inherited conditions that can afflict the Cavalier King Charles Spaniel and the Miniature Schnauzer, but fortunately hybrid breeds like the King Schnauzer are much less likely to fall prey to these than purebred dogs.

Nevertheless, there are still some health concerns to watch out for.

Though personality traits are much more based on the dog itself than their sex, there are a few physical differences between female and male King Schnauzers. Male dogs grow just a little bit larger and are more disposed to sexually aggressive behaviors such as mounting and territory marking. The female King Schnauzers are on the smaller side and can be somewhat aloof.

Final Thoughts on the King Schnauzer

So, is the King Schnauzer the right dog breed for you?

If you are looking for a small and adaptable dog that you can keep in an apartment, they make a good choice. The King Schnauzer is perfect for any individual or family looking to welcome a spunky, sweet, and attention-seeking dog into their home and heart.