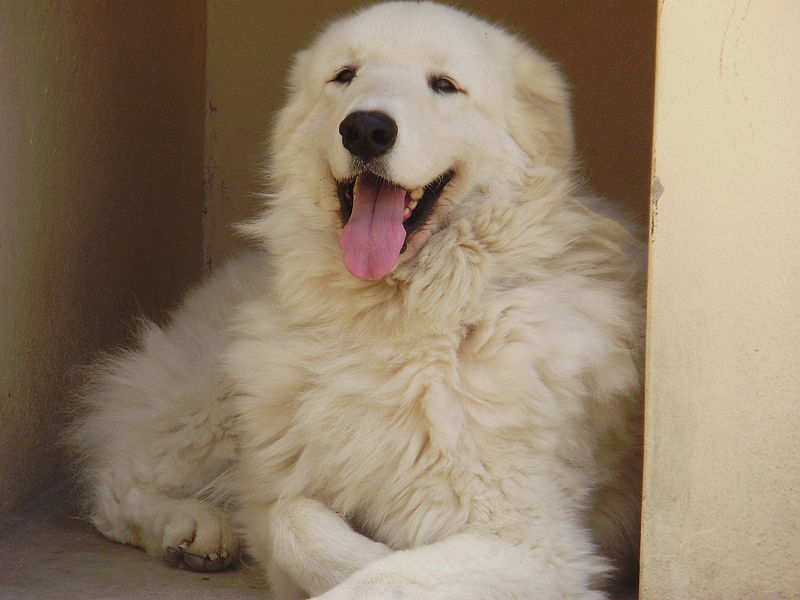 The Kuvasz is a flock-guarding dog that originates from Hungary. When kept as a pet, they are very protective of their humans. They need plenty of space, however, and while they do not necessarily need lots of long walks or runs every day, they do need the opportunity to charge around once or twice a day.

They are not suited to life in an apartment, and given their need to inform you of anything and everything that might be approaching, they are best suited to properties that are not near their neighbors. Despite this, they are kind and gentle dogs, forgiving, and patient with their owners.

They are also highly independent and tend to do best when allowed to think for themselves. As a result, they can prove difficult to train. They are not considered suitable for first-time owners, because of this combination of guarding and independence.

Kuvasz Puppies – Before You Welcome One Into Your Family

3 Little-Known Facts About The Kuvasz

1. They are originally from Tibet.

Although it is now known as a Hungarian breed, the Kuvasz originates from Tibet. They were known as the Ku Assa, which means the dog of the horse, and were taken to Hungary in 2,000 B.C. by the Magyar tribes. The Hungarian farmers then bred the dog to be bigger and they were used to guard livestock against predators. Their size was intimidating, while their fierce loyalty meant that they would easily protect any animals in their charge.

While they were known for guarding livestock, the Kuvasz also guarded members of the Hungarian Royal Family. Matthias Corvinus, the former king of Hungary, admired the dog so much that he would only allow certain members of noble families to own them. He trusted them more than his own guards because it was common for guards and people to attempt to assassinate royalty at the time.

During World War II, this incredible breed almost became extinct in Hungary. The breed was known to protect their families, so invading soldiers hunted the dogs down and killed them. It is believed that less than 30 of the breed were left after the end of the war. Although they still remain quite rare, their numbers have increased since that time. However, the Kuvasz is still a rare site outside the borders of Hungary.

Temperament & Intelligence of the Kuvasz 🧠

The primary trait of the Kuvasz is that of the protector. He will do everything he can to ensure that his family is protected. He will do this independently, which means that you will need to set boundaries early to ensure that he integrates well into the family. With that said, he can become a loyal member of your family unit.

The Kuvasz is an independent dog, but he has long been prized for his ability to guard and protect his family. This trait remains strong today, and he will form a close bond with his owners, even if he isn’t particularly interested in love and cuddles.

He can be very protective over family members, so he needs to be taught boundaries, otherwise, he can become aggressive towards strangers. This includes friends of the family and friends of your children.

The Kuvasz is independent. He will not usually get along with other dogs, whether at home or while on walks. He may not be aggressive, but he will not show any interest in meeting other dogs and he may do what he can to get away from them. If you do intend to introduce him to another family dog, try to ensure that they are both young and always ensure that the meeting is calm and slow.

Similarly, the Kuvasz can live with cats, in fact, he may well look to protect them because he will view them as being part of his herd.  Slow introductions are necessary because the Kuvasz’ stature means that he can be intimidating to cats and other smaller animals.

Things to Know When Owning a Kuvasz:

The size and independence of the Kuvasz breed mean that he is not suitable for all owners. Before buying one of this unique breed, consider the following factors:

The Kuvasz is a big dog, and he has reasonably high energy requirements. As such, he can eat a lot and you should expect to feed around 3.5 cups of food each day, ideally split into two or three meals. Don’t leave food in his bowl, or he may act to protect it.

The breed is very large and requires a lot of exercise, but they will prefer independent exercise. Ideally, they will be allowed to prowl over large areas of territory, which can include the backyard, but this will need to be securely fenced to prevent them from getting out and prowling elsewhere. You should also provide your Kuvasz with at least an hour of walking each day, ideally more than this. If they are left indoors, they can become restless, especially if they are alone, and a restless Kuvasz can quickly destroy your property.

The Kuvasz is a very independent dog. He has been prized for his ability to make his own decisions when left alone to look after herds, and he maintains this level of independence today. This means that it can be a serious challenge to train this breed, and you will need to show consistency and be a leader. Be patient, make learning fun, and ensure that he gets plenty of socialization as well as training from a young age. This training difficulty is one reason why the breed is not considered a suitable dog for first-time owners.

The coat of a Kuvasz can grow as long as 6 inches. It is used to protect him from the cold and rain, but it can become matted and knotted if it is left. You should brush once a week, and consider a conditioning spray to help keep your dog in the best possible condition. He will shed heavily in the spring and will require more frequent brushing during this time.

You will also have to clean his teeth, ideally three times a week, and clip his nails if you can hear them making a loud noise on hard floors.

Happily, his coat repels water, dirt, and odors, and you should not bathe the Kuvasz unless it is absolutely essential. Regular bathing can strip the coat of natural oils that protect it from damage and that helps protect the skin.

The male of the breed can grow larger than the female, both in height and weight, but there are few known differences in temperament and behavior between genders.

The Kuvasz is a Hungarian breed prized for his protectiveness and his independence. However, these traits can make him a difficult family pet to own and will make him a challenge to train. You will need to start training from a young age, ensure that he is well socialized, and provide him with jobs and exercise daily to keep him well adjusted. If you do that, though, you can end up with a loving and protective member of the family that will get on with the children and protect your home.

This breed is not considered suitable for first-time owners and he will not do well in an apartment because of his size and his desire for time outdoors. He will thrive in a property that has a large, fenced-in yard where he can prowl and walk around. Prepare to feed him plenty and also be prepared for considerable brushing, especially during the spring, as well as admiring looks and comments.