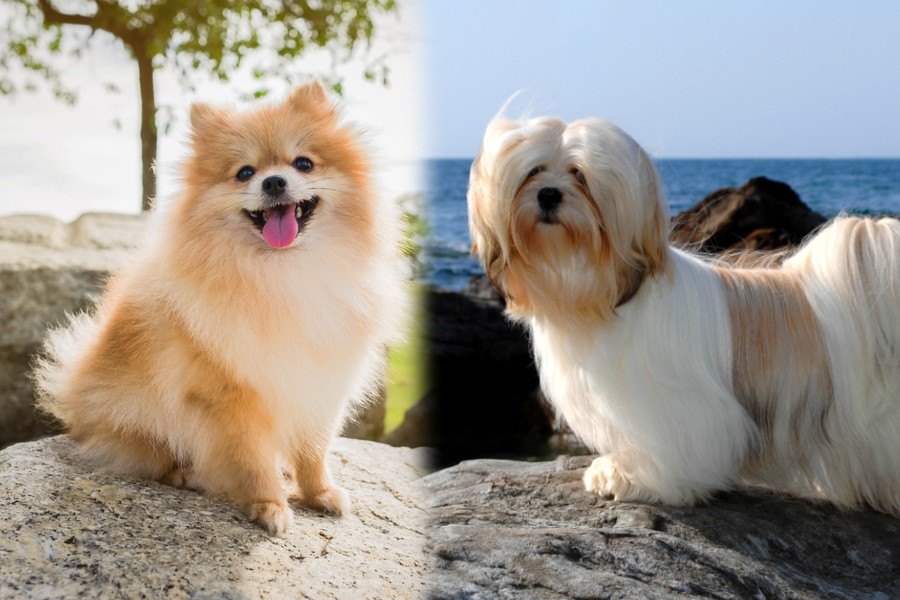 If you’re on the hunt for a peppy, pint-sized pooch that is quite the little looker, set your sights on the La Pom designer breed. The result of breeding a Lhasa Apso with a Pomeranian, this companion dog is ideal for just about anyone who is seeking a cuddle buddy.

A big personality contained in a tiny package, the La Pom is a cheerful and playful pup who is ideal for households with little space. Complete with a gorgeous, plush double coat and an adorable face, the La Pom is guaranteed to steal your heart.

If you’re considering adding a La Pom puppy to your family, here is everything you need to know about buying a puppy, your new La Pom’s personality and trainability, and her health and happiness requirements.

La Pom Puppies – Before You Get One…

So, you’ve been on the lookout for a great designer dog and now you’re thinking of bringing a cute and cuddly Lhasa Apso Pomeranian mix breed into your home. While the La Pom is a wonderful addition to almost any family, it’s imperative to know where your new puppy comes from.

With the rise in popularity of designer dog breeds, comes the rise in puppy mills. Also known as a “puppy farm,” these commercial dog breeding facilities are often characterized by poor conditions and quick breeding. It is estimated that as many as 10,000 unlicensed puppy mills are currently operating in the United States. And while it can seem appealing to save a few hundred dollars on a cheaply priced puppy, the long-term consequences of purchasing a dog from a puppy farm can be dire.

What Should I Look for in a Breeder?

Whether it’s from an online or back page ad, you should avoid buying from puppy mills at all costs.

Some telltale signs of a puppy farm may include:

Buying a La Pom puppy from a backyard breeder or puppy farm may seem like a cost-effective way to score a great designer dog. However, your new addition to your family may be littered with health and behavioral issues.

Dogs from puppy mills can have behavioral problems that include:

It’s critical to thoroughly do your research on a breeding facility before you buy.

3 Little-Known Facts About the La Pom

If you suffer from allergies but still want a dog, the La Pom may be ideal for you. She doesn’t shed as much as other breeds, making her a good bet for living nearly symptom-free.

Your La Pom’s Pomeranian parent breed is actually descended from large sled dogs and used to weigh as much as 30 pounds. They were eventually bred down to their small size by Queen Victoria of England.

3. She’s from an Ancient Lineage

The Lhasa Apso parent breed can be traced back to 800 AD in Tibet. The breed lived in isolation with monks for centuries deep in the Himalayan Mountains.

Temperament & Intelligence of the La Pom🧠

To fully understand the personality of your La Pom, it’s important to know the temperament and intelligence of her two parent breeds, including the Pomeranian and the Lhasa Apso.

The Pomeranian is a friendly and perky little dog. Despite their small stature, they are super courageous and have been known to verbally threaten and even tackle bigger breeds. Highly intelligent and extremely active, the Pomeranian needs daily exercise. A tad independent, they thrive with firm and consistent training with positive reinforcement techniques. When older, they adore being little lap dogs.

Considered to be an “easy keeper,” the Lhasa Apso was originally developed to be a guard dog and thus can be stubborn, aloof, and vocal about strangers. When socialized from an early age, they make family-friendly pets who are deeply affectionate. A lively breed, they thrive on daily amounts of exercise.

Your La Pom can inherit any combination of the aforementioned temperament traits discussed above.

If properly trained and socialized from an early age, the La Pom makes an incredible family pet. It’s important though to thoroughly teach your children about living with a new dog. They should never play aggressively with the dog, never bother her when she is eating or sleeping, and move slowly and calmly around her.

Just as with small children, La Pom dogs will get along perfectly with other pets, including dogs and cats, if socialized around them from the get-go.

Things to Know When Owning a La Pom

Now that you understand more about your La Pom’s personality and intelligence, let’s take a look at everything you need to know about caring for her.

You should be feeding a La Pom one cup of high-quality, high-protein, grain-free kibble formulated for a small dog with moderate energy once per day. The monthly cost of her food will be about $30.

This breed doesn’t have any breed-specific diet requirements. However, it’s important to note that your La Pom’s dietary needs will change throughout her life. Always consult with your vet if you have questions about feeding your La Pom.

The La Pom can be considered to have a medium activity level. Therefore, she doesn’t need hours of exercise to remain happy and engaged all day long. This is why they make great dogs for city living.

Play with your dog for about 45 minutes every day and aim to talk her about five miles per week. If you have a backyard, let her romp, play, and explore. Taking her to a dog park twice a week is also a great way to wear her out.

La Pom pups are super smart pooches. To boot, the Lhasa Apso is a definite people-pleaser, making your La Pom effortless to train. This designer breed flourishes with treat-motivated training, so positive reinforcement training methods work best for this breed.

Your La Pom’s long, dense coat will need to be groomed daily with a slicker brush and comb to prevent knots and matting. Remember to clean her ears and trim her nails as needed.

Overall, the La Pom is an extremely healthy breed. However, there are some medical issues that you should keep an eye out for as she ages, including tracheal collapse and Legg-Calve-Perthes Disease.

The male La Pom can be slightly larger than his female counterpart. However, both genders do not have any major personality differences. Whether you bring home a boy or a girl La Pom, you’ll adore them both!

If you want to add a sweet, adorable little dog to your household, the La Pom is a perfect choice. Great with kids and other pets, this people-pleasing pooch is highly trainable and very affectionate.

For those seeking a dog that will do well in an apartment, the La Pom is a great choice. Just remember to socialize your puppy from the start to ensure she’s a friendly companion for years to come.