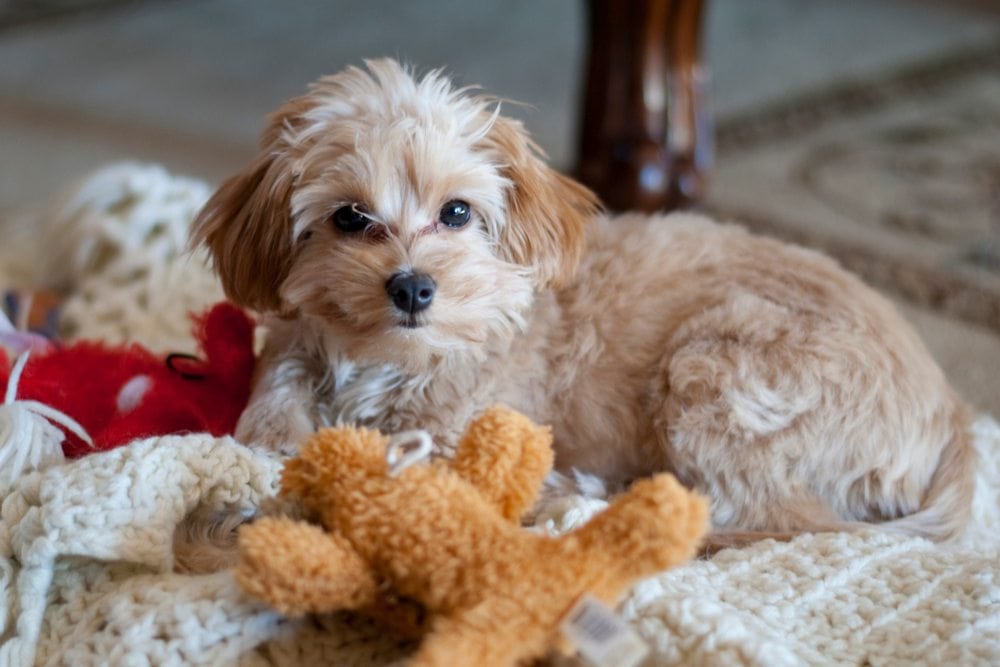 The Malchi, also called the Maltechi or Malachi, is a cross between the Maltese and the Chihuahua. Like his parent breeds, the Malchi is full of heart and has a loud voice. He is extremely caring and loving but will require a lot of early socialization and training to ensure that he mixes well with other animals or children. He makes a great companion dog and requires very little exercise, which makes the Maltechi a great companion for elderly couples and individuals.

This breed is a designer breed and is still relatively new, having only really been introduced in 2000. As such, a lot of the information about this breed is taken from his parent breeds.

The Malchi can suffer from small dog syndrome – he will think he is bigger than his diminutive size, which means that he might tend to try and bully other dogs, even those that are much larger than him.

Malchi Puppies – Before You Buy…

What’s the Price of Malchi Puppies?

The Malchi breed is still relatively new but it has become a popular choice of small companion dog, especially with older people. Although breeders are not found in all areas, as yet, you should expect to pay between $500 and $1,000 for a puppy.

1. Maltese Were Used as Trade Goods

Although the Malchi is a new breed, its parent breeds are not. The Maltese were used as a trade good by Romans and Greeks. He was traded as a luxury good, primarily to wealthy women, and he became popular as the subject of poetry and paintings.

Its use as a trade good meant that the Maltese quickly spread around the world, but it wasn’t until the late 19th century that he became a recognized breed in the USA. Once recognized, however, the Maltese became a very popular breed, and remains so today.

2. Your Malchi Will Bark

The Malchi is a combination of placid Maltese and fiery Chihuahua. Although your dog’s temperament will depend on which parent he gets the most attributes from, it is highly likely that he will bark.

The Chihuahua might be small but he believes he is much bigger than his size and this does tend to pass on to the Malchi breed. As such, and despite his seemingly appropriate size, the Malchi is not considered a good apartment dog. Your neighbors are likely to complain about the constant yapping.

3. Chihuahuas Were Believed to Be Spirit Guides

The Malchi is bred from the Maltese, which was believed to have healing powers, and the Chihuahua, which was widely regarded as being a spirit guide that prepared and protected the recently deceased on their journey to the afterlife. One of the crossbreed’s names is Malachi, who was a biblical prophet and one of the Twelve Minor Prophets. Even the name means Messenger.

Temperament & Intelligence of the Malchi

The Malchi might be a small dog, but he tends to forget that. He believes he is much larger and will let all other dogs know it. He gets this from his chihuahua heritage, which is also responsible for his loud-mouthed tendencies. The Maltese Chihuahua mix will bark to let you know of visitors, whether they are people, cats, other dogs, or even cars and bicycles in some cases. As such, the Malchi is not to everybody’s taste, but below the vocal exterior is a caring, loving, happy, and playful little dog.

The small size of the Malchi, coupled with the minimal exercise requirements, make this breed a great companion dog, and it has become a popular breed with elderly people looking for company.

Training is possible, but it will take consistency and a lot of effort because the chihuahua in your Malchi makes him headstrong and a little stubborn. With that said, the breed is popular at agility classes and for agility shows, so there is certainly potential.

The Malchi has several traits that mean he is not considered suitable as a family pet. Your Malchi is a small dog and children tend to reach out and grab at ears and other body parts. This can scare your Malchi and make him defensive and potentially aggressive.

This breed tends to be better suited to a quiet life because constant noise and movement will lead him to bark even more than usual. He may also tend to bark at night if he hears noises, and the ruckus will easily wake small children.

Similarly, this crossbreed is better in a home with no other pets. With good training, it is possible to mix him with other animals, but his tendency to bark and the possibility that he will snap when angered make him unsuitable for living with cats. His dominant nature, combined with his somewhat small size, means that the Maltese Chihuahua cross is not suited to life with other dogs either.

Things to Know When Owning a Malchi:

The Malachi is a popular small crossbreed that tends to flourish as an only pet and only child. He will do well with older people, requires very little exercise, and should have a decent lifespan relatively free of health complaints. Before buying or adopting a Malchi, consider the requirements and facts below.

The Malchi is a small dog that does not expend a lot of energy, so he doesn’t have excessive or expensive dietary requirements. You should only have to feed the equivalent of a cup of dog food a day, so it is best to invest in high-quality dog food to ensure that your dog gets all his nutritional requirements this way.

Take care that you don’t overfeed your dog. This can be a problem with any animal, but especially small dogs that do not get a lot of exercise. He will quickly put on weight if you feed too much or if you offer too many treats, too often.

This breed does not have high exercise requirements. In fact, your Malchi will welcome some exercise every day so you should aim to provide 30 minutes. This can be in the form of a decent walk or indoor play, but if he gets too tired you might find him difficult to move.

Once playtime is over, your dog will be happy to come and sit on your knee to relax and receive some attention. This breed can do very well at agility, although it will depend on the actual energy level of your dog. Some Maltese Chihuahua mixes don’t show any interest in this type of training or activity.

Early training is important for any dog breed. It helps ensure that a dog does not adopt any antisocial or bad behaviors, and it can have added benefits of mentally and physically tiring your puppy out. Attending puppy classes is also a great way to socialize your dog.

Social skills can be lacking in the Malchi. They tend to bark at other dogs and can shy away from new humans. They are especially wary of children. Early training should be geared towards socialization and teaching your puppy how to respond when meeting new friends. There are also a lot of reports of this breed offering more of a challenge when it comes to house training.

Dogs with a pure white coat tend to have higher maintenance requirements, and the Malchi is no exception. If your dog does have brilliant white in its coat, it is going to be prone to staining from food, grass, and virtually anything else with a strong color. To keep your dog free from stains will require vigilance on walks, and it will necessitate regular baths with particular attention to the facial region. Clean out the ears, too, but ensure that you dry them properly because Malchi have folded ears that pose a risk of infection.

The Malchi combines the short-haired chihuahua with the longer-haired Maltese and combines their grooming requirements. You will need to brush your Malchi two or three times a week to prevent the fur from getting matted and knotted.

Dogs that receive regular exercise, especially on sidewalks and roads, tend to have quite short nails, but the Maltese Chihuahua mix requires minimal exercise. You will need to ensure that his nails are kept trim. Consider cutting nails when you hear them clipping and scraping on the floor because this means that they are getting too long.

There are a number of minor health concerns that are known to manifest in the Maltese Chihuahua mix, but most can be treated by a veterinarian and with close attention. There are concerns from ear and eye infections and your Malchi may be prone to intestine and digestive problems.

There are no major differences between the male and female of the Malchi breed. Both sexes are expected to grow to a similar size, although male dogs can be a little larger than the female.

The Malchi is a new designer dog breed, created by combining the feisty Chihuahua and the more laid-back Maltese. The resulting breed is a small dog that requires minimal exercise but with a tendency to bark and make noise. It is considered suitable for elderly owners and, while its exercise needs make it an appropriate breed for apartment living, its bark makes it inappropriate for living in a confined space close to neighbors. Despite its small size, the Malchi makes a decent guard dog because of its bark and because he will alert you to any visitors, whether expected or unwanted.

Unfortunately, this breed does suffer from several known health problems, and it can have high maintenance requirements, especially if it has adopted fur length and characteristics from the Maltese parent breed.

3 Types of Rottweiler Dog Breeds & Their Differences with Pictures