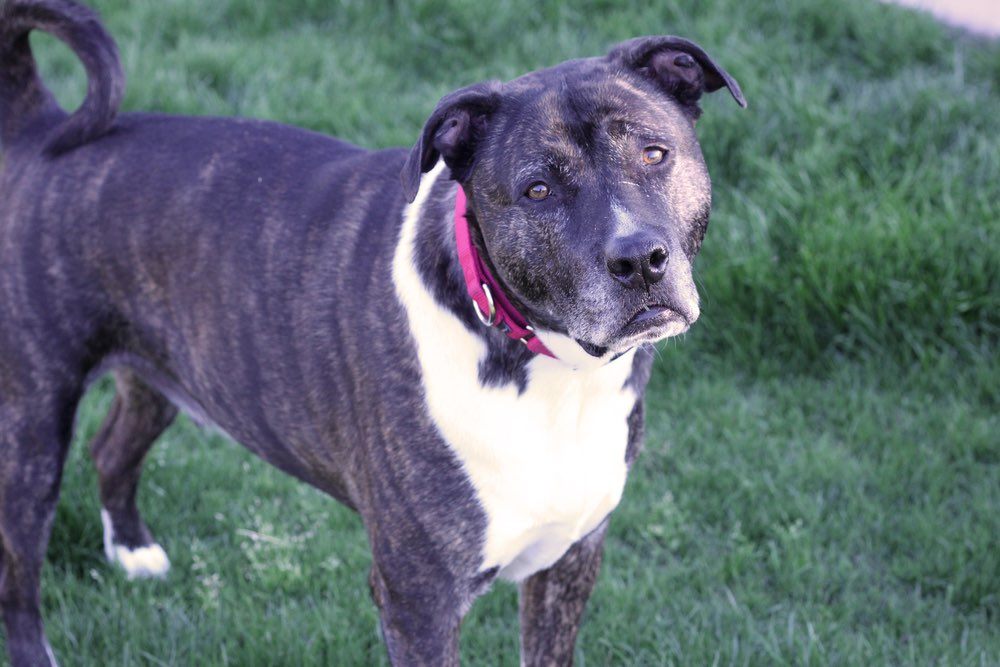 If you’re in the market for a loving, affectionate lap dog, you can’t beat the American Masti-Bull. Sure, you’ll need a big lap to accommodate the American Bulldog mixed with Mastiff, but don’t tell them that — they see nothing wrong with curling up on top of you and watching a movie.

That doesn’t mean they can’t put on a good show when the situation calls for it. They make formidable guard dogs, as there are few evildoers out there who will risk going head-to-head with one of these brutes.

American Masti-Bulls are wonderful dogs but they’re relatively new. As a result, you may not know much about them. Luckily, that’s about to change, as the guide below will fill you in on everything there is to know about these pups.

American Masti-Bull Puppies — Before You Get One…

American Masti-Bull puppies are as large as some full-grown dogs, so there’s never any doubt as to how massive these mutts will end up being. However, these dogs are so adorable as puppies that many people often adopt them without giving it the proper amount of thought.

Once they’re fully mature, these dogs are huge, but fortunately, they’re also low-maintenance. You won’t have to spend a ton of time exercising them, and they’re happy to hang out in the living room with the rest of the family.

The food costs are exorbitant, though, and you should expect a whopper of a vet bill every now and then. They can also be prone to behavioral issues if not properly trained and socialized.

Still, they’re wonderful dogs, and they’ll make a great addition to nearly any family. Just keep in mind that your home will get smaller after you bring one into it.

1. You better know how to swim, because these dogs drool.

When you combine two breeds that are already known for having overactive salivary glands, you get a mix that can flood your entire house.

It may sound adorable and it often is. However, it can be frustrating when you’re trying to leave the house, and you discover that your new clothes have dog slobber caked on them.

It’s just one of the things you’ll have to deal with when you own an American Masti-Bull. They love you, and they’ll leave the drool trail to prove it.

2. They have no idea how big they are.

This is a behavior that can be filed under “cute, but only up to a point.” These dogs think they’re as tiny as your average Shih Tzu, and they’ll try to curl up in your lap just like one of those dogs.

However, they generally weigh well over 100 pounds. That’s so much canine to pile on top of a person, and they love to put their entire weight on their elbows. It can definitely get painful at times, and you’ll need to keep small children clear.

Also, they have no idea where their feet are at any time, and they will definitely step on you.

3. They love being the center of attention.

While their exercise needs are fairly minimal, that doesn’t mean that Masti-Bulls are low maintenance in other areas. They constantly crave affection — and at their size, they have no problems getting it.

This means that while these dogs will let you spend an entire day binge-watching Netflix, they’ll expect you to be petting them that entire time. It’s a good trade-off, one that we’re sure you’ll be happy to make.

Temperament & Intelligence of the American Masti-Bull 🧠

While American Bulldogs are smart, English Mastiffs are not, and Masti-Bulls usually take after their British forebears in the brains department.

They make up for it by being incredibly sweet, though. They may not know what you want them to do, but they’d love to make you happy; this can lead to adorable misunderstandings. Still, they’re easy enough to train if you have enough patience.

They can have a bit of a stubborn streak, so you’ll need to be firm and confident in how you handle them. After all, the last thing you want is for your 100-pound dog deciding that they’re the boss.

Masti-Bulls are fun-loving and affectionate, but they can quickly get serious if they perceive a threat. They will not hesitate to protect their families, making them great guard dogs (and equally good babysitters).

Despite their agreeable nature, they have sad-looking faces, especially their solemn eyes. As a result, many people can’t help but lavish them with affection in an attempt to “cheer them up.” The dogs, of course, do nothing to discourage this.

Masti-Bulls are fantastic family pets — provided that you do the work to train and socialize them.

They love children, and they’ll guard them like they’re their own puppies. However, that protectiveness can sometimes be an issue, especially if your kids have friends over who like to roughhouse. That’s where the training and socialization come in.

Also, these dogs have no idea how big they are. If they get rambunctious, they can easily step on or bowl over a small child. You need to teach them to be aware of their surroundings; you also need to teach your kid how to act around the dog.

If you want a dog for protection, you can’t do much better than a Masti-Bull. They have formidable barks that broadcast just how big they are; there are few criminals brave enough to risk entering a house with one of these monsters inside.

Despite their size, they’re fairly lazy, making them great choices for apartment dwellers.

This largely depends on how well the dog is socialized as a puppy.

If you raise a Masti-Bull with other pets, they’ll likely tolerate them. They’re often playful with other dogs and non-reactive toward cats and similar pets.

However, both parent breeds were originally bred as fighting animals, and there may be residual violence left in their DNA. Don’t trust them around other dogs unless you’re absolutely certain that they’ll be okay.

Also, be careful about resource guarding with these dogs. They may get along great with other animals — until somebody gets too close to the food bowl, a favorite toy, or even you. If your Masti-Bull is an aggressive resource-guarder, you’ll need to spend time training that behavior out of them.

Things to Know When Owning an American Masti-Bull

American Masti-Bulls aren’t a particularly difficult breed to own, but there are still a few things you should know before you add one to your pack.

This may come as a shock to you, but these dogs eat a lot. You’ll have serious kibble costs to keep up with if you adopt a Masti-Bull, so expect to go through at least a bag or two per month.

That doesn’t mean that you can just load them up on calories, though. Obesity is a huge problem with this breed, and it’s terrible for them, so you need to make sure your pooch isn’t carrying any extra weight.

We recommend a high-protein diet, especially one that’s made with high-quality meat sources. Avoid anything with animal by-products. Also, avoid wheat, corn, and soy, as these are packed with empty calories, precisely what you’re trying to avoid.

Don’t let them free-feed either. Portion control is important with larger breeds, as many of them will eat until they run out of food. The portions will still be big, of course, but they shouldn’t be unlimited.

Consider adding a glucosamine supplement to their food, as they’re prone to joint problems as they age.

Masti-Bulls need daily exercise, but those needs are minimal compared to many other breeds. A brisk walk, lasting 30-60 minutes, is often all they need.

They love to play, and they can spend hours pulling you around the house with a rope toy. They’re fond of wrestling and roughhousing as well.

Be careful not to overdo any exercise regimen you put them on. Low-impact exercises are best, as you don’t want to put too much strain on their joints.

That means avoiding activities like agility training or anything that involves running and jumping (especially on hard surfaces). Swimming is great for them, though.

While it’s easy to push these dogs too far, don’t let that tempt you into skipping their workout entirely. If they’re not properly physically and mentally stimulated, they can become destructive.

Training and socialization are extremely important for Masti-Bulls. These dogs are so big that it’s essential that they’re obedient, or you could have big problems on your hands.

They may be a bit of a pain to actually train, as they’re not that bright and can be stubborn. You need to be calm, firm, and confident, or else you’ll have a hard time getting them to cooperate.

Only use positive reinforcement when training them, as they’re surprisingly sensitive. If you’re too harsh, you’ll hurt their feelings, which will end up being counterproductive.

If you’re struggling to train your Masti-Bull, don’t hesitate to consult a professional. However, they’ll need to teach you how to train the dog, not do it for you.

Masti-Bulls have short, bristly coats and shed quite a bit. They’re hard to groom, so you’ll need to invest in a slicker brush and spend the time using it.

You need to pay special attention to their ears too. Any floppy-eared dog can be prone to ear infections if you don’t keep them clean, so wipe your dog’s ears down with a damp cotton ball every week or so.

Other than that, their grooming needs are fairly basic. Brush their teeth every day, bathe them every few months, and trim their nails as needed.

The sad fact is that larger breeds are often more prone to health issues than smaller ones, and the Masti-Bull is no exception.

Unfortunately, the breed is prone to a variety of health issues, both large and small.

Males tend to be significantly bigger than females. That often means several inches of height and as many as 20 pounds in weight.

That doesn’t mean the ladies are small, though. They’re still massive animals and usually weigh over 100 pounds.

As far as temperament goes, both genders are fairly similar. Males might be a bit more clingy, while females are a bit more stubborn, but neither are worth noting.

American Masti-Bulls are gentle giants, and they make incredible guard and family dogs. They really love their people, and they’ll do anything necessary to protect them. Plus, they’re low maintenance and easygoing.

They’re not perfect, though. They have health issues, they’re expensive to feed and maintain, and they need to be properly socialized to avoid behavioral issues.

If you have the budget to support one of these dogs, you’ll have a loving, loyal companion that will go to the ends of the Earth for you.