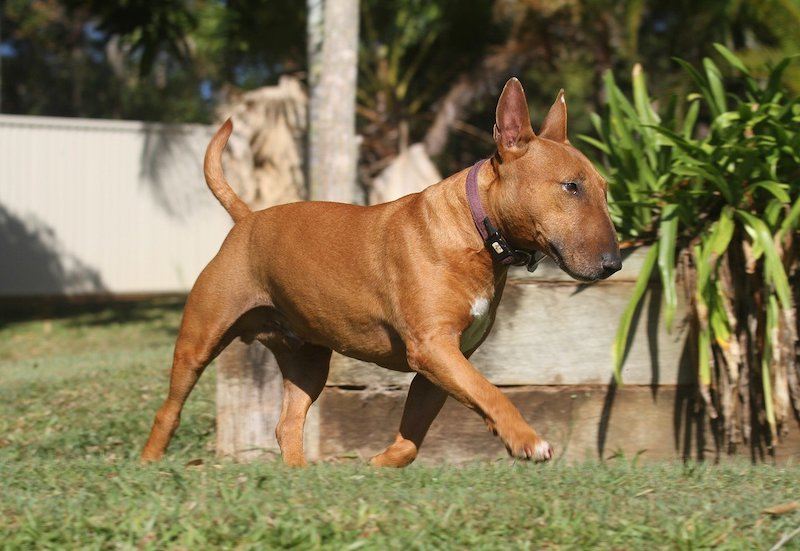 The Miniature Bull Terrier is a dog that looks like they have a perpetual gleam in their eyes, ready to pull their next stunt. They are often called the “kid in a dog costume” and have become known as the clown of the dog kingdom.

Their appearance is a sort of a cross between clownish and regal, with elongated, friendly faces, pointed ears, and a coat that is short and stiff. They are full of fire, typical to Terriers, and have an air of utter fearlessness about them.

The average price of a Miniature Bull Terrier is about $1,300. They have many strong purebred lines that breeders use to obtain quality puppies. It exponentially increases their overall cost. It also means that you need to budget much more than if you want a dog from a quality breeder and an excellent pedigree.

If you are looking for a strong bloodline dog, expect to pay between $3,000 and $6,000. There are few breeders for these dogs, but research to ensure that the breeder you have found has a good reputation.

They should be willing to show you anything you need to know, including the parent’s health records, the area in which they breed the dogs, and all their registration papers.

It is vital to clarify the confusion surrounding these two similar breeds, the Bull Terrier and the Miniature Bull Terrier. They are somewhat related, although they are seen as two different breeds and have separate sets of ancestors.

The Mini Bull Terrier predates what is known as the Standard Bull Terrier. The Mini came about when they were first crossed with an Old English Bulldog and the White English Terrier. The latter, which forms the ancestral roots of almost all modern Terriers, is now extinct.

The Bull Terriers split away from this original line when larger Spanish Pointers were bred with them, and some theorize Dalmatians were as well. It produced a taller Terrier with similar features and different color patterns.

Due to their increased size, the Standard Bull Terriers’ popularity increased faster than that of the older Minis. The English Bulldog that was originally used in their breeding is now far removed from their bloodline, although they can still be seen in some of their statures.

Although they have been considered by most of the world as separate for many years, the AKC only separated the two breeds in 1991.

2.  Their history is steeped in gladiator-like fighting scenes.

The Mini and Standard Bull Terriers were used as fighting dogs in the olden-day English dogfighting scene. They have a fierceness about them that is only intensified by their fearlessness. They have incredible amounts of energy and endurance. Their streamlined stature hides layers of wiry muscle underneath.

Once the gruesome sport had ended, the dog’s popularity didn’t greatly diminish as with similar breeds. Since they were good runners, as well as fighters, they were commonly used as ratting dogs.

They could put up a chase along the ground for any number of small mammals instead of those “go to the ground” pups, like the Dachshund, who would chase into the animal’s holes.

3.  The Bull Terriers history is a classic “rags to riches” story.

Due to their similar appearance, the Mini and the Standard Bull Terriers share a common history. They are commonly considered to be “so ugly that they are cute.” This appearance has not served them well in the past.

In the early 1800s, during their fighting era, the dogs were snubbed by other social classes because they were associated so heavily with a questionable type of people. They lacked the cute, affable look of some of the other dogs that came out on the other side of the abolition.

Those devoted to this dog breed took matters into their own hands at the time, and this is when it is believed that they were crossed with Dalmatians. These were a well-respected breed that had friendlier features. The result was a success. Bull Terriers became a fashion statement for those in the elegant, upper class.

They continued to cross the dog with other Terriers, like the Staffordshire, so there would be more variation in their color. The Miniature Bull Terrier did not experience as much crossbreeding as the Standard size, but they did reap some of their increase in popularity. They were recognized as a distinct breed by the English dog clubs in 1939.

The words comical and mischievous sum up the Miniature Bull Terrier as a whole. They are highly intelligent and enjoy playing games with their human counterparts. They are a loving dog but don’t fawn over their family. They are not prone to experiencing separation anxiety.

The breed has never lost their desire to protect and defend. They can be trained to be capable guard dogs. When it comes to strangers, the dogs range from friendly to cautious, but they always have a heightened sense of awareness.

They are comical pups who like to play. They need plenty of exercise to keep them from being destructive with their games.

Miniature Bull Terriers are excellent family dogs. They tend to behave well around small children, but it is better to be placed in families with older average age. There is less chance of any aggression with older kids who know how to respect them.

The Miniature Bull Terrier is typically useful to have with other dogs. They like to play around, so having a similar size or larger dog is good for them. They can distract the Minis from wreaking any havoc around the home.

It can be challenging to have a Mini Bull Terrier in a home with other dogs that are much smaller than them or other cats or rodents. Due to their years of training as ratters, they have a high prey drive. If they are left to their instincts, they might do these smaller creatures some harm or chase them relentlessly.

Things to Know When Owning a Miniature Bull Terrier

The Miniature Bull Terrier is a small to medium-sized dog. They only need around 1 cup of food each day. Mini Bulls can be prone to gaining weight quickly if they do not receive appropriate amounts of exercise. Make sure that their diet is suited to their age.

They respond well to training with treats. However, these should make up only 10% of their entire diet. Check with your vet if you have any questions regarding your pup’s daily amount of food, the best brands, and what treats are safe.

Miniature Bull Terriers are not considered a high-energy dog, but they are quite lively and like to be active. They give in to chasing their tail incessantly if they have not received enough exercise during the day.

These pups are up for all kinds of activities, including long walks, running, hikes, agility training, or trips to the dog park. Taking them to the park also helps train them in early socialization to know how to behave better.

If you like to take them out yourself, aim for a distance of 6 miles each week. Every day, they should get around 60 minutes of consistent activity.

The training of a Mini Bull can be trying because they love their games so much. They are not a pup that is as invested in your happiness as their own. However, their intelligence means that they understand new concepts quickly.

Try to capitalize on their enjoyment of fun and turn training into a fun daily experience. Pretty soon, they will be begging for it instead of trying to figure a way out of it.

Mini Bull Terriers are thought to be a low-maintenance dog when it comes to their grooming needs. They do shed moderately, but a couple of brushings a week solves most of the problem of loose hair around the house.

They have two annual shedding seasons in which they lose quite a bit more hair. They don’t have a double coat. Thus, it might not be noticeable if you already take the time to brush them during the rest of the year.

These dogs have a distinctive face shape that can give them a higher chance of dental disease. Curb this by brushing their teeth approximately three times a week. Check their pointed ears weekly for any debris to avoid ear infections. Trim their nails whenever necessary.

These dogs are considered relatively healthy compared to other purebred breeds. However, continue to take them to their veterinary appointments to ensure maintained health.

There is not a noticeable difference between the personalities of males and females in this breed. The males can weigh slightly more, but the two genders usually stand at about the same height.

Males weigh between 25 to 33 pounds and females between 24 to 33. Otherwise, there are no recognizable physical differences.

The Miniature Bull Terrier is a dog with a great deal of history that has crafted them into a funny, mischievous breed. If you want to be the proud owner of one of these rascals, you better have a sense of humor to match theirs.

Since they are good with families and behave well around so many other dog breeds, they fit into many different living situations with ease. Socialize them early on to achieve better behavior. They can be trained to make excellent guard dogs as well.

12 Dogs With Webbed Feet (With Pictures)