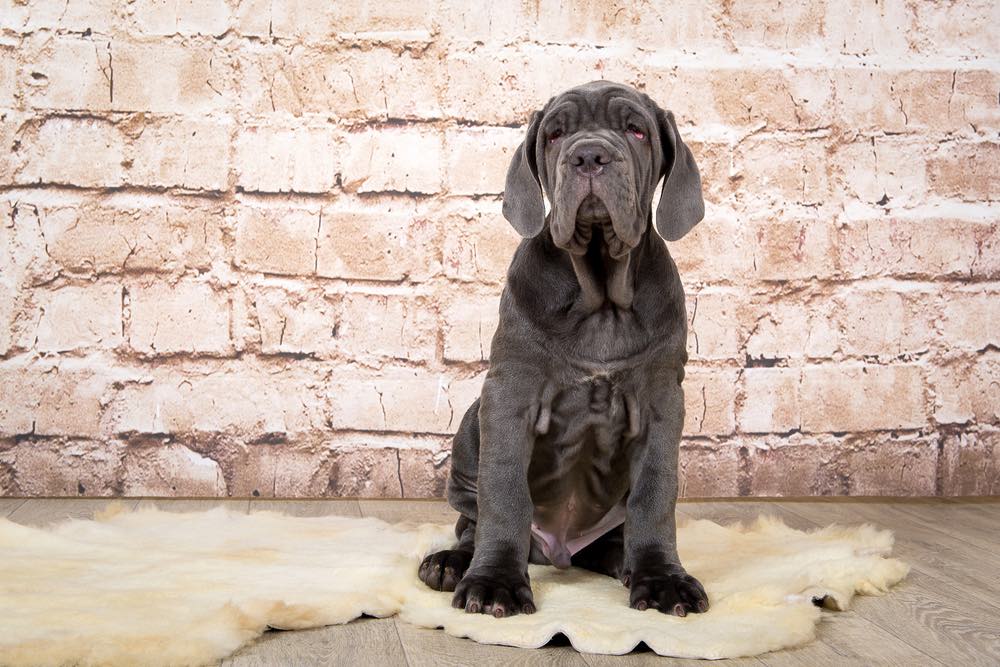 Weighing in at well over 100 pounds, the Neo Bullmastiff is a giant dog that is the result of breeding a Bullmastiff and a Neapolitan Mastiff (which is one of the largest dog breeds in the world)1. This crossbreed might possess an intimidating stature and a mighty bark, but they are gentle at heart when it comes to dealing with their family members. They do have a natural prey drive that can make them dangerous to smaller animals like cats and squirrels.

These dogs are territorial and will help ensure that no human or animal enters your property without your express permission. Surprisingly, they don’t need nearly as much exercise as most large and giant breed dogs require. They’re typically happy with a short daily walk and a little time to play in the yard every day.

A little stubborn, the Neo Bullmastiff can be challenging to train, but you can succeed if training starts young and is consistent throughout their lives. Are you wondering what it might be like to own a Neo Bullmastiff of your own? We’ve put together this comprehensive guide to provide you with all the information you need to know about this impressive crossbred dog.

Neo Bullmastiff Puppies — Before You Buy…

The Neo Bullmastiff is an interesting mixed breed that has a bright personality and a generally happy disposition. However, they aren’t all fun and games. They require love, attention, discipline, and a stable environment to live in if they’re expected to thrive. Here’s a snapshot of their major traits that should be considered when determining if you have what it takes to be a good Neo Bullmastiff parent.

The cost of adopting a Neo Bullmastiff puppy can vary significantly, depending on things such as the breeder, the parent’s lineage, and the health of the puppy. You can expect to spend anywhere from $500 to $5,000 or even more on one of these pups, which makes them a valuable investment that will require commitment and dedication from you.

To protect your hefty investment, it’s a good idea to meet the puppy’s parents and to inspect their paperwork to determine the quality of their bloodline. You should also insist that the breeder present you with a certificate of health before bringing your new puppy home, to ensure that you won’t have to deal with any health ailments any time soon.

1. They go by two different names.

The American Canine Hybrid Club recognizes this crossbreed as a Neo Bullmastiff, but the Designer Canine Registry recognizes the breed as an Italian Bullmastiff. Neither is more correct than the other, but most people in the United States won’t know what you’re referring to when calling this dog an Italian Mastiff.

The large size and happy-go-lucky personality of the Neo Bullmastiff might make these dogs seem like they’re inherently active. However, they can be downright lazy and sometimes must be coaxed to get up and head outside for exercise.

3. They can be picky eaters.

Some Neo Bullmastiffs are picky eaters and will simply refuse to eat if their food is too dry, too wet, or not tasty enough. They can do well on either dry or wet dog food but may not like a formula that is too crunchy or is filled with chopped vegetables. You may have to do some taste testing when you first bring your Neo Bullmastiff puppy home.

Temperament & Intelligence of the Neo Bullmastiff

The Neo Bullmastiff is a huge dog with a bark that’s worse than their bite. They can be territorial, which can cause problems with other dogs that try to encroach on their territory uninvited. But they’re not aggressive to dogs in general. They can be a bit wary of strange humans upon a first meeting, but it doesn’t take long for them to warm up and offer affection.

These dogs love their family members and would love nothing more than to be a lap dog if they could. They’ll spend time snuggling up on the couch next to their loved ones if they’re allowed to. While they would rather go everywhere their owner goes, they don’t mind spending time at home alone. They do have a natural prey drive, so they should never be allowed to be off a leash when in public settings, unless visiting a controlled place like the dog park.

Although they have large, strong bodies, Neo Bullmastiffs don’t need nearly as much exercise as most other large breed dogs. In fact, they can get overworked and overheated easily. Overall, these dogs are happy, loving, attentive, and protective pets that can fit into almost any family dynamic as long as that dynamic includes a house and a yard.

This crossbreed is surprisingly patient with children and loves playing with them, but their sheer size can be dangerous when they get too excited. Therefore, they should be supervised when spending time with young children to minimize the risk of accidents. Kids shouldn’t be allowed to climb on a Neo Bullmastiff because it puts extra pressure on their bones and nerves, which can cause problems as they get older. But overall, kids should enjoy their time playing with these dogs and vice versa. Adults in the household will enjoy love, affection, and loyalty.

The Neo Bullmastiff can get along with other pets in the household, but they need to be introduced while still puppies and be taught not to be territorial in common areas throughout the household. They might get along with strange dogs if they are socialized with them from a young age. Due to their natural prey drive, they may chase cats and other small pets. Introductions early may help, but not every Neo Bullmastiff will be able to reign in their prey-driven tendencies.

Things to Know When Owning a Neo Bullmastiff

There are many different topics that should be explored before deciding whether to adopt a Neo Bullmastiff puppy.

While Neo Bullmastiffs are not highly active, they need up to 4 cups of food each day to meet their nutritional needs. They should be fed twice daily to ensure that they don’t eat too much at one time, which most will happily do if you allow them to. Always choose a high-quality food that is free of animal by-products and artificial ingredients of any kind.

It’s a good idea to choose a food that has been formulated especially for large or giant breed dogs to ensure proper bone and organ growth. Foods made just for big dogs contain the right amounts of vitamins and minerals needed to support such a large frame. Whole food treats in the form of fruits and vegetables will help round out the diet of these gentle giants. Also, clean water should be provided in unlimited supply throughout the day.

The Neo Bullmastiff does enjoy a daily walk, but they shouldn’t be exercised for long periods or they may overheat or become dehydrated or exhausted. They shouldn’t head out on long hikes or run alongside a bicycler. They can handle short, brisk walks or longer strolls when it isn’t too hot outside. They enjoy a round or two of fetch in the yard, and many of them love to go on camping trips where they can hang out and take the environment in. Providing these dogs with (almost) indestructible toys like Kongs will keep them stimulated when spending time indoors.

Every dog needs obedience training to learn how to get along well in a home environment, and there is no exception for the Neo Bullmastiff. These dogs should start training lessons as soon as they come home for the first time. They can be a bit stubborn, so unless you have experience with training, you should consider working with a professional dog trainer to begin with. Before long, you’ll learn the training skills that it will take to maintain obedience throughout the life of your Neo Bullmastiff puppy.

These dogs don’t have thick or long fur, so they only need a weekly brushing or combing to keep their coat looking clean and kept. They don’t typically need baths, as they tend to clean themselves well; however, their face wrinkles should be cleaned with a damp cloth regularly to prevent food, drool, and general gunk from building up. Their nails should be trimmed once a month or so, depending on their activity level.

Unfortunately, there are a few health conditions these dogs are prone to that potential owners should be aware of ahead of time. Here’s what you need to know.

Males tend to be quite a bit bigger than females, which is the first difference between the Neo Bullmastiff genders that most people notice. Some owners say that females are more independent than boys, and some say that boys can be more easily housetrained. But no matter the breed, every Neo Bullmastiff has their unique personality and temperament, so it’s almost impossible to know how a puppy will be when they grow up based on gender observations.

These massive dogs are fun-loving, loyal, and low-key, which makes them a great family pet for those living in a house with a fenced yard for them to utilize. They need consistent training and positive reinforcement, but in return, they will provide you with affection and protection that you can count on throughout their life.

They’re relatively easy to take care of, but they are stubborn at time. Therefore, they thrive best when a loving yet firm command is taken with them. What most excites you about the Neo Bullmastiff? We’d love to hear your thoughts in our comments section below!