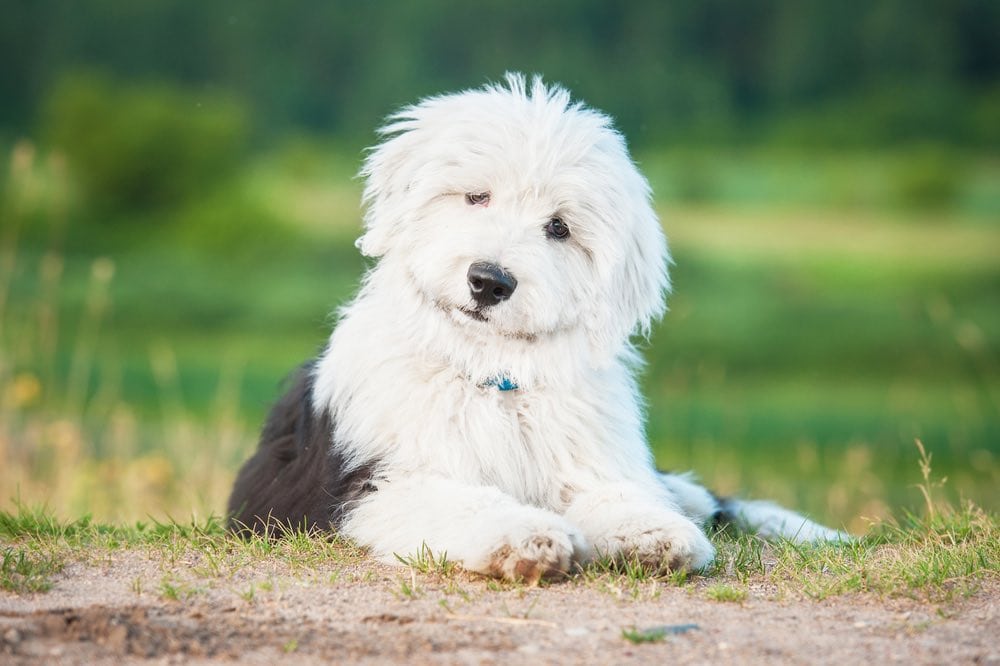 The Old English Sheepdog, or Bobtail as he is often called, is as happy-go-lucky as he looks. He is a dog that will always be a puppy at heart. Despite his size, he is a gentle pooch that is in touch with his herding background. While his coat is long, this pup doesn’t shed. As his name implies, the breed’s likely origins are from England, although his true history remains unknown.

The best way to describe the Old English Sheepdog is a gentle giant. His bear-like appearance belies the fact that he is quite friendly and adaptable for even apartment living. He is an intelligent dog, which is both good and bad, as we’ll explain later in this article. But who can’t help but fall in love with this cutie and his sweet face?

Old English Sheepdog Puppies – Before You Get One

A post shared by Theodore of House Williamstown (@tedtheoldenglishsheepdog)

Every breed has its quirks, but that’s why we love them, isn’t it? The Old English Sheepdog is one of contrasts. He is a large dog but mild-mannered and quite agile. He is intelligent, yet independent in his demeanor. This pooch has a history as a worker, herding both cattle and sheep.  However, his long coat seems a hindrance for a canine that is outdoors more than he is inside the house.

The Old English Sheepdog is vocal. It was part of his job. Unfortunately, he has one of those piercing barks that is a desirable characteristic for the breed. He also has a tendency to drool. The pooch has a moderate prey drive but is content to stay on his home turf. He isn’t nippy, but he is easily bored and may take to digging if he doesn’t have anything to do.

It’s no stretch of the imagination that a dog as cute as the Old English Sheepdog would make his way to the silver screen. His film and TV credits include Lat on The Brady Bunch, Please Don’t Eat the Daisies, 101 Dalmatians, and the Walt Disney film, The Shaggy Dog.

2. The Old English Sheepdog Has a Song Written About Him

If you’ve ever heard the Beatles’ song, “Martha My Dear,” listen closely to the lyrics. That’s Paul McCartney singing about his beloved pooch, Martha, an Old English Sheepdog.

3. The Old English Sheepdog Has Friends in High Places

Few breeds can boast of the wealth of his past owners like the Old English Sheepdog—literally! The pup first came to the United States, thanks to Pittsburgh industrialist, William Wade. It wasn’t long before this loveable pooch found his way into the households of other affluent businessmen, including the Guggenheims, Vanderbilts, and Morgans.

The Old English Sheepdog isn’t an aggressive animal and is actually stranger-friendly. That doesn’t make him the best watchdog. He’ll do best if he has a medium-size backyard with plenty of room to run when he gets the urge. He is a smart dog that needs plenty of mental stimulation to be happy. This pooch isn’t shy and will let you know he’s around you.

This breed is an excellent choice for families. He is gentle without being mean. He is good with children and may even herd them around the yard. This pooch is playful enough to keep up with the kids. He is also quite adaptable and gets used to apartment living as long as he receives his daily walk to explore his world.

As a herding dog, the Old English Sheepdog gets along with other animals. He has a moderate prey drive, which may cause him to chase the family cat occasionally. This pooch isn’t intimidated by pets that are larger than he is, either. After all, he worked with oxen and bulls back in the day. He is a dog that is aware of his size and won’t hurt smaller household members.

Things to Know When Owning an Old English Sheepdog:

Getting the lowdown about a breed is imperative for a happy dog-owner relationship, especially when dealing with a larger canine like the Old English Sheepdog. Fortunately, he isn’t a high-maintenance pet on most scores. However, there are a few things you should know before you welcome a Bobtail to your home.

The Old English Sheepdog is a food-motivated pooch, so you won’t have problems getting him to eat. On the contrary, you must watch his weight and adjust his daily intake accordingly. As a larger breed, he needs a food geared toward canines of his stature. We suggest going by your pup’s need, instead of what’s on the label.

As a herding breed, you’d probably expect the Old English Sheepdog to be a bundle of energy. Surprisingly, he is a bit more laid-back than you’d think. We mentioned his tendency to get bored. That’s where the daily walks come into play. It is the bane with an intelligent canine. Luckily, he is playful, too. That can keep him occupied and reduce his risk of weight gain.

This breed has a propensity for a health condition known as Exercise Induced Collapse (EIC). A DNA-based test is now a requirement for puppies sold by AKC breeders. The disorder occurs when the dog engages in intense play. There isn’t a cure, per se. Instead, treatment involves avoiding extreme activity.

Boredom is also a factor in training your Old English Sheepdog. You must switch up his routine occasionally to hold his interest. This pooch is intelligent and will remember what you teach him. This breed is sensitive, so keep the encouragement positive with some treats along the way. We’d suggest keeping them for training only, again, to keep tabs on his weight.

You’d think that his long coat would be a bear to deal with, but ironically, it’s not as bad as you’d think. The Old English Sheepdog is a low-shedding dog, but his hair—not fur—needs regular combing. Since it’s white, you may have to bathe him occasionally, too. Some pet owners keep their coats short with a puppy cut, which can save you some time and effort.

The Old English Sheepdog is generally a healthy breed. Most of the concerns rest with conditions that affect many larger dogs. Luckily, testing can identify problems early on to avoid heartache down the road.

Both male and female Old English Sheepdogs are equally as loving and gentle. The choice of which sex to get is a matter of preference unless you want to breed your pet. If not, we urge you to spay or neuter your puppy when they are old enough.

It’s easy to see why so many people have fallen in love with this gentle giant. The Old English Sheepdog is an affectionate companion that will make a delightful addition to your home. His intelligence makes him an eager pupil who will remember the commands and tricks you teach him. Although he may voice his opinion, he is truly a friendly pooch who will make you smile at his fun sense of humor.