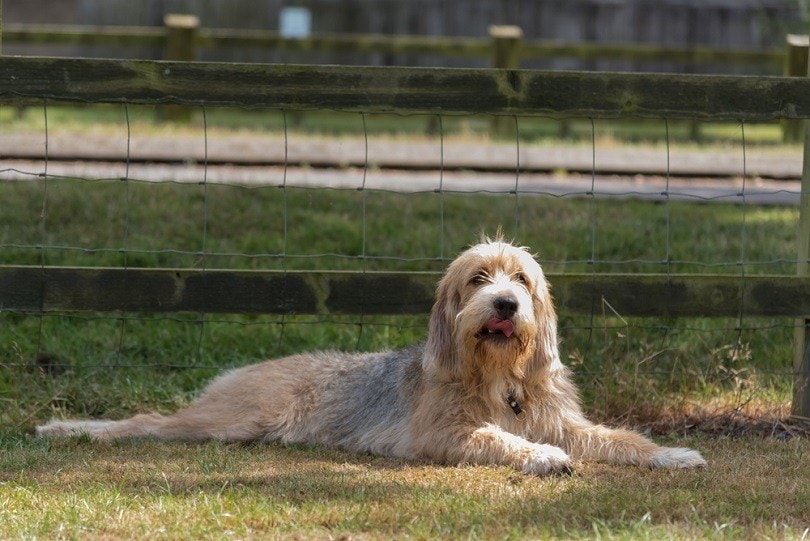 The Otterhound was bred for an activity outlawed many years ago: the sport of otter hunting. They are still bred today, albeit for other purposes, and remain an influential piece of history. They originated in England.

The Otterhound is a friendly dog. They are appealing with their long, shaggy coats of waterproof fur and excitement for life. They are made to be good swimmers with their webbed feet and coat. They love to stay in the water for hours at a time and have an excellent nose for tracking.

Otterhound Puppies — Before You Buy…

What’s the Price of Otterhound Puppies?

Since the Otterhound is very rare, their puppies are difficult to find and expensive to purchase. They typically cost between $1,500 to $3,000 in the United States. In the U.K., where there are slightly more of them since it is their country of origin, they are at least £700.

Since Otterhounds are considered an endangered dog breed, it is essential that those interested in caring for one work to maintain the bloodline. Ensure that your breeder treats the dogs well and breeds them to have a strong pedigree.

Finding and investing in one of these dogs is not as simple as it can be with other breeds. Any breeder you find is bound to have a waiting list because although they are not extremely popular, there are not many breeders.

Once you believe that you have found a breeder who can put you on their waiting list, ensure that they treat and breed their dogs correctly. Ask to see the parent pup’s papers and certificates. Take a tour around the area in which they are raised. Upholding the lineage of these dogs is a priority due to their status.

3 Little-Known Facts About the Otterhound

1. The Otterhound’s sense of smell is strong enough to sniff out if an otter has passed through the water the previous night.

The Otterhound is a breed whose origin dates to medieval ages. No one knows what breeds they descended from, although we know that they came from Devonshire and Wales.

During the 12th century, England experienced a surplus of river otters. These animals were quickly growing in number and depleting the water sources of one of the English people’s main food supplies at the time: fish.

Otterhounds were bred to be excellent swimmers and have a sense of smell that was strong enough to pick out scents in and around water. It was so developed that they could tell if an otter just passed through an area, including a river or stream, hours earlier.

These dogs hunted the river otters to near extinction on the island. Other food sources became more popular over the centuries, and the demand for fish wasn’t as high. Hunting otters became less of a necessity, so it transformed into a sport for the incredibly wealthy.

Kings and high-ranking noblemen mostly used Otterhounds for hunting their quarry. It remained popular because otters were the only animal that one could hunt during the summer months, from April to September.

2. The Otterhound is rarer than the Giant Panda.

The fact that the Otterhound was so good at their job was not something that helped them in the end. The river otter population quickly decreased. As their numbers grew lower, so did the popularity of the Otterhound.

Even with the continued popularity of the sport, the Otterhound was not widely bred. The sport was too confined to the small percentage of the upper class.

Now, there are only approximately 600 dogs of the breed left in the world. This number makes them rarer and more endangered than the Giant Panda.

3. The Otterhound is believed to be one of the foundation breeds of the Airedale Terrier.

The Airedale Terrier has taken much of the spotlight away from the shaggy-haired Otterhound. With their bright faces and gentlemanly beards, they rose in popularity while the Otterhound decreased.

The Airedale Terrier is said to be crossbred with various Terriers, as well as the Otterhound. It is the Otterhound blood that makes these dogs the largest of the Terriers, sometimes called the King of Terriers. Otterhounds also contributed a fantastic sense of smell and an affinity for swimming.

The Airedale Terrier largely took over the hunting of otters, as well as rats and other small prey in most of England. Their popularity has heavily impacted the endangerment of their ancestor, the Otterhound.

Temperament & Intelligence of the Otterhound

The Otterhound is a cheerful dog, seemingly with the desire to spread happiness to everyone around them. They are loyal and loving, always ready to make friends, whether they be human or canine.

These dogs are highly intelligent. In this case, their smarts go hand in hand with a largely independent streak. Although they will always be happy to see you, they won’t be the pup that follows you around like a shadow.

These dogs are considered high energy, although they are smart enough to know that being inside means it isn’t the time to be wild. They can swim for hours on end and will enjoy the playtime. The dogs do not mind communicating about what they see and smell, and with a loud bark, it won’t be missed.

One of the best words to describe the Otterhound is rugged. They are happy on their own, but even more so with friends and family. They appreciate having a job and are a dog made for the great outdoors.

These dogs are a good fit for active families. They have a great deal of energy and are a large breed, so keep an eye on them around very young children. Otterhounds tend to get along with people of any age and are laidback enough to withstand treatment from kids.

Otterhounds tend to get along well with other dogs. They should still be socialized from an early age, so they know how to behave around them properly. Since they have a high prey drive, they are more difficult to train around cats. They have a desire to chase them incessantly.

If you have smaller animals, like rodents, living in the home, practice extreme care. Otterhounds are intense hunters. Without a proper introduction and training, they could easily do irreversible and perhaps fatal damage.

Things to Know When Owning an Otterhound

Otterhounds are a large breed of dog with a need for plenty of activity. They can eat between 3-4 cups of food daily. Part of this depends on their age, size, and daily activities. Monitor them or ask your vet if you are unsure about how much to feed them.

The Otterhound does best on high-quality food with easily digestible proteins. Finding food that is formulated for large dogs can help target their specific dietary requirements.

These pups need daily exercise to remain healthy and in shape. They do well if they have some kind of job. They can be hunting or tracking dogs without too much training, since it is bred into their genetics.

Otterhounds are not a good breed for those who live in apartments. They do not adapt well to the small space since they prefer having space to self-exercise. Sometimes, they tend toward laziness, though, so do not expect them to do all the work themselves.

Swimming is a fantastic exercise for them. They can stay in the water and explore for hours. If you prefer walking, hiking, or running, aim for at least 7 miles each week. Regardless, they should receive 45 minutes of regular exercise each day.

Training Otterhounds can be a challenge since they are stubborn. They are also large and strong and they know it, so it is tough to get them to do something that they do not want to do.

Otterhounds can be greedy dogs. Exploit this by using food during training sessions. Be careful not to make treats more than 10% of their daily diet, though, since this can lead to obesity.

Otterhounds can also be sensitive, so do not use negative training methods or punishment. It quickly turns them away from their training sessions instead of them becoming something they can enjoy.

Grooming for an Otterhound is more maintenance than similar breeds. They have longish, shaggy coats with multiple layers. They should get brushed with a soft Bristol brush at least once a week.

The outer coat is wirier and not prone to massive tangling. The undercoat can get matted, so keeping up with it is vital. Pay close attention to the areas under their chest, their stomach, around their ears, and down their legs. You may need to trim the hair around their eyes as well.

Beyond their unruly coat, the Otterhound needs the routine care that any dog requires. Trim their nails if they are not naturally worn down. Keep their large, droopy ears free from moisture and clean out any debris, especially if they swim frequently. Brush their teeth multiple times a week to keep them free from dental issues.

Otterhounds are robust dogs that are healthier than average large-breed dogs. They can suffer from a variety of life-threatening diseases. However, if they are watched carefully, these can be avoided or treated with promising results.

Male Otterhounds are generally larger than females at around 27 inches tall and weighing around 115 pounds. Females typically top out at about 24 inches tall and only weigh an average of 80 pounds.

Otterhounds are an endangered dog that deserves more recognition. They are loving and friendly, with an independence that makes it easy to care for them. They are clever, and their antics can keep a family laughing for hours on end.

These pups make excellent companions for anyone active because they love spending time in the outdoors. Strong swimmers with a cheerful countenance, they are a breed worth bringing back into the spotlight and into a home.