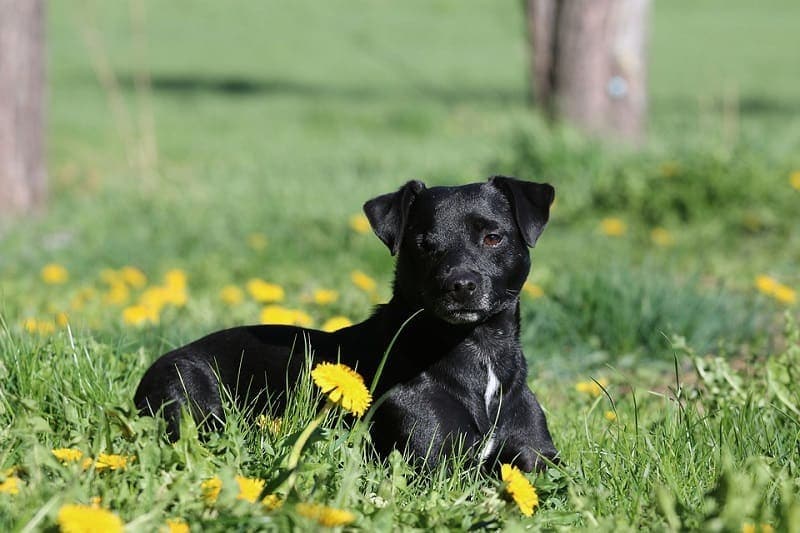 The Patterdale Terrier is a compact dog with a robust build that defies their size. They have a short coat that can be made of rough fur. They are almost always black, but other shades are possible in the genetics of the breed.

They have a large amount of energy for such a small breed and have a feisty spirit and a big personality. Patterdale Terriers are tougher than they look and are dependable. They bond strongly with family members and are prone to protecting them if they ever feel like they are in danger. That means it is essential to socialize these pups early.

Mischievous and adorable makes a dangerous combination in a pup. However, families that invest in these dogs will get an even larger investment of love and devotion in return. They are also commonly called Fell Terriers.

Patterdale Terrier Puppies — Before You Buy…

A Patterdale Terrier is a purebred pup that falls into an average category for pricing and popularity. They can cost anywhere from $300 to $1,000 in the U.S., based on their breed lines and pedigrees. The average price for these pups is $400, so not entirely out of range for most people’s budgets.

3 Little-Known Facts About the Patterdale Terrier

Patterdale Terriers originally came from England, specifically bred in the Lake District. The Lake District is a stunning area known for having a bit of a harsher climate because it is higher in elevation than some other parts of the country, while being located farther up north and close to the sea.

Due to the harsh nature of the climate that they come from, the Patterdale Terrier is well-accustomed to cold and challenging weather patterns. All this has made them into a robust breed that can stand up to most temperature changes and has a healthy immune system.

Patterdale Terriers were developed by Joe Bowman, known then as the Master of Foxhounds. He worked at perfecting breeds meant for working, especially those that could be used on fox hunts. This little dog was bred to be feisty and courageous.

Their build allows them to chase a fox right into its hole, unlike the larger build of more of the common Foxhounds. What’s more, they have a strong neck and powerful jaws that allow them to reach in and latch onto their prey.

2. These dogs were better known for their hard work ethic than their good looks.

Patterdale Terriers might currently be known as quite a cute pup, with rakish good looks befitting of a hard-working dog that has plenty of confidence. Although this makes them quite a popular pet nowadays, they never used to be a domesticated breed.

Patterdale Terriers have been used as a fox hunter and a small breed farmhand since their beginning in the 1950s. This breed isn’t that old, having been developed less than a century ago. They missed the heyday of fox and rabbit hunting in England but have been useful for more than that since then.

If you are looking for an excellent breed to try and train for agility sports or obedience training, then this dog could be perfect for you. They are ready to take on any challenge and prefer to be pushed to pursue a goal rather than sit lazily on a couch day after day.

3. Modern development as a household pet hasn’t changed their “tough as nails” attitude.

These adorable black dogs have an attitude that would better suit a gnarled sailor or suntanned farm manager. They are sweet dogs under the layers of their no-nonsense tough-guy exterior. These make this dog a good companion if you want an alert pup who will watch out for you or your children.

Although Patterdale Terriers are small dogs, they are also loyal and dedicated dogs. They are courageous and do not bat an eyelid in the face of something terrifying. That can make them a good guard dog, but it’s not great if they haven’t been socialized properly. They need to know their limits and what animals they should just leave alone.

Temperament & Intelligence of the Patterdale Terrier

The Patterdale Terrier is a feisty dog with an outgoing personality that suits the type typically associated with Terriers. They have a larger than life character, and even though they are a smaller dog, they seem to fill up a room with their energy.

Patterdale Terriers have intelligence that matches their personality. They are vivacious and need to be kept busy, so they typically act better if they can be given a job to do. They need to have plenty of room to roam around and explore their area. If they get bored, they can be quite destructive, chewing on and wrecking things with astonishing ease.

These Terriers are better as a working dog, although they can be happy as a family pet if they are active frequently and given enough brain games to keep them mentally occupied.

Since Patterdale Terriers have plenty of energy and a generally happy personality, they tend to be a child’s best friend. Their size makes them suitable for a broad range of children because they do not have that much bulk to injure a child accidentally.

This breed often does well around other dogs and might even appreciate the company to help burn off their excessive energy. They like to play games and will challenge other pups to play with them. They are not very territorial but do have protective instincts in new situations.

Patterdale Terriers do have a strong prey drive and need to be carefully socialized when introduced to smaller animals. That includes cats, rodents, and other small animals that might trigger that hunting instinct.

Things to Know When Owning a Patterdale Terrier

Even though Patterdale Terriers need plenty of activity and thus have a higher metabolism, they are also a small enough breed to keep their food requirements low. They need about 1 cup of food every day.

To keep their digestive system in good shape, Patterdale Terriers should be fed two meals a day with half of their food for each meal. Feed them a food for small to medium-sized dogs that targets the active animal. If they live more of a sedentary lifestyle, focus on the size requirement instead of the activity-specific food.

Patterdale Terriers are considered a high-energy dog and thus need plenty of activity to keep them occupied and healthy. They will quickly get bored and then destructive if left alone for too long.

These Terriers require about an hour of consistent activity every day. They are agile pups and can easily go hiking or running with you if those are everyday activities that you enjoy. You can train them to run alongside as you bike, go on walks with them, or take them to the dog park.

If you prefer to walk with them, aim for about 16 miles each week. That number will be enough to keep them happy and healthy.

Patterdale Terriers are relatively easy to train if you keep them interested in what you are working on learning. Make their training sessions into a game or an activity to keep them engaged with it.

Patterdales can easily learn what they need to, so they can excel in agility training. It will also keep them mentally occupied and thus, less destructive.

Although this breed isn’t well-suited for those who need a hypoallergenic dog, they are easy to keep well-groomed. Brush their coats a couple of times a week to keep their skin and fur in good shape and reduce any shedding. They have short, dense fur to use a pin or a slick brush on and a deshedder if they begin to lose more hair than usual.

These pups do not need baths often. Do check their ears regularly and keep them clean, along with the area around their eyes. Brush their teeth at least once a week, preferably daily to avoid tartar buildup. Check their nails as well. They should wear down naturally if they are getting as much activity as they need.

This breed is a robust and overall healthy dog. Keep their vet appointments consistent, and they should be healthy for a long time.

There are no recognizable differences between males and females in this breed.

If you are looking for a dependable Terrier with a hard work ethic and plenty of personality, then a brown Patterdale Terrier dog is probably the perfect fit for you. They are intelligent dogs that take well to all kinds of training and jobs and work well around a farm or as a hunter’s companion.

These dogs are well-suited to children and living as part of a family. Simply keep in mind that they need plenty of activity to prevent them from being destructive, but they will adapt quickly to a variety of living situations.