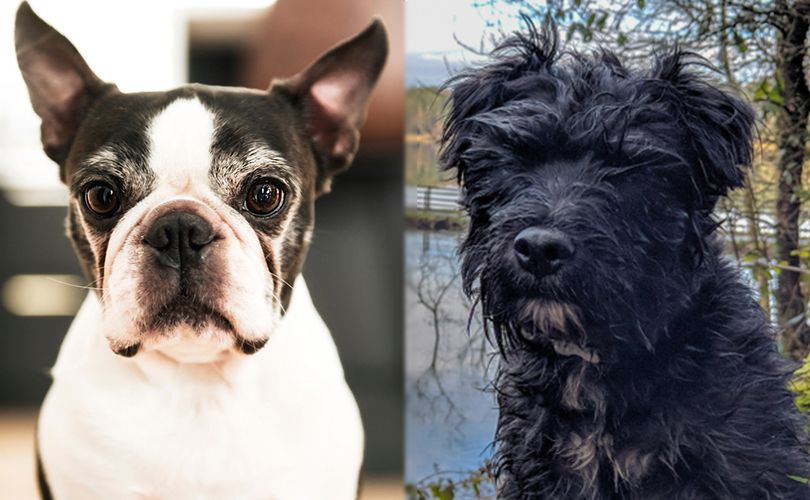 The Patton Terrier is a mixed breed pup. They are a cross between the Boston Terrier and the Patterdale Terrier. Some people think of these as smaller Labrador Retrievers because they are smaller, but their hearts that are just as big. They want to love and protect you, which makes them excellent watchdogs.

These little dogs are energetic and happy. They need plenty of personal time with the family and are quite content to follow you around all day if that is what it takes to spend time with you. They are medium- to high-energy dogs. That characteristic can mean that they are not well-suited for apartment dwellers who cannot give them adequate exercise.

Patton Terrier Puppies — Before You Get One

3 Little-Known Facts About the Patton Terrier

1. The Patton Terrier can be difficult to find because of the elusiveness of the Patterdale Terrier.

One of the parents of the Patton Terrier is the Patterdale Terrier. They were brought to the United States in 1978. Even so, these adorable Terriers come from England and have never gained much popularity outside of the country. It makes it difficult to track them down if you do not live in the U.K.

The current belief is that the dogs were originally bred in the small village of Patterdale in the Lake District of Yorkshire. Born to be a rabbit hunter, these little dogs also excel at fox hunting and other small prey. Those in America have been said to hunt anything that has fur.

These little pups can confuse some people with their appearance. They are typically brown or black with sleek, short fur. They have ears that drop from the top of their heads and keen, alert faces. Altogether, they end up looking like a Labrador in puppy form.

2. The Boston Terrier is known as the American Gentleman.

The Boston Terrier has more history and is more widely popular than the Patterdale Terrier. They are well-known for their short coats of black and white. It makes them look as though they were wearing a suit, and their dapper personality only helps augment the look.

The Boston Terrier received their name from the place they were predominantly bred: Boston, Massachusetts, in the United States. Many devotees to the breed believe that the first of their kind was born during the late 1800s, although it is not certain.

They have an interesting past. Although small with large, erect ears and a docked tail, these dogs were initially bred for fighting. They have courageous personalities that make them ready to take on almost anything. Many people in the late 1800s and early 1900s used them as ratters. That is before they became the dog of the upper class and took on a reputation better suited to a gentleman.

Although they are called the Boston Terrier, they are not considered a Terrier by the AKC.

3. These pups might be small, but they are fearless hunters at heart.

These dogs will hunt anything, calmly standing up to animals that are twice their size and more. These characteristics make them excellent watchdogs. Even though they do not appear that intimidating, they do their job well with the right training.

Temperament & Intelligence of the Patton Terrier 🧠

The Patton Terrier can have a range of predominant temperaments. Overall, they are loving, loyal, and brave. However, depending on which parent they favor and each dog’s way of expressing their personality, it can vary more than in some breeds.

These dogs can love to be around people and decide to follow you everywhere. They are typically social animals that prefer to have someone or something to engage with frequently. On the flip side, they can also be quite independent. They might express this through stubbornness and being willful or aloof.

The Patton Terrier inherits intelligence from both of their parents. This means that they work hard to figure out how to get what they want. They can be quite sensitive to human emotions as well.

These dogs are an excellent choice for families. They have quite a bit of energy and are generally quite laidback. They enjoy spending time with kids, as long as everyone knows how to properly behave around each other.

Even though Patton Terriers have more patience with young children than some other breeds, you should still keep an eye on their interactions. Both the kids and the pup will need guidance on the best way to treat the other.

The Patton Terrier is quite friendly. They enjoy spending time with people and typically do well around other dogs. Socialize them from an early age, and you are almost guaranteed to have a pup that behaves correctly around canines.

Pets that are not dogs might present more of a problem. Take more time and care when introducing them to each other. Patton Terriers have a high prey drive and can quickly mistake a situation that they are unfamiliar with and end up wreaking havoc.

Things to Know When Owning a Patton Terrier

Patton Terriers are smaller dogs that only need moderate amounts of exercise each day. Their appetite reflects this. You should only need to feed them between 1-2 cups of food daily.

Keep in mind that the Boston Terrier parent is brachycephalic, meaning they have a shorter snout. If your Patton Terrier inherits this physical feature, you need to look for food that is easier for them to eat. Find dry food with a smaller kibble size. This makes it easier for them to get it in their mouth and swallow.

Getting these dogs out for enough exercise is essential to their lifelong health. They are a medium- to a high-energy pup. However, if left indoors for long periods, they tend to become lethargic. They won’t want to go outside as much and will prefer to stay inactive.

Although these dogs can be stubborn, do not let that become an excuse. They need plenty of exercise, whether they seem to want it or not. They are usually game for exploring and like to have new places to adventure. Take them out on several walks a day or bring them to the dog park.

On average, they should receive about 45 minutes of activity every day. If you prefer to walk with them, then aim for about 7 miles throughout each week.

Patton Terriers have an ingrained desire to please the people they love. In training sessions, they can be quite stubborn. However, use their need to please and reward them with plenty of positive affirmations during the session. Doing so tells them that they are doing a good job and making you happy.

Do not use negative reinforcement with these pups. They do not respond well, and their independence will only be encouraged with this training method. If they are not responding well to your training, consider obedience classes.

Grooming the Patton Terrier does not require much maintenance. They can have two types of coats, but both are highly manageable. Their coats can be smooth or broken. A smooth coat is full of fur that is coarse, forming a dense covering. Broken coats have “guard” hairs in a way that the smooth coat does not. These protect the softer, shorter ones underneath and create a wiry upper layer.

The coat texture and color depends on which parent your pup favors more. Either way, brushing them once or twice a week should be more than enough to keep the shedding down. Use a pin brush or a wire brush to get the job done efficiently.

Beyond brushing them, clip their nails every couple of weeks. Depending on the type of activity they do, they might get worn down naturally. Check their ears for any debris collection, and wipe them out carefully to get rid of moisture and prevent infections. Brush their teeth daily or at least multiple times each week.

Overall, these dogs are a healthy breed. If they favor the appearance of the Boston Terrier, they might struggle with breathing issues. However, with the longer snout of the Patterdale Terrier, they can more effectively avoid these issues.

There are not yet any recognizable differences in the physical attributes or personalities between males and females in this breed.

A small, spunky dog that is fearless, with plenty of tolerance to boot, is almost more than one could ask for in a family pet. The Patton Terrier combines many of the most valued traits in dogs into one adorable package.

If you are looking for a family pet with enough energy to withstand your kids’ activities and have enough love to go around, consider the Patton Terrier.

For dogs that favor the brachycephalic parent, carefully monitor them during strenuous activities and especially as they age. You want to keep them happy and healthy for as long as you can.

10 Types of Hound Dog Breeds & Their Differences (with Pictures)