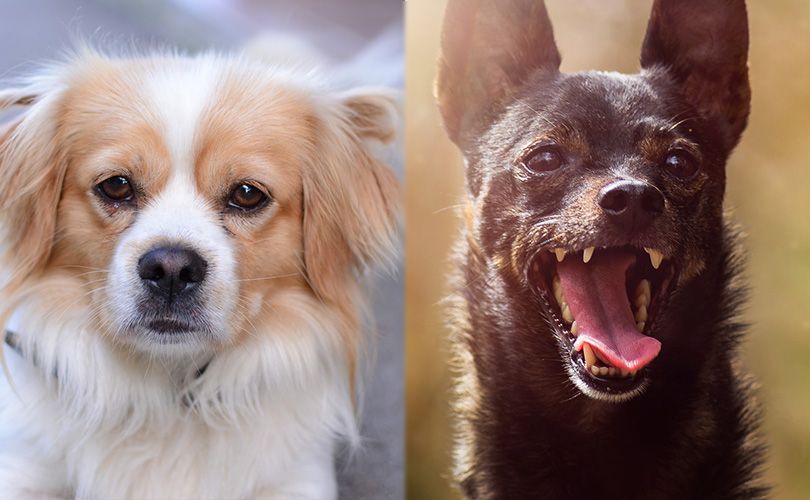 A Peke-A-Pin or Peke Pin is a mix between a purebred Pekingese and a Miniature Pinscher. They are designer dogs, explicitly bred to have the physical and temperamental characteristics from both the parents in an adorable fluffy package. Since their parents are toy breeds, these dogs are tiny but have plenty of self-assurance.

The Peke-A-Pin can also be called the Peke-A-Min. They have a strong will and are not well-suited to first-time owners because they need a firm and consistent hand during training. These little dogs are affectionate and can be possessive. They are curious and will eat anything that they find, just to see what it is like.

Min Pin Pekingese Mix Puppies — Before You Get One…

What’s the Price of Peke-A-Pin Puppies?

The price of a Peke-A-Pin puppy lies between $300 and $500. It can vary based on the pedigree of the parents and the breeder’s reputation. The price for a Pekingese typically lies between $800 and $1,000. The Miniature Pinscher tends to be close to the same price.

The Peke-A-Pin tends to be a cost-effective dog, both in their initial price and continued maintenance.

It is also important if you want to purchase a dog from a breeder to check into how they treat their animals. Any quality breeder should be willing to show you around the area where they raise their dogs and supply you with any of the papers, certifications, or vet checkups that the parent dogs have.

3 Little-Known Facts About the Peke-A-Pin

1. Pekingese were smuggled out of China to become more popular in the Western world.

The Pekingese is one parent breed of the Peke-A-Pin. They are a fluffy dog with a flat forehead and a big personality. These dogs were companions to those in the Chinese Imperial Palace for many years. Like many of the dogs from Asia, these are among the oldest lines of dogs that are still around today.

The Pekingese is believed to have come from the city that is now called Beijing, but it was previously known as Peking and the dogs inherited this name. They were closely guarded as dogs of the royals and were not allowed to be widely bred in most of the rest of the country.

After thousands of years of carefully guarding this line of dogs, the English arrived on Chinese soil. Years later, the Opium War in 1860 began, and Pekingese became one of the many spoils of war to be carted over to England. Not many made it back to the West, but there were enough to gift to Queen Victoria.

Their popularity only truly began to grow in England during the 1890s. Smugglers began sneaking them out of China and transporting them to England for hefty fees. These dogs are sometimes called Lion Dogs because they resemble the lion statues commonly placed outside of Chinese temples and palaces.

Not only does the Peke-A-Pin have a bit of lion in their lineage, but their other parental half is also known as “the King of the Toys.” The Miniature Pinschers are strong, fierce little dogs that have no fear.

They appear to be miniature versions of the Doberman Pinscher, and although these dogs play a part in their ancestry, they have been distinct breeds for many years. Other dog breeds involved in the creation of the Min Pin were Italian Greyhounds and Dachshunds.

The Miniature Pinscher does come from Germany, having been raised to be agile ratters that could fit almost anywhere.

The Miniature Pinschers used to be called the Reh Pinscher. Reh is a kind of small deer that lives in the dense German forests. The similar appearance between deer and dog gave the latter the moniker.

3. The Peke-A-Pin is a little dog with a ton of determination and character.

Combined with the strong genetic makeup coming from a purebred Chinese royal and a tough German ratter, Peke-A-Pin has a strong personality. Even though they are small, their sheer amount of will and determination to only do what they want makes them a poor choice for first-time dog owners.

Temperament & Intelligence of the Peke-A-Pin

The Peke-A-Pin is a fearless dog with a strong affectionate side. They are well-suited to being the only dog of the house because they do not appreciate having to share their humans. They need to be handled gently but trained with a firm hand.

These little dogs are quite smart, and their curiosity will often get the better of them. They are filled to the brim with a sense of self-importance and do not easily understand that there are boundaries for them.

These pups can be excellent as watchdogs because they love to be vocal and are protective of their people. They do not tend to get along well with strangers and need to be socialized from an early age to relate to other people properly.

Peke-A-Pin can suffer from separation anxiety if left alone for too long. They need to be loved by someone who works from home or has family in and out of the house consistently.

Are Peke-A-Pins Good for Families?

The Peke-A-Pin is a good choice for families with older children. They do not cope well with how smaller children may roughly handle them, and their patience will run out quickly. Otherwise, they love to be loved and need plenty of time and human contact. Having them in a family with more people is one way of satisfying that need.

Do Peke-A-Pin Get Along with Other Pets?

The Peke-A-Pin does not get along well with other pets. These dogs will always prefer to be the “dog of the house.” They do not like cats much either. If you have another animal or would like to get another animal, you will need to have a great deal of patience while socializing your Peke-A-Pin.

Things to Know When Owning a Peke-A-Pin

The Peke-A-Pin is a small dog that doesn’t need much exercise. They do not have large diets and should only need approximately 1 cup of food each day. Vary this slightly if your vet recommends it or if they have a more active lifestyle than many dogs of this variety.

It is still a good idea to spread out their mealtimes, even though 1 cup of food is not much. A meal in the morning and one in the evening helps keep their digestive system more balanced. Try to feed them a diet without many fillers, since they are so small. Having high-quality food will mean that each meal goes further for them.

These pups do not need much exercise each day. It is this that makes them an excellent choice for a senior who has plenty of time to spend with them. The Peke-A-Pin should get about 25 minutes of activity each day. If you are walking them, then aim to reach 8 miles each week.

Training the Peke-A-Pin can be a challenge because of their stubbornness. They need a firm hand and should have a trainer that is accustomed to the attitude of small dogs. Their training sessions need to be consistent, or they will get frustrated with the methods and begin to ignore you.

Try to figure out what motivates your Peke-A-Pin, such as a certain treat. Tempting them into learning activities can keep them more engaged and curious about what is going on.

The Peke-A-Pin is fairly easy to keep groomed, depending on which parent they favor. If they are more like the Pekingese, with longer, fluffy coats, they will need more attention. However, they typically favor the short coats of the Min Pins and might only have longer hair around their ears that needs attention.

Brush them several times a week, no matter what kind of coat they have. It gets them used to more physical contact and serves as bonding time between you and your pup.

Beyond the typical grooming, check their ears for any debris or moisture, and gently clean them out with a soft cloth. It is also suggested to brush their teeth daily or at least once a week, to avoid dental issues. Their nails should be checked and clipped approximately once a month because they will generally not receive enough activity to keep them shorter naturally.

The Peke-A-Pin can inherit many of the health problems that their parents suffer from, especially as such a small dog. Keep up to date with your veterinary visits so any issues can be diagnosed as soon as possible.

There are no recognizable differences between males and females of this breed.

Although these little dogs can be a handful, they also promise to fill your life with enough love to make up for it. They have a dominant personality and are well-suited to homes where someone is around most of the time. They need plenty of one-on-one time with their favorite humans, a little bit of exercise, and enough patience to get them through quality training sessions.

If this sounds like something that you can do, then these dogs would make the perfect companion for you. If not, perhaps a more laidback pup would be better.