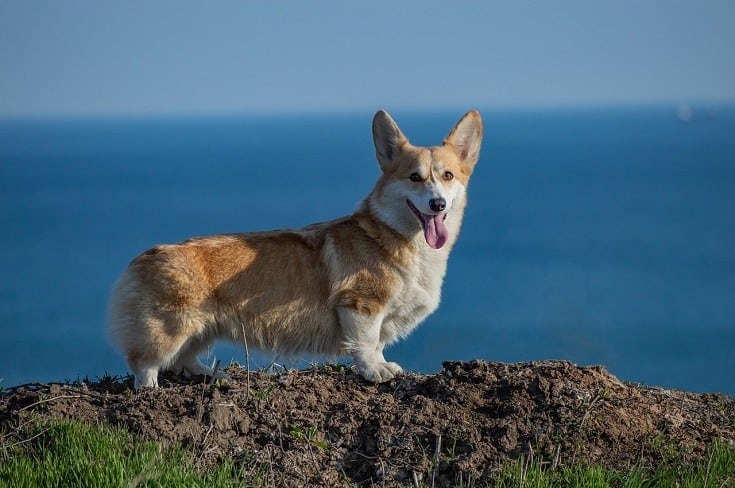 The Pembroke Welsh Corgi is a lesson in contrasts. He is small yet carries himself as if he were two or three times his size. He is adorable, yet he is something of a spitfire with his willfulness. He is smart and requires mental stimulation to keep him from getting bored. However, he makes up for all of these challenges with his undying loyalty, love, and affection.

The breed has a long history that goes back over 1,000 years. He has a rural connection that reflects his farming background, although his precise origins are unknown. He is a true working dog that takes his job of herding seriously. This pup took on several roles from herding to watching over his owner’s home. That’s part of what makes the Pembroke Welsh Corgi an independent dog.

Many have fallen under the charm of the Pembroke Welsh Corgi, which accounts for the breed’s popularity—and price. He has even Queen Elizabeth II of England under his spell. He is sometimes assertive, yet this pooch isn’t aggressive, nor is he shy. There’s a lot to learn about this lovable dog to see if he is the right pet for your family.

Pembroke Welsh Corgi Puppies – Before You Get One…

Don’t let the small size of the Pembroke Welsh Corgi fool you. He is a lively pooch that will always make life interesting in your home. He’s a smart dog that is easy to train, albeit with an independent streak that adds a challenge to the mix. He may require more attention to keep him focused, but he is still a suitable choice for novice pet owners.

The combination of independence and intelligence means that you must be a dedicated pet owner. We’d say the same for most dogs, but especially for the Pembroke Welsh Corgi. Think about it. Here is a dog that is less than 2 feet high that runs with cattle! Enough said. This breed was a hunter, so his prey drive isn’t high. He might chase the occasional squirrel, but most canines would, too.

However, the Pembroke Welsh Corgi is vocal, which isn’t surprising given the animals he is herding. He has to make his presence known when dealing with cows. There is also his background, living in an isolated area with a low population density. That gave him few chances to interact with other people and dogs. Thus, the issues that potential owners must deal with when owning a Corgi.

The numbers of Pembroke Welsh Corgis in the United Kingdom dropped so low that they were listed as an At-Risk breed in 2014. Fortunately, they rebounded and have enjoyed increasing popularity here and across the pond.

2. The Pembroke Welsh Corgi has an enchanted history.

Every breed has their story, sometimes peppered with myths and legends. The Pembroke Welsh Corgi is no exception. His history includes tales of elves and fairies from his native country, Wales. It’s said he once rode with ancient warriors, a nod to his possible ties with Vikings.

3. The Breed has a close history with the Cardigan Welsh Corgi.

You might recognize the name of another related breed, the Cardigan Welsh Corgi. The two were considered as one because of interbreeding. Today, they are separate breeds. How do you tell them apart? The Pembroke has pointy ears and a docked tail. The Cardigan, on the other hand, has rounded ones and a longer tail.

Many dogs are a product of their history, whether it’s selective breeding or the job they do. A bit of both has been at work with the Pembroke Welsh Corgi. The reason that this breed and others like him have short legs is because of a genetic mutation. It turns out that his short stature suited his travel over the rugged terrain of his homeland. He may not be tall, but he’s miles high in personality.

The intelligence of the Pembroke Welsh Corgi is one of the many hallmarks of this dog. Noted psychologist, Dr. Stanley Coren, ranked this pooch as number 11 on the scale of most intelligent canines. That explains why this pup competes both in the show ring and on the agility circuit. It also means that you need to start training early to keep him from picking up any bad habits.

The Pembroke Welsh Corgi makes it easy to love him because he’s such a delightful pet. He is outgoing and affectionate, even with strangers. He’ll also get along famously with the kids. Because of his small size, we’d suggest teaching your children to play nice with him, although Corgis are quite muscular and able to take care of themselves.

This pooch is very playful with the high-energy level to keep up with the action for plenty of games of catch. That’s a good thing, too, since this smart dog needs a lot of mental stimulation to stay happy. He is, after all, a working dog that wants a job to do.

The Pembroke Welsh Corgi is relatively dog-friendly, which isn’t surprising given his background. However, it’s a better description to say that he is lukewarm about other canines. That’s because of his independent nature. He calls his own shots. It’s also what makes early socialization imperative. We recommend starting to introduce your pup to other dogs—and people—as soon as you can.

Things to Know When Owning a Pembroke Welsh Corgi:

Every breed has its peculiarities. The size of the Pembroke Welsh Corgi is the obvious one. It’s going to affect how you feed your pooch, exercise him, and maintain his good health. While he’s relatively adaptable, he doesn’t tolerate being alone for long stretches. He is an affectionate dog that needs attention.

You should keep a Pembroke Welsh Corgi in a fenced-in yard. He has a moderate wanderlust potential. Also, these pups are often vocal, a throwback to his cattle-herding days. It’s best to nip this bad habit early in the bud because this pooch has a big voice when he has something to say.

Your Pembroke Welsh Corgi will do best with a food formulated for medium-sized dogs. Feed puppies two to three small meals a day. These pups mature relatively quickly. A diet for a pooch of his size will provide the right number of calories and nutrients to support his growth pattern. You can scale back to two times daily once he is an adult.

The main concern for Pembroke Welsh Corgis—or any pet—is obesity, particularly with a pup like this one. Excess weight will put extra strain on his long back and could increase his risk of chronic health conditions, such as diabetes. We recommend viewing the feeding instructions on the label as a suggestion only.

Let his body condition help you decide how much to feed him. If you look down at your pet, you should see a defined waist toward his hindquarters. You should be able to feel his ribs easily. That is a pet at an ideal weight. If not, then you discuss a better diet plan with your veterinarian. Remember that it is significantly simpler to prevent a problem than trying to correct it.

Pay attention to your pup’s weight, especially after neutering or spaying your pet. Because of hormonal changes, your pooch may gain a few extra pounds. Without the prospect of having puppies, your female Pembroke doesn’t need the additional nutritional support, which makes sense. Monitor your dog’s weight carefully in the months after the surgery and adjust their intake accordingly.

The combination of a good diet and regular exercise is an excellent way to keep your pooch healthy. Luckily, the Pembroke Welsh Corgi is an active breed that will make the latter a breeze. He is also a playful pooch, which can also help keep the pounds in check. A daily walk around the neighborhood is also a smart idea to keep him mentally healthy.

We suggest making it a habit. The intelligence of the Pembroke Welsh Corgi will help him remember; in case you forget.

One of the reasons for the popularity of the Pembroke Welsh Corgi is the ease of training this outgoing pooch. He will readily pick up new tricks and commands. There are two caveats that you must bear in mind. First, this pup is sensitive. He is so eager to please that he’ll get quite unset by stern reprimands. Therefore, we recommend only positive reinforcement and praise.

Second, keep the treats as a training aid only, and make sure the kids know it, too. Otherwise, the adorable face of the Pembroke Welsh Corgi will make you a sucker every time he begs for one. That’ll make it easier to stick to the recommended 10% rule. You may also find that he’ll respond better to your commands with something to enjoy in return.

The Pembroke Welsh Corgi regularly sheds so much that you may wonder how a little can have so much hair. Weekly or even daily brushing sessions are a must-do. It’s also an excellent way to bond with your pooch. Giving him lots of attention as you groom him will make it even easier—for both of you! We also suggest checking his ears regularly for signs of an infection or mites.

You should also trim his nails occasionally. Brushing his teeth every day is an effective way to keep his gums healthy. If you start him as a puppy, you won’t have any issues when your pup gets older. Using a flavored toothpaste will make it easy-peasy.

The Pembroke Welsh Corgi is a healthy dog for the most part. The main issues are joint or skeletal in nature. We strongly urge you to buy only from breeders who do the recommended screenings. Some involve imaging to assess the condition. Others are DNA tests to identify at-risk dogs. However, these exams are not a 100% guarantee, but they can offer you some peace of mind.

Both male and female Pembrokes are delightful pets and will make a welcome addition to your home. Interestingly, the Orthopedic Foundation for Animals breed health survey shows an even split between the sexes with pet owners. If you’re not going to breed your dog, we strongly urge you to discuss spaying or neutering with your veterinarian. Follow their advice about the appropriate timing.

Few dogs have a fascinating history and royal connection as the Pembroke Welsh Corgi. With his sweet face and adorable brown eyes, it’s hard not to fall in love. But it’s his boundless affection and happy-go-lucky personality that make this pup so endearing. His intelligence is the icing on the cake, especially if you have the time to teach him new things.

Like many smaller dogs, the Pembroke Welsh Corgi makes up for what he lacks in size with a playful and loving nature that we’d be hard-pressed to say why we won’t invite him into our home. Once you meet this smart and lively pooch, we’re sure you’ll agree. This pup is a keeper.