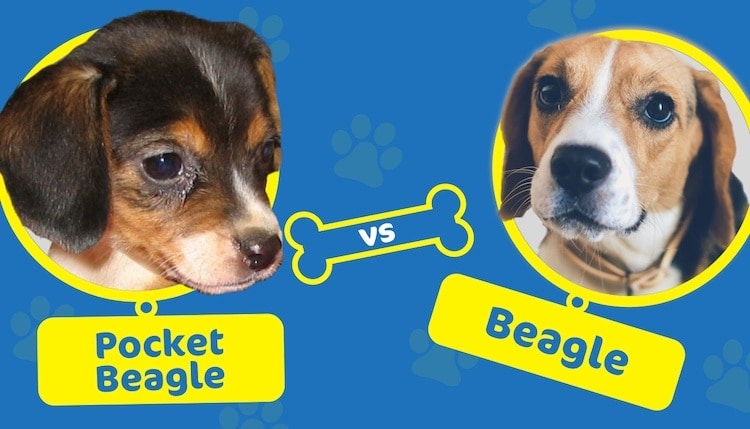 Beagles currently rank in sixth place for the most popular dog breed. Similarly, miniaturized dog breeds have recently taken off in demand. When you combine a fondness for Beagles with a fascination for miniatures, you get the Pocket Beagle.

Besides understanding that Pocket Beagles are a smaller version of standard Beagles, you may not know what else sets these mini dogs apart from their larger counterparts.

We’ll start by going over how big a full-grown Pocket Beagle compares to a standard Beagle. Then, we’ll compare the Beagle’s history, characteristics, and temperaments with the Pocket Beagle. Finally, we’ll explain how breeders created the Pocket Beagle and how their decreased size impacts their health and appearance.

The Pocket Beagle and the Beagle are incredibly similar, but they do have their set of unique characteristics. We’ve broken it down a little more simply here for you.

If you’re like most dog lovers, your first question may be about the size difference between a Pocket Beagle and a Beagle. The easy answer is that Pocket Beagles tend to be at least half the height and weight of standard Beagles.

How Big Do Pocket Beagles Get?

Pocket Beagles grow to a shoulder height of between 7 and 12 inches. They weigh between 7 to 15 pounds.

The American Kennel Club recognizes two classes of Beagles for show. Beagles in the 15-inch class have a shoulder height of between 13 and 15 inches and generally weigh between 20 and 25 pounds.  In the 13-inch class, Beagles have a height of 13 inches or lower and a weight range of 15 to 18 pounds.

Pocket Beagles, for the most part, are smaller versions of Beagles. Before we deeply compare their differences, it’s helpful to learn about their shared Beagle dog breed and their combined history. Pocket Beagles display much of the same characteristics, appearance, and temperament as Beagles.

Beagles know how to charm their owners with their big brown or hazel eyes. Adding to their cuteness are long hound ears that are set low on their broad heads. Beagles have square-shaped, medium-sized muzzles and come in appealing colors of lemon, red and white, and tricolor. Beagles have a double coat that requires minimal maintenance. Regular brushing should keep up with excess hair and shedding, which peaks once a year in the spring.

Bred as hunting dogs, the Beagle is the smallest breed of hound dog originating in England. In fact, the name Beagle is thought to be derived from the Gaelic word “beag,” meaning little, or the Old English word “begle,” meaning small. The Beagle gained their popularity in the Middle Ages for their superb ability to hunt rabbits and hare. Hunters especially liked that they could keep up with Beagles on foot as opposed to having to be on horseback with the larger hound breeds.

The hunting dog history of the Beagle explains much about the Beagle’s personality today. Beagles often have their noses to the ground and are ready to give chase, often disregarding fence lines.

As a hunting dog, Beagles worked in packs. As a pet, your family becomes your Beagle’s pack, resulting in a wonderfully loyal, loving, and lovable companion. However, be aware that separation anxiety, and the negative behaviors associated with it, is common among Beagles of all sizes.

Beagles make wonderful family dogs. This active, curious dog breed seeks plenty of playtime. They often let their voices be heard through barking and howling. Beagles are relatively easy to train despite a streak of stubbornness due to their higher intelligence.

How Are Pocket Beagles Different than Beagles?

Pocket Beagles certainly seem to be pint-sized versions of the standard Beagle. While there are many similarities, there are also a few important differences related to their smaller size.

During the time that the standard Beagle was growing in popularity, a pack of 6-9-inch Beagles emerged as treasured pets to Queen Elizabeth I, who called them “singing Beagles” for their high-pitched baying. These tiny Beagles accompanied hunters in their saddlebags, thus earning the name Pocket Beagles. On the hunt, once the larger hounds flushed out the prey, the Pocket Beagles would navigate the underbrush in further pursuit.

How Breeders Made a Pocket-Sized Pup

By 1901, the original pack of Pocket Beagles no longer existed, and their genetic lines were lost. A century later, as the interest in miniaturized versions of certain dog breeds gained a renewed interest, breeders began to look at ways to reduce the size of the modern Beagle.

There are two ways that breeders have achieved this smaller Beagle. First, breeders may crossbreed with another smaller dog breed. This method, at least, allows for genetic diversity. The second method is more controversial due to negative health impacts. The parents are each the runt of their own litters. Although that ensures the possibility that the dwarfism gene may be passed onto the next generation, runts have genetic defects and a higher rate of sickness, which also becomes passed forward to their puppies.

While the difference between Pocket Beagles and Beagles may be small in size, it may be big in importance if you’re deciding which version of Beagle to adopt. While Beagles are a small dog breed with large personalities, Pocket Beagles have a similar personality, only in an adorable mini package. If you’re planning to own a Pocket Beagle, be aware of their health concerns and controversial breeding practices, and be mindful that miniaturized dog breeds aren’t ideal for younger children who may not be gentle.