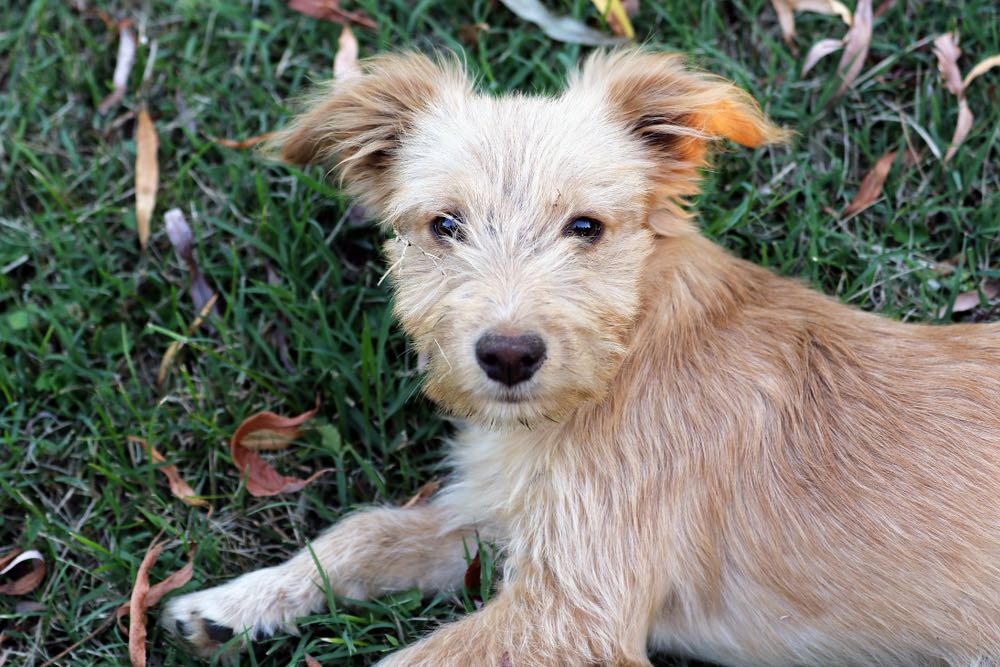 The Poo-Shi, or Shiba Poo, is a designer dog breed that is a result of crossing a purebred Poodle with a purebred Shiba Inu. It is not known exactly when this breed was first developed; however, it is thought to have been some time in the late 1980s or early 1990s.

Both the Poodle and the Shiba Inu are small to medium-sized dogs, are highly intelligent, and were first bred as hunting dogs, but apart from this, the breeds have little in common. The Poodle is considered to be the national dog of France (despite originating in Germany), and the Shiba Inu is originally from Japan.

In looks, the Poo-Shi can take after either parent breed: the Poodle is known for their dense, curly hair, puffy tail, and floppy ears, whereas the Shiba Inu, which is part of the spitz family, has a short-medium coat, a foxlike face with pointy ears, and a large curled-up tail.

In personality, the Shiba Inu Poodle Mix has inherited many of their parent breeds’ best traits, making them an affectionate, loyal, and intelligent family pet.

Poo Shi Puppies — Before You Buy…

Many people are attracted to designer breeds developed with Poodles because they are low-shedding dogs and considered to be hypoallergenic. Unfortunately, this is not something that always carries across to the Poo-Shi.

Shiba Poos that take after their Poodle parent in looks are likely to shed far less than those that look more like the Shiba Inu. If you suffer from dog allergies, it is something to consider when choosing a Poo-Shi puppy.

In terms of housing requirements, the Poo-Shi can adapt to apartment living. However, they are moderately active dogs that require daily exercise, and as such, they would likely be happier in a house with a fenced-in yard in which they can run around and play.

What’s the Price of Poo-Shi Puppies?

Poo-Shi puppies are usually quite reasonably priced, and you should expect to pay between $300 and $600 for a new puppy.

Being a designer breed, the America Kennel Club does not recognize the Poo-Shi. As a result, they don’t maintain a list of registered breeders that you can rely upon when choosing a Poo-Shi puppy. It is therefore important that you do your homework to ensure that you are purchasing from a reputable Shiba Poo breeder. Where possible, you should obtain recommendations from people you know and trust, or you may wish to join a Poo-Shi group on social media and speak with other owners to get their advice.

Of course, obtaining a breeder recommendation is only the starting point. You should also ensure that you meet the recommended breeder and their dogs, visit their kennel, and review the health certificates of the puppy’s parents.

3 Little-Known Facts About the Poo-Shi

1. The Poo-Shi breed is lucky to exist.

The Shiba Inu, the Poo-Shi’s Japanese parent breed, almost became extinct during World War II due to a combination of food shortages and the onset of a canine distemper epidemic. At the time, the breed was reduced to just three surviving bloodlines, from which all modern Shiba Inus and Poo-Shis have descended.

Perhaps unsurprisingly, the first Shiba Inu imported to the U.S. was brought into the country by a military serviceman and his family returning from Japan in 1954.

Taking after their Shiba Inu parent, Poo-Shis are quite clean dogs, but they’re not fond of taking baths, with many disliking being wet at all. To ensure this doesn’t develop into a problem, you should start getting a Poo-Shi puppy used to water from a young age.

3. Some Poo-Shis have a bit of a sassy attitude.

This is another personality trait that the Poo-Shi sometimes inherits from their Shiba Inu parent.

If your Poo-Shi dog is inclined to give you a bit of attitude, they will deliberately ignore you and any instructions you give until they are ready to listen. If caught and addressed early, this trait can be overcome with training, but if a dog learns as a puppy that you’ll let them get away with this sort of behavior, it will be difficult to change when they get older.

Temperament & Intelligence of the Poo-Shi

Take the intelligence of a Poodle and add it to the confidence of a Shiba Inu, and you have a foundation for what sounds like the perfect dog, and for the most part, the Poo-Shi lives up to that promise.

These intelligent dogs are affectionate and loyal and not at all timid. They tend to bond closely with their family members but are wary of strangers and make great guard dogs that will stand their ground and alert you to any danger.

As discussed above, the Poo-Shi can have a bit of a stubborn streak, but this is not always an issue, and with a little patience, they are generally quite easy to train.

Friendly and playful, these happy designer dogs tend to have a moderate amount of energy. The Shiba Inu Poodle Mix will enjoy a nice long walk or a romp around the park, and at the end of the day, they’ll happily curl up on the sofa beside you for a snooze.

Yes, the Poo-Shi is a great family dog. They are excellent around children and crave attention, preferring to be with people than spend time alone.

As with most dogs, it is a good idea to keep an eye on them around toddlers, but Poo-Shi is more likely to walk away from a child who becomes too rough or annoying than to get aggressive or snappy.

Having been bred from two hunting dogs, the Poo-Shi has a significant prey drive. This trait results in them having a desire to chase small animals, which is something that may become problematic if you introduce a small new pet into your household.

Poo-Shis will generally get on well with other dogs, and if raised with a cat, you aren’t likely to have any issues with them at least being civil toward your feline friend. You should be aware, though, that a Poo-Shi can be a little possessive and may not like sharing your attention. So, if they are left alone for long periods or feel ignored, they may start to act out with destructive behavior.

Things to Know When Owning a Poo-Shi

The Poo-Shi is a relatively easy dog to own and look after. They are suitable for both first-time and experienced dog owners, and provided that you give them time and attention, you’re unlikely to have any major issues.

As with all dogs, they will benefit from early training and socialization, so you will have a loyal friend for life.

Being a small to medium-sized dog, the Shiba Inu Poodle Mix does best when fed a premium quality dry dog food that has been formulated for their size and activity level. Ideally, you want to ensure that the food you select provides a range of nutrients, including meat, grain, and vegetable ingredients, and is high in protein and dietary fiber. A product such as could be a perfect choice.

The Poo-Shi is a moderately active dog and requires at least 45 minutes of exercise daily. This may take the form of a long walk, a visit to your local dog park, or even a good run around in the yard with the kids.

If kept inside without the exercise and mental stimulation they need, a Poo-Shi may start to become destructive, so their daily exercise is not something that you should overlook.

Being quite an intelligent dog, the Poo-Shi is relatively easy to train. They tend to respond well to positive reinforcement and encouragement, so it is always best to praise them when they get things right and ignore their failures rather than scold them.

Some Poo-Shis can be a little stubborn or sassy. If this is the case, you may find training your dog to be a bit more challenging.

As with other dog breeds, the key to successfully training and socializing you Poo-Shi is to start while they are young.

When it comes to grooming, you’ll find that your Poo-Shi is quite easy to look after. A quick brush once or twice a week will usually be all that is required to keep their coat looking its best; however, if your dog has a coat more like a Poodle than a Shiba Inu, you may wish to have it clipped by a professional dog groomer every few months.

Thankfully, Poo-Shis don’t need to be bathed often, as many of them don’t like taking a bath or getting wet.

Your Poo-Shi will also benefit from having their nails clipped and their teeth brushed regularly with canine toothpaste.

Poo-Shis are generally healthy dogs that don’t suffer from too many major health problems or complications. Provided that they are well cared for and receive their regular vaccinations and worming treatments, they should live a happy and healthy life into their old age.

Of course, there are still a few conditions to which the Poo-Shi is susceptible. However, many of these can be largely prevented or avoided with careful breeding and puppy selection.

As with most dogs, you will find that Male Poo-Shis tend to be a little taller and heavier than females. However, apart from that, there is little difference between the sexes, particularly in dogs that have been neutered or spayed.

Whole female Poo-Shi dogs can be a little more territorial and possessive when they are in heat, and whole males may be more inclined to try and escape and wander than females. However, these problematic traits can largely be eliminated by spaying or neutering your dog before they reach sexual maturity.

Rather than picking a puppy based on its sex, we recommend speaking to your Shiba Inu Poodle Mix breeder who should know the most curious, active, or quiet puppies in the litter.

As a breed, the Poo-Shi is increasing in popularity across the country. They are excellent family pets with great personalities. They’re also loyal and friendly and can adapt well to apartment living or a family house with a yard. As they’re easy to look after and train, they could be a good choice for a first-time dog owner.

However, as with all dogs, you need to remember that a Poo-Shi will be a pet for life. Your new puppy will be an important part of your family for at least the next 10 years and will rely on you for their care and wellbeing every day.