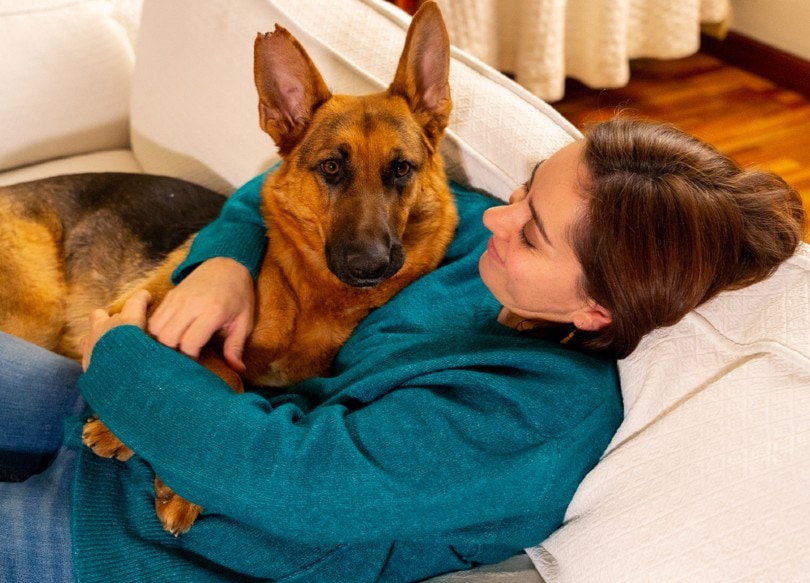 German Shepherds are wonderful dogs that are extremely intelligent, loyal, and affectionate, but they also have their fair share of strange behaviors, as any owner can tell you. One of the things we get asked about frequently is why the German Shepherd sits on you. If you have experienced this behavior with your pet and would like to understand it better and possibly stop it, keep reading while we look at several reasons why it might be behaving this way and what you can do about it.

Why Does My German Shepherd Sit On Me? (10 Reasons)

One of the most common explanations for why your German Shepherd is sitting on you is that it is marking its territory. Your dog may be attempting to rub its pheromones on you in an attempt to claim ownership in the dog kingdom. Humans can’t smell these pheromones, but they are an important way that dogs and other animals communicate. Animals can spread pheromones in different ways, including rubbing their face and body on an object or urinating on it.

2. It May Be Instinctive

Another thing that many experts will point out is that a large number of German Shepherd owners have this problem of being sat on, which leads many to believe that it’s part of their genetics like many of their other traits. This would explain a lot since many of us can’t understand where our pets got the idea in the first place.

Many people get a dog like a German Shepherd because of the amazing protection it offers. However, those of us who have had one for a while know that they can also be big babies, especially around the 4th of July. Another thing you might not realize is that your dog considers you the alpha and will therefore come running to you for protection when it’s afraid. It’s not uncommon for these dogs to hop on your lap and bury their head in your armpit when the fireworks or thunder start.

Similar to the way it will come to you when it’s afraid, it’s also likely to come to you when it is stressed out. If something is bothering your German Shepherd and it can’t figure out how to tell you, it may resort to sitting on you as a way to get you to help it work on the problem. We’ve seen this most frequently when there is a new arrival to the family.

There is a great chance that your dog is sitting on you because it likes you and wants to be near you. Many dog breeds like to sit on their owner’s lap, and your German Shepherd is doing the same but doesn’t realize how big it is. This behavior occurs most frequently when the family sits down on the couch to watch a movie, and the dog doesn’t want to be left out.

If your dog feels like it is not getting enough attention, it’s not uncommon for it to sit on you in an attempt to get you up to go for a walk. Cats often do this when you are sleeping, but the German Shepherd will do it when you are watching television and even when you are at the kitchen table if the dog can squeeze in. Once you stand up, it will quickly run to the door or grab a toy it wants you to play with together.

As long-time owners of the German Shepherd breed, we’ve long thought one of the biggest breed contradictions is the fact that this double-coated dog who loves the snow becomes cold and wants to snuggle inside the warm house. There is no question it sits on us more frequently in the wintertime, leading us to believe it’s trying to snuggle for warmth.

If you have gone to a friend’s house and found that their German Shepherd continuously climbs on you while you were talking with your friends, there is a good chance you were sitting in the dog’s spot. We’ve found that it will usually give you a good stare down first to get your attention and communicate that it wants something from you. If you remain seated in its spot after several minutes, it might begin to put a paw on you, and if it knows you well, it will often relent and choose to sit or lay on you instead.

If you have been gone a day or more, your German Shepherd can develop separation anxiety and become overly emotional when you return home, often showering you with kisses and attempting to sit on you. This behavior can last for several minutes, during which it won’t be easy to convince the dog to settle down.

No one likes to hear that something is their fault, but as pet owners, we’re all guilty of letting our puppies get away with things we shouldn’t. If you allowed or encouraged your German Shepherd to sit on your lap as a puppy, you can expect it to do the same as an adult, and this behavior will be very difficult to curb.

How Can I Stop My German Shepherd from Sitting on Me?

Your best chance to stop your German Shepherd from sitting on you is to start when it is a puppy. Prevent it from sitting on you when it is small, and it is less likely to do it as an adult. Instead, it will get into more acceptable habits like laying beside you. We recommend placing a bed or creating a spot near you that your pet can use as you watch television. Many dogs will sit on the couch with you, but they will also sit by your feet.

If your dog has already learned this behavior, it will be a little harder to curb. You can try to train the dog by giving it treats when it gets down, but if that doesn’t work, you may need to seek out the help of a professional that can show you how to prevent your dog from sitting on you.

Summary: German Shepherd Sitting on You

We hope you have enjoyed reading over this list and have found a few that sound like your dog. If it’s scared or stressed out, we recommend allowing it to help your pet feel safe. Most of the others can be prevented by paying close attention to your dog so you know when it wants something before it has to resort to sitting on you. If you allowed it to sit on your lap when it was a puppy, it’s going to be a difficult habit to break, but not impossible. Plenty of positive reinforcement and patience will help you achieve success.

We hope you have enjoyed reading over this guide, and it has helped answer your questions. If we have helped you understand your pet a little better, please share this guide to why a German Shepherd sits on you and what you can do about it on Facebook and Twitter.

6 Reasons Why Dogs Growl (And How to Stop It)

4 Alternatives To The Cone of Shame