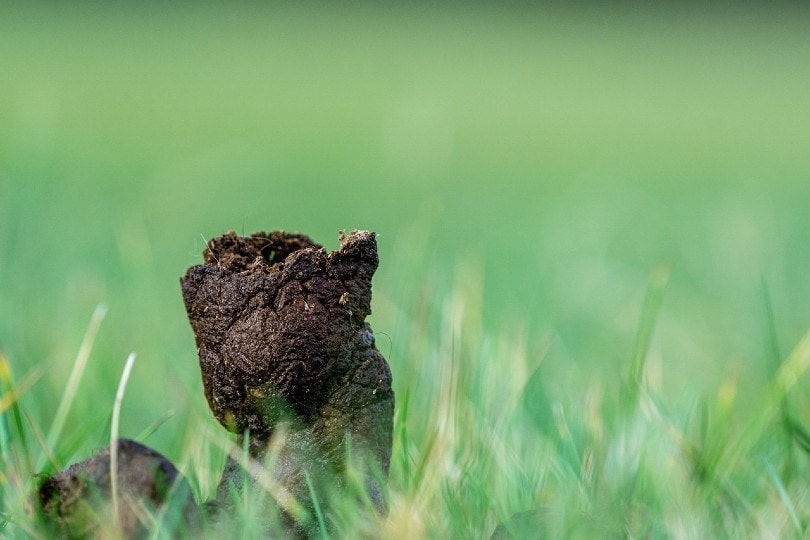 Dogs sometimes behave in ways we don’t understand or appreciate. They may act inappropriately or display unwanted aggression toward something harmless. Other times, canines follow instincts that have no basis with humans. Perhaps one of the most unpleasant aspects of pet ownership is coprophagy or eating stool.

German Shepherds are just as likely to show this unwanted behavior as any other breed. Some may theorize that instinctive drives are stronger in these dogs because of their resemblance to their wild counterparts. However, there are also other reasons why it occurs that may have health or behavioral roots. Knowing the cause can help you find a way to stop it.

The scientific community long believed that dogs evolved from wolves. New evidence suggests a different path where the two species share a common ancestor. That means some of the hardwiring that existed in the wild may still reside in your German Shepherd. Their canine ancestors lived a life of feast or famine. Coprophagy may be a remnant of those survival instincts.

2. The Trait Is Nutrient Driven

Dogs aren’t alone in this habit. Other animals will also eat feces, such as rabbits, nonhuman primates, and rodents. It’s essential for some species to get the nutrients from the foods they consume. While it may seem disgusting to us, it’s vital for the survival of these animals.

3. Maternal Instinct Is at Work

Dogs are born helpless at birth. They can’t fend for themselves, nor can they hear or see. They are utterly dependent upon their mothers. That even covers the most basic things, such as staying warm or eliminating. A female will lick the puppies to encourage them to urinate and defecate. To protect them and themselves, the pup will clean up after the offspring.

4. A Medical Condition Is Causing an Abnormal Appetite Spike

German Shepherds have a high propensity for many joint disorders, such as hip dysplasia. Another health condition that occurs frequently is thyroid disease. That can manifest itself in stool-eating behavior. Other culprits are Cushing’s disease and diabetes. Some disorders cause an abnormal increase in appetite, which a pup tries to meet this way.

5. Malabsorption Syndromes May Prompt a Dog to Look Elsewhere for Nutrients

Sometimes, a dog gets an adequate diet that is rich in nutrients. The problem isn’t with what it’s eating but how its body is absorbing—or not absorbing—the vitamins and minerals it consumes. One common cause in German Shepherds is small intestinal bacterial overgrowth (SIBO). The bacteria interfere with the absorption of nutrients, which a pup will try to meet with other inappropriate sources.

6. A Parasitic Infection May Encourage This Undesirable Behavior

An intestinal parasitic infestation can cause similar symptoms, such as an abnormal appetite. The parasites consume the nutrients that the German Shepherd should get from its diet. Dogs can get infected in various ways. One of the most common is eating the feces of other animals, such as rabbits.

7. Separation from Humans and Other Canines May Increase Anxiety

Other causes for coprophagy in German Shepherds are behavioral. This breed is an affectionate and loyal dog that is prone to separation anxiety if left alone too often. It’s an energetic pup that is intense with all it does. Failure to provide a mentally stimulating environment can set up the perfect storm for the pet to pick up undesirable behaviors, such as coprophagy.

The first step toward stopping this problem is getting your dog a thorough examination by a vet. As our list shows, several medical reasons may prompt this behavior. Your veterinarian will likely start by asking questions about when it occurs and if you’ve noticed a pattern. He will probably do a full blood workup to rule out the health conditions we mentioned, such as Cushing’s disease and diabetes.

Nutrient deficiencies are another common cause. Your vet may recommend a different food that will satisfy your pup’s dietary needs. A supplement is also an appropriate way to treat this condition. Your vet will likely recommend follow-up testing if a medical cause is behind the problem.

The next steps may focus on the behavioral side. Factors such as separation anxiety or long stretches in a crate can cause a dog to act in this manner. Sometimes, it’s attention-getting behavior, even if the result is negative and not praise. You should also take an active role in preventing it while on walks or at the doggy park. You may find reinforcing the meaning of “No” helpful.

It’s essential to understand that domestic dogs have the genetic makeup that equipped them for survival thousands of years ago. It’s the same with humans. Some of the canine instincts may not make sense to us. Nevertheless, they are perfectly normal in the canine world. Fortunately, correcting unwanted habits like stool eating is possible. It involves finding out the cause behind it and taking the appropriate actions.

How To Wash Dog Urine Out of Towels & Laundry

Can Dogs Eat Twizzlers? Are Twizzlers Safe for Dogs?