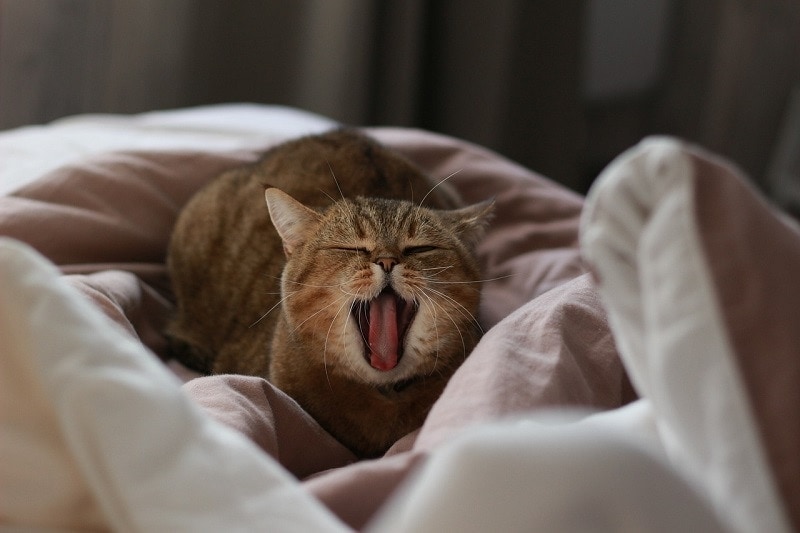 It’s the ultimate battle: cats versus dogs. We’re firmly on Team Cat and suspect that you might be too! If you’re looking for hard evidence as to why cats are better than dogs, we rounded up the top 12 reasons for you right here!

If you live in an apartment or a tiny house, space is at a premium. Dogs take up a great deal of space, sprawling on the couch or stretching out until they’re covering the whole bed! Cats don’t need much space at all and will often curl themselves up into small spaces out of choice. Cats don’t usually need as much “stuff” as dogs either. As long as they have a litter tray, food and water bowls, and a few small toys, they’ll be happy.

It’s true! The dog people might not like to admit it, but research has found that cat people generally score higher in intelligence tests than their canine-loving friends. The same study found that cat people are more likely to be introverted non-conformists, as well as being open-minded. We’ll let you decide if that description sounds like it fits!

Related Read: 10 Tips To Make Cats And Dogs Get Along

If you’re considering the environmental impact of keeping a pet, then cats are a better option than dogs. It’s been estimated that the carbon footprint of a dog is double that of an SUV, while for cats, it is roughly the same as a small car. They each have a footprint because they both eat meat, which involves resource-intense production methods. But since cats eat less than dogs, their carbon footprint is smaller as a result.

This benefit only really applies to cats kept indoors. Cats allowed to roam outside are responsible for killing a huge number of birds and rodents, which isn’t environmentally friendly.

While dogs really can’t be kept solely indoors, cats positively thrive in an indoor situation. Not only does it keep them safer, but you also don’t need to worry about walking them in bad weather, making sure they get enough exercise, or going to training classes. As long as your indoor cat has enough enrichment in terms of their physical and mental wellbeing, you can feel confident that your indoor cat is content and healthy.

If you’ve ever met a particularly slobbery dog, you know that you’ll be wiping slobber trails off your clothes afterward. You don’t need to worry about that with cats! Unless they’re suffering from an illness that makes them do so, cats just don’t slobber.

You also don’t need to worry about them splashing water all over the floor when they take a drink. Some dogs seem to get more water out of the bowl than in their mouths, leaving you with a bit of a clean-up job. Researchers have even found that the way that cats drink water is far more efficient than their canine friends.

6. Living with a cat has health benefits

Research has shown that the frequency of a cat’s purr is the same as that used for therapeutic healing. It’s also been found that living with a cat can reduce the likelihood of their owners suffering from a heart attack.

7. Cats are quieter than dogs

Some dogs just love to bark! Even the most ardent dog lover will have to admit that this is a comparison that cats easily win. While some cats can be more vocal than others, they’re definitely not as loud as dogs. Cats do have a range of different sounds, from a chirrup to a purr, to let you know that they want attention, but they’re rarely going to startle you with their decibel level.

8. Cats are cheaper than dogs

This, of course, depends on how much you plan to spend on your pampered cat, but as a general rule, it costs less to keep a cat than it does a dog. Our canine friends tend to have higher food bills and need more equipment in terms of crates, harnesses, toys, and more. Dogs also might need training classes, and veterinary bills for dogs are typically higher.

Related Read: Can Cats Eat Dog Food? What You Need to Know!

9. Kittens are easier to raise than puppies

Kittens do need a great deal of care and attention as they’re growing up, but they are less labor-intensive than puppies. Kittens generally figure out how to use a litter tray all by themselves, while puppies need intensive potty training. You might also decide to crate train a puppy, which requires hard work and dedication. Kittens can happily entertain themselves at home, and you don’t need to worry about coming home to chewed slippers or an accident on the floor.

Dogs can get pretty stinky, whether from rolling in poop or eating something they shouldn’t. Cats, on the other hand, spend hours every day keeping themselves sparkling clean. You won’t need to worry about expensive grooming sessions, regular baths, or trying to remove stubborn smells from your cat’s coat.

Cats know all about the personal bubble — we’re pretty sure they invented it! Sometimes all you want to do when you get home is relax for 20 minutes, and your cat will appreciate that. Dogs, on the other hand, will be bouncing next to you, desperate for attention, a walk, or anything! Cats are quite happy to come and demand attention from us when they want it, but for the rest of the time, they’re probably sleeping or cleaning themselves!

Dog owners might say that cats don’t love their owners, but the research suggests otherwise. A study in 2017 found that cats will choose interaction with humans over and above everything else, including toys, food, and even catnip. If that doesn’t convince you that cats are better than dogs, we don’t know what will!

What Do Cats Think About? (Understanding the Feline Mind)

Can Cats Eat Meatloaf? What You Need To Know!