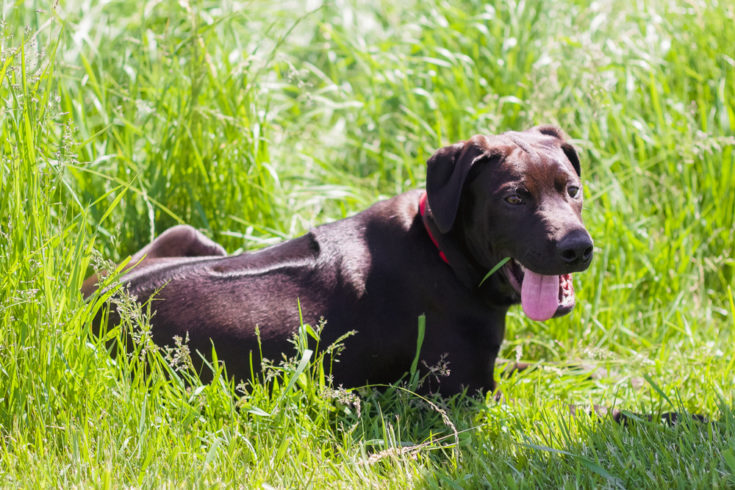 Rhodesian Labradors are created when a Rhodesian Ridgeback is bred with a Labrador Retriever. It’s been discovered that these two breeds make wonderful puppies.

People who have brought this Rhodesian Ridgeback Lab mix hybrid into their home have discovered what a wonderful pet they make. They are very lovable and can be very goofy, which makes it a very interesting and fun breed to have. Are you interested in knowing more? Read on, and we’ll tell you everything you need to know about owning one of these dogs.

Rhodesian Labrador Puppies – Before You Get One…

As puppies, Rhodesian Labradors are going to be very energetic and love playing, so you need to provide your puppy with a lot of space that’s safe for them to play. A good option is a fenced-in yard, or make sure that they’re leashed when out. You should also take them out for short walks frequently because they are prone to injuries to their joints.

2. The puppies are somewhat stocky and thick.

They have muscular builds that are similar to grown Ridgebacks. Since the two breeds are pretty athletic, you’ll discover that these hybrids have a lot of endurance and strength.

3. They’re easily excited when out and about.

Even though Rhodesian Labradors are often calm when they’re at home, even while they’re young, when you mention going outdoors, they’re going to get excited. When you put their leash on, your pup’s going to beg you to get that door open so they can go outside.

Temperament & Intelligence of the Rhodesian Labrador🧠

Confident, happy, and calm, Rhodesian Labradors enjoy pleasing their owners but they also can be stubborn from time to time. Instead of overreacting when this occurs, you should show them a lot of praise when they do something right, along with giving them treats.

These dogs need strong leaders; otherwise, they’ll think they’re the boss and then act like it. firm and kind management will be needed to bring out their best. They are able to adapt to living in an apartment since they’re quiet and calm when they’re inside. However, they will need to be walked daily so they can let off their energy.

They’re not noisy, however, they’re going to let you know when there are strangers around. Even though they aren’t aggressive, they often will posture for frightening away perceived intruders.

They also chase smaller animals, so it’s a good idea to train your Rhodesian Labrador to help with eliminating this problem. Socialization will also help. However, you should always be careful.

These dogs make great companions for kids and they love playing. Affectionate and protective, their heart is as large as their body, so they’re huge softies with their families.

These dogs can get along with other dogs and cats, but they have to be socialized at a young age. It’s important to be aware of possible problems and not leave them alone. If you are concerned about your pets, this probably isn’t the dog for you.

Things to Know When Owning a Rhodesian Labrador:

Now that you know some of the basics of the Rhodesian Labrador, we’ll give you some information about what life is like with this great dog.

Rhodesian Labradors need a minimum of 2.5 cups of kibble each day. If they are very active, you can take this to 3 cups. The price of the food will range $40-$60 per month

Because they often will overeat, you want to schedule your dog’s mealtime. You want to keep their food out of their reach. If you aren’t careful and allow them to have free reign to their food, your dog may become bloated.

It’s important to choose food that is rich in protein and has meat as its first ingredient. It’s also a good idea to choose food that has a lot of glucosamine in it because of their problems with their joints and hips. Lastly, choose kibble with large pieces to help avoid bloating.

When they’re in the house, Rhodesian Labradors are quiet and calm. When they are outside, they’re energetic goofballs who love playing with kids. As house pets, they are going to do fine with walking each day for exercise. However, if you want your dog to be playful, you want to make sure that you are playing with them.

When you’re walking a Rhodesian Labrador in the park, you want to use a retractable leash so they are kept calm. Smaller animals and low-flying birds might trigger your pet’s prey drive and protective instincts, so they might chase the animals and bark wildly.

Something else to be careful about is the deterioration of the joints and hips. It’s suggested to have 12 hours of exercise per week, including walks and playtime, so divide that up over 7 days.

Rhodesian Labradors need proper socialization and training from an early age. The reason for this is due to their instinct to be aggressive and alert towards strange animals and unfamiliar people. They also might bark when you take them to the park and people try to pet it. So, you want to teach them how to act when they’re around people they don’t know from an early age. The good news is that they are fast learners and want to do everything that they can do to please you.

That being said, there could be instances during which your Rhodesian Labrador might consider themselves the house’s alpha. When they display unwilling behavior or stubbornness, you want to show that you’re the alpha in your house.

They also have a reputation of sulking in a room’s corner and staying quiet if you are acting harshly while training. Be consistent and firm with practice and give them positive reinforcement such as treats.

It is also important for owners to avoid keeping the Rhodesian Ridgeback Labrador on a short leash or a cage. It prefers to move freely about the house and interact with its family. A retractable leash is also recommended.

Rhodesian Labradors are moderate shedders. You will want to brush him twice per week at least using a bristle brush. Sometimes, this hybrid will inherit the double coat for which the lab is known, which means it will need to be brushed more frequently. Because of its short coat, you don’t need to bathe it too often, so only bathe it as needed if your dog starts to get an odor or if they get dirty.

Even though its coat is low maintenance when compared with other large dogs, you will want to keep an eye on your dog’s ears. It’s essential to remove dirt and wax buildup since they fold over and create a moist environment. This means that bacteria grow, and this can cause infections.

You will also want to keep up with their nails. If you don’t feel comfortable trimming the nails yourself, take him to a groomer.

There are quite a few health issues that a Rhodesian Labrador might have, so it’s a good idea to find out the health of the parents. Most puppies will inherit their health conditions and diseases from the parents, so that is why it’s good to know about the parents.

Because Rhodesian Labradors have large frames, they are prone to problems with their joints and hips. They also often will overeat, so you want to make sure you’re keeping a strict schedule for feeding.

Along with the serious and minor conditions listed below, these dogs are also occasionally diagnosed with Von Willebrand’s Disease and progressive retinal atrophy.

Final Thoughts on the Rhodesian Labrador

Rhodesian Labradors are low maintenance and they make wonderful family dogs. They’re great with kids and other animals as long as they are socialized early enough. They are also very intelligent so they can pick commands quickly.

It’s important to know that they can be stubborn, however, and they have instincts that make them great guard dogs. When they feel as if their family’s being threatened, they may not listen. Due to this fact, it’s recommended that they are purchased by an experienced dog owner. You should also sign up your dog for obedience classes.

Dog Breeds With Green Eyes: How Rare Is It?