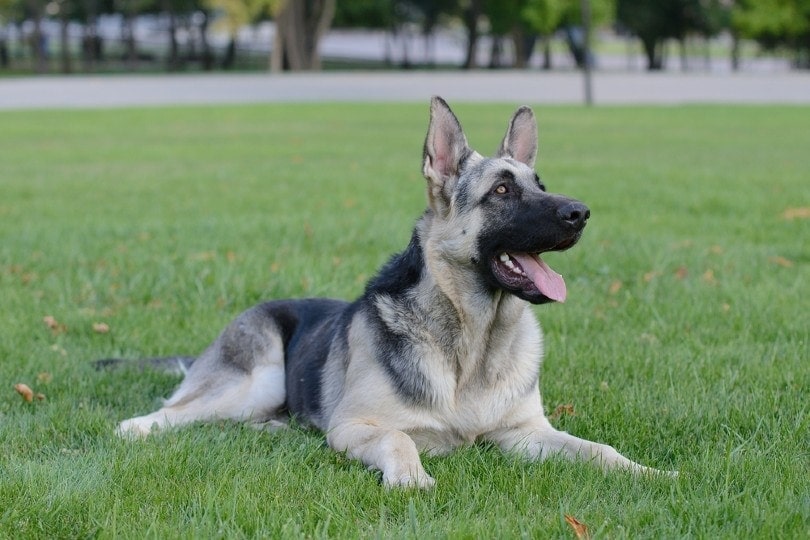 The Silver German Shepherd is a coloration of the German Shepherd and, as such, it has the same temperament and characteristics as any German Shepherd. This means that you can expect a dog that is loyal and watchful, loving and that is obedient, and easy to train, although this breed can have a somewhat stubborn side so patient training is key.

Originally bred as the ultimate herding dog, the German Shepherd has become a very popular breed around the world. It is not only used as a herding dog, anymore, however. It is a popular family dog and also finds utility as a police dog, armed forces dog, and service dog. It is regularly deployed in search and rescue efforts and has privately been used as a watchdog and guard dog because it combines strength, obedience, and formidable appearance.

However, during the aftermath of World War II, the breed nearly became extinct, especially outside its home borders, and underwent something of a rebranding to help recover its popularity. Read on to find out more facts about the popular silver German Shepherd.

Difficult to find, the silver German Shepherd puppy can cost more than a standard color and you should expect to pay around $1,500 for a healthy puppy with good breeding. Their rarity means that it is unusual to find this coloring in shelters. Because they are still used as guard dogs, you must meet a rescue dog before you consider adopting it.

Find a reputable breeder. Check with the kennel club for recognized breeders and be prepared to ring around to find silver or grey German Shepherds because they are rarer. Meet the puppy and at least its mother before buying and taking your new dog home and ask for evidence of health screening to ensure that it has less chance of hereditary conditions that the breed is prone to.

1. It Is a Relatively New Breed

In the dog world, the German Shepherd is considered a relative newcomer. The dog was first bred in 1889 by Max von Stephanitz. He wanted to create the ultimate herding dog. Von Stephanitz believed that the dog should be bred primarily for herding but their purpose soon evolved. Many critics say that the modern breed is too far from his ideas to be considered a true German Shepherd.

In Germany, it has the breed name Deutscher Shaferhund and in parts of Europe it is also sometimes known as the Alsatian, a name which was given to it after World War II when its popularity waned and breeders wanted to reinvigorate its popularity.

You may also hear it called the Berger Allemand and it was, between 1917 and 1930, simply known as the Shepherd Dog in the USA.

3. The First Guide Dog Was A German Shepherd

Although it is the Golden Labrador and the Golden Retriever that we most often see working as guide dogs, the first example of this type of service dog was a German Shepherd. Following the formation of The Seeing Eye in 1929, the breed was trained and used for the purpose.

It was later decided that the German Shepherd was better suited to police work while the friendly demeanor of the Lab and the Retriever meant they were better as blind dogs.

4. They Have Their Own Sport

The Schutzhund sport was created specifically for German Shepherds. It tests the ability of the dog but was also designed to identify those that were untrainable. The sport is more inclusive now and allows dogs of other breeds to compete.

5. They Featured in Both World Wars

Although the breed originates from Germany, it was used by both German and Allied forces in World War I and again in World War II. They found many uses during the conflicts, from running messages to identifying danger and alerting their handlers to the presence of those dangers. They are still used in conflicts around the world, today.

The recognizable image of the breed and its ability to follow commands even under great pressure has seen the breed used in a wide variety of occupations and settings, including on set as movie stars. Rin Tin Tin, who was born and bred in France, featured in 27 films and has his own Hollywood Walk of Fame star.

7. Silver Is One Of 11 Recognized Colors

The color that most people recognize as being that of the German Shepherd is black and brown. Most people have also seen the black German Shepherd and some may have even seen the white. There are 11 recognized colors including the tan and black, white, and black variations. Silver is one of the other colorations that is considered acceptable. Although liver and blue are recognized colors, these are considered to be faults.

8. They Rank as the Third Most Intelligent Breed in the World

Bested only by the hyper-intelligent Border Collie and the equally smart Poodle, the German Shepherd is ranked as the third most intelligent breed in the world. They are well known for their loyalty, watchfulness, and their energy levels, but they are also renowned for being highly intelligent animals. They pick up new commands after five repetitions and will obey the first command on 95% of occasions. This has pushed their popularity as a working breed.

The German Shepherd is one of the most popular breeds in the world, and especially in the US where they are ranked as the 2nd most popular breed. This is, in part, because they are not only popular as pets but also as working and service dogs. They have a very loyal following of owners and fans that swear by the breed, as well as many people that dream of one day owning the breed.

Top 10 Most Loyal Dog Breeds in the World