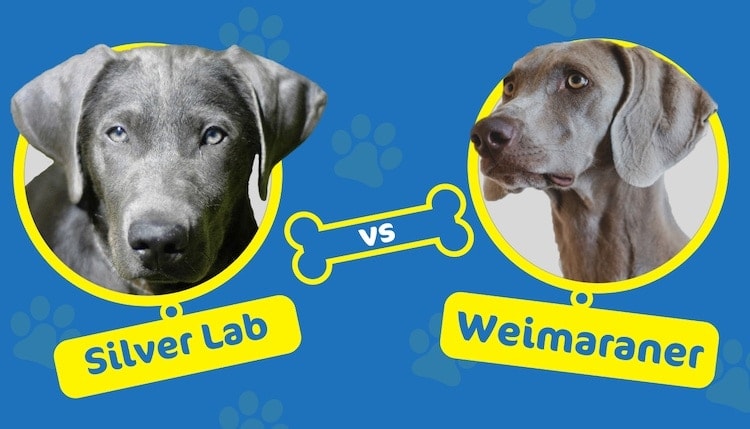 The canine world is full of uniquely colored dogs, including many that are a result of genetic mutations. Silver-coated dogs are just one example of this fascinating genetic anomaly.

Both the silver Lab and the Weimaraner boast this standout coloration. Though these two dogs are only distantly related, each gets its fur color from the same gene. However, while the Weimaraner always has silver fur, the Labrador Retriever only develops this color on rare occasions.

So, where does the gleaming coat of the silver Lab and Weimaraner come from? And which of these gorgeous dogs is right for your home? 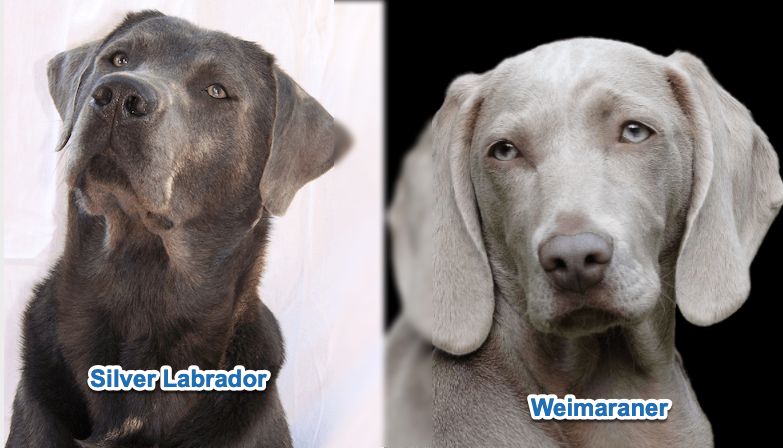 The Silver Labrador and the Silver Weimaraner have a lot of visual similarities, but they do have their own set of unique characteristics. Let’s break it down.

Labrador Retrievers hail from Newfoundland, Canada, where the breed was first developed as a hunter’s water retrieval companion. From Newfoundland, the Labrador was brought to England, where British breeders continued to fine-tune the breed standard.

Many breed experts believe the silver Labrador Retriever first appeared sometime in the 1950s. Whether this sudden genetic shift was a result of cross-breeding, mutation, or something else is entirely up for debate, but there’s no question that the silver Lab has garnered fans around the nation.

Overall, Labrador Retrievers are sturdy and well-built. While the breed’s body is a bit thick and stocky, at least when compared to more agile breeds, these dogs are still remarkably athletic. Labs have wide heads and medium-length tails, which double as a rudder in the water.

Of course, the most striking physical trait of the silver Lab is its fur. While this dog’s coat texture and length are the same as any other Labrador Retriever, its color is not. Silver Labs have glistening, warm-toned gray fur.

The Labrador Retriever is the most popular family dog for a reason. The breed is outgoing, friendly, easy to train, and incredibly intelligent. As loyal companion animals, Labs should be included in household activities whenever possible.

Though it’s true that the Labrador Retriever is a good-natured breed, obedience training and early socialization should not be ignored. Putting in the necessary time and hard work will help ensure that your puppy grows into a well-adjusted adult dog.

True to the breed’s origin story, modern Labs are avid hunting companions. Many hunters, both casual and professional, rely on Labrador Retrievers when out in the field. Outside of hunting season, you can keep up with your Lab’s exercise needs by participating in dock diving or another canine sport.

On average, silver Labrador Retrievers have approximately the same life expectancy as the rest of the breed, living to be around 10 to 12 years old. Because of the breed’s infamous appetite, maintaining a healthy diet and exercise regimen is key to any Lab’s longevity.

Silver Labs are also prone to the same health issues as other members of the breed, including various cancers, hip and elbow dysplasia, bloat, and eye disorders. Reputable breeders will track risk factors for these conditions in order to produce healthy, long-living litters.

On top of breed-wide health concerns, there is another condition specific to silver Labs (or any dog carrying two copies of the dilute gene). Color dilution alopecia is not life-threatening, but it is a chronic condition that can leave your dog with hair loss and dry/irritated skin.

Not all silver Labs will develop this condition, and not all cases of color dilution alopecia are of the same severity. Still, it’s important to understand the risks before bringing home any dog with diluted fur.

The grooming needs of a silver Labrador are the same as any other Labrador Retriever. The breed has a thick, water-resistant coat that needs minimal care.

Weekly brushing is typically enough to keep your dog’s coat clean and free of loose fur. More frequent grooming may be needed during times of heavy shedding.

The Weimaraner has the same gray coat as the silver Lab, but these two dogs are entirely different breeds. Originating in Germany and named after the town of Weimar, the Weimaraner is also called the Weimar Pointer. Credit is given to Duke Karl August for developing the breed, who supposedly crossed various breeds with Bloodhounds to create an ideal hunting partner.

Originally, the Weimaraner hunted large game across Europe, including bears and wolves. Today, the breed’s hunting pursuits are primarily limited to wild birds. While many dogs are still used for hunting, the Weimaraner enjoys family life above all else.

Like the Labrador Retriever, the Weimaraner gets its distinctive coat from the dilute gene. Unlike the Lab, every member of the Weimaraner breed carries two of these genes, guaranteeing a silver coat in every puppy.

The Weimaraner is a large, athletic breed, with slender limbs and a proud posture. Its head is on the smaller side when compared to its body, framed by large, drooping ears. According to the breed standard, a Weimaraner should be solid gray, with the exception of a white patch on the chest.

The breed’s natural tail is long and slender, but docking is standard practice. In fact, the American Kennel Club lists a docked tail as a required part of the Weimaraner’s breed standard. Traditionally, tail docking helped protect dogs from injury when out hunting.

As an independent hunting companion, the Weimaraner was bred for intelligence. Unfortunately, many owners quickly discover that this dog doesn’t just blindly obey orders!

When training a Weimaraner, it’s important to start early and be consistent. If this dog sees any opportunity to take control of the training session, it will. Novel training exercises will keep your dog engaged and make redirecting the Weimaraner’s too-smart-for-its-own-good attitude a little easier.

Overall, the best way to manage a Weimaraner’s physical and mental energy is to tire it out with plenty of exercise. The breed loves running, either solo or with its human companion, and needs at least two hours of daily exercise.

Weimaraners are fairly healthy, living to be around 10 to 13 years on average. The breed’s active lifestyle can lead to plenty of random injuries throughout its lifetime, but the most serious condition common to the breed is bloat.

Hip dysplasia, hypothyroidism, and heart disease are other common ailments found in the breed. Rarely, Weimaraners can develop a condition following vaccinations called hypertrophic osteodystrophy, which affects their bones.

Since the Weimaraner gets its silver coat from the same genetic mechanism as the silver Lab, this breed can also develop color dilution alopecia.

Nail trimming is important for any dog breed, but this is especially true for the Weimaraner. Owners should also pay attention to the breed’s ears, which can easily fall victim to infection because of their shape.

Silver Lab vs. Weimaraner: Which Is Right for You?

Most notably, Weimaraners are much more active than their Labrador Retriever counterparts. This doesn’t mean that a silver Lab can be left to lounge on the sofa all day, but it does mean that prospective Weimaraner owners should prepare themselves for a great deal of running and playing.

Whichever silver-coated dog you choose, both the silver Lab and the Weimaraner are sure to make a worthwhile companion. Who knows, maybe you’ll end up bringing home one of each!

Looking for other helpful dog breed comparisons? Check out: 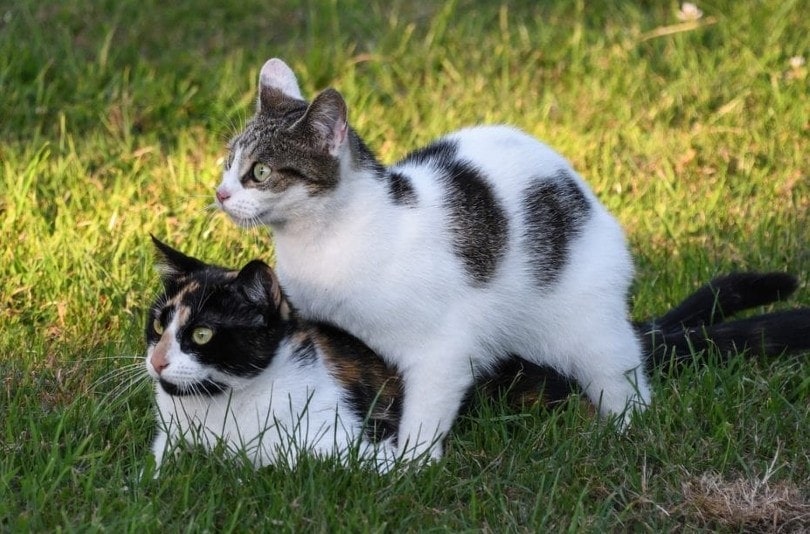 How Often & How Long Cats Are Cats in Heat? 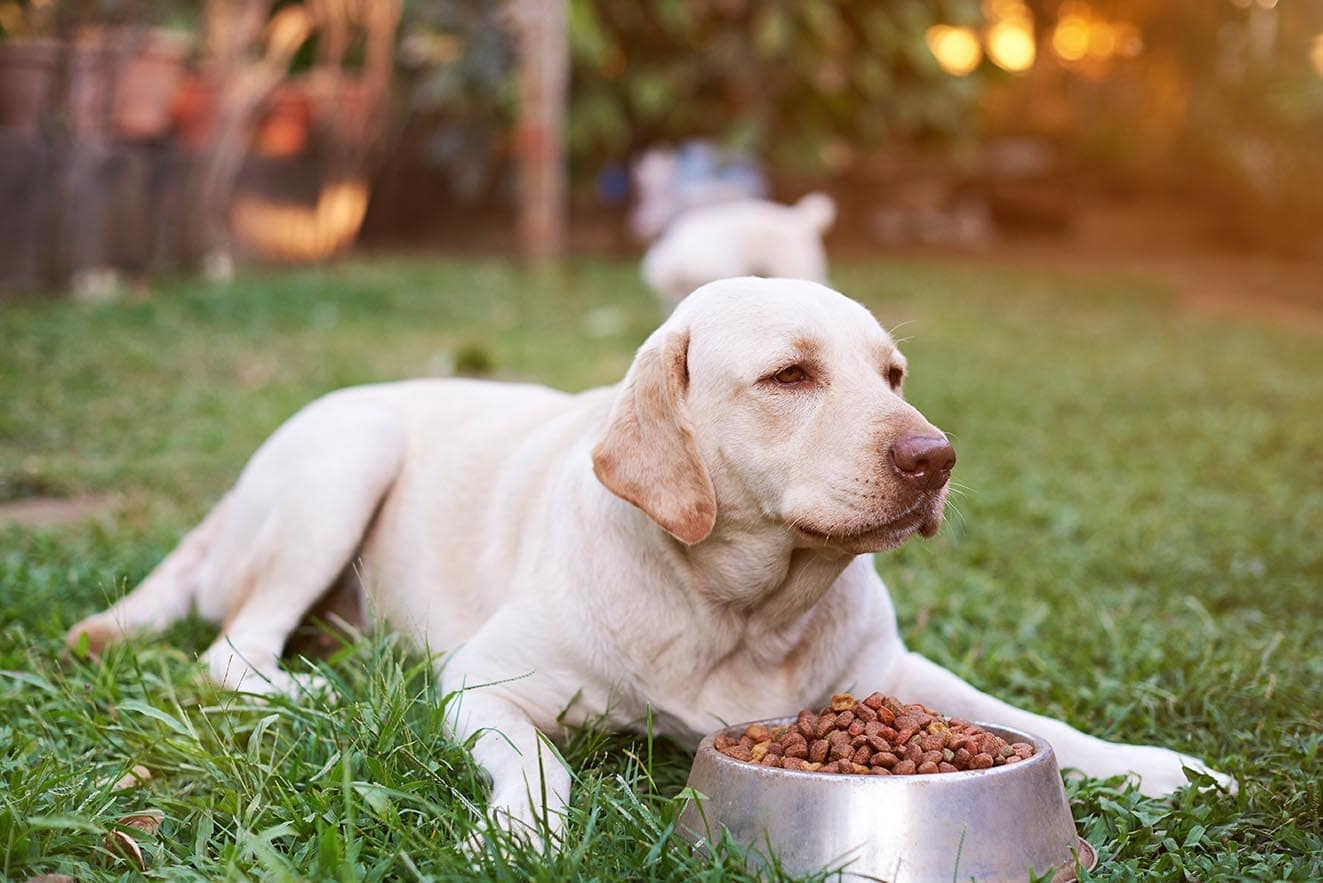 How to Keep Birds Away From Dog Food (7 Proven Methods) 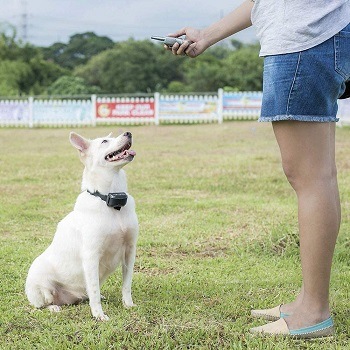 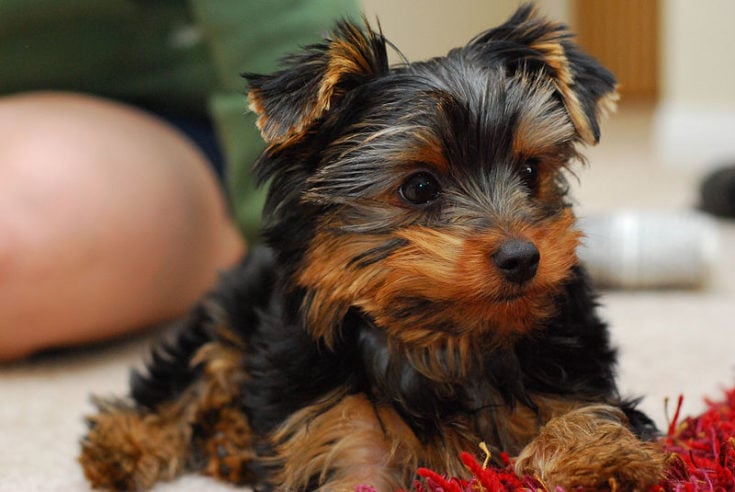