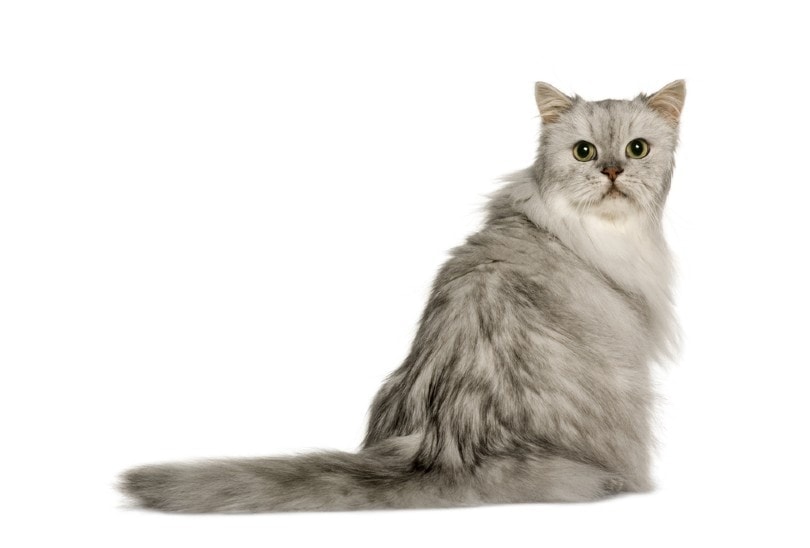 Elegant and noble, the Persian cat has long been considered one of the most sophisticated cat breeds. They’re quite popular too, and it’s not hard to see why, given their grace and beauty.

Over the years, quite a few offshoots of the basic Persian have come into existence, and an assortment of coat colors have been developed. Of these, the silver Persian is often the most prized.

Silver Persians have an immaculate appearance, and their regal bearing never fails to command attention. It’s no wonder these cats are so beloved — but being beloved isn’t the same as being understood.

In this guide, we’ll reveal more interesting facts about this breed, as well as dispel a few myths along the way.

The Earliest Records of Silver Persian Cats in History

The Persian breed is thought to have originated in Iran, but there’s little record of them there. In fact, attempts to tracing this breed’s ancestry usually led to Western Europe rather than the Middle East.

The first Persian cat was actually introduced in England. This cat, introduced at a cat show in the late 19th century, isn’t thought to be the first Persian — it’s merely the first recorded Persian. Still, we have little information about the breed before that time or of their ancestors.

While the Persian breed has been around since at least 1871, it would take nearly 12 years before the first silver Persian hit the scene.

The earliest known documentation of a silver Persian comes from England in 1882. A cat named “Chinnie” is thought to be the first known silver Persian, and while we don’t have any photographic evidence of her beauty, there are pictures of her silver grandchildren out there.

One of those grandchildren, a male named “Silver Lambkin,” is often thought of as the father of the breed. As a matter of fact, many prestigious silver pedigrees in existence today trace their lineage right back to Silver Lambkin.

There’s little in the way of records or documentation about these cats before 1906, so it’s hard to give an authoritative answer about their origins.

However, many experts believe that silver Persians were among the first types of this breed. If that’s the case, it’s likely that they enjoyed considerable popularity ever since the dawn of the breed.

Today, silvers are one of the most prized colors of Persians, in part because breeding them is so difficult. That doesn’t lessen the demand for them, but it does drive up their price (especially if they can prove that they’re related to Silver Lambkin).

Persians weren’t officially recognized as a breed until 1906, when the Cat Fanciers’ Organization was formed and acknowledged them, along with a host of other breeds.

Silver was one of the few colors recognized at this time, so they’ve been legitimate for as long as the breed itself has.

That said, there have been other organizations that were less enthusiastic about recognizing the breed. Persians were often lumped in with other breeds under the umbrella term of “longhair cat,” and it took years before many people acknowledged them as being different from the Angora.

1. Silver Enthusiasts Swear That They’re More Active Than Persians of Other Colors

In most breeds, you won’t see much in the way of personality differences between cats of different colors. This is not the case with silver Persians, according to those who own them — these cats are supposedly much more active than their other Persian brethren.

They also tend to have lower birth rates and mature earlier than other colors, and they may end up smaller when fully grown.

2. These Cats Once Had a Reputation for Being Moody

For much of the early part of their history, silver Persians were known for being almost impossible to handle. That may have been part of their appeal, actually — the strikingly beautiful cat that could only be looked at, not touched.

Nowadays that problematic behavior has largely been bred out of them, and silver Persians are just as affectionate as any other color.

Many silver Persian breeders would occasionally find a darker kitten showing up in their litters. These cats, called “brownies,” were rehomed as pets, because they weren’t considered suitable for showing. This brown color is due to a recessive gene in silver Persians.

By the 1960s, however, some breeders began to try to breed those brownies on purpose. They were soon successful, and the resulting golden-colored cats became almost as prized as their silver forebears.

While most Persians are known for being laidback and relaxed, silver Persians are much more active. You’ll have to give them more exercise and mental stimulation than you would Persians of another color.

They’re equally likely to suffer from certain health issues as other-colored Persians, though, so don’t expect them to be cheaper or more expensive in terms of vet bills.

Like all Persians, they do require quite a bit of grooming, but it’s relatively painless. They actually tend to enjoy getting brushed and bathed, so you won’t walk away with a ton of scratches every time you pull out a brush or turn on the faucet.

If you want a cat that’s the picture of grace and beauty, you won’t find an animal more elegant than the silver Persian. These fluffy felines are as loving as they are gorgeous.

There are plenty of other-colored Persians out there, of course, and they’d all make fine pets. If you want the cream of the crop, though, there’s nothing that can quite match up with these striking silver cats.

My Cat Has Fleas, How Should I Clean My House?

How Much Does a Singapura Cat Cost? (2022 Price Guide)

Can Cats Drink Goat Milk? What You Need to Know!