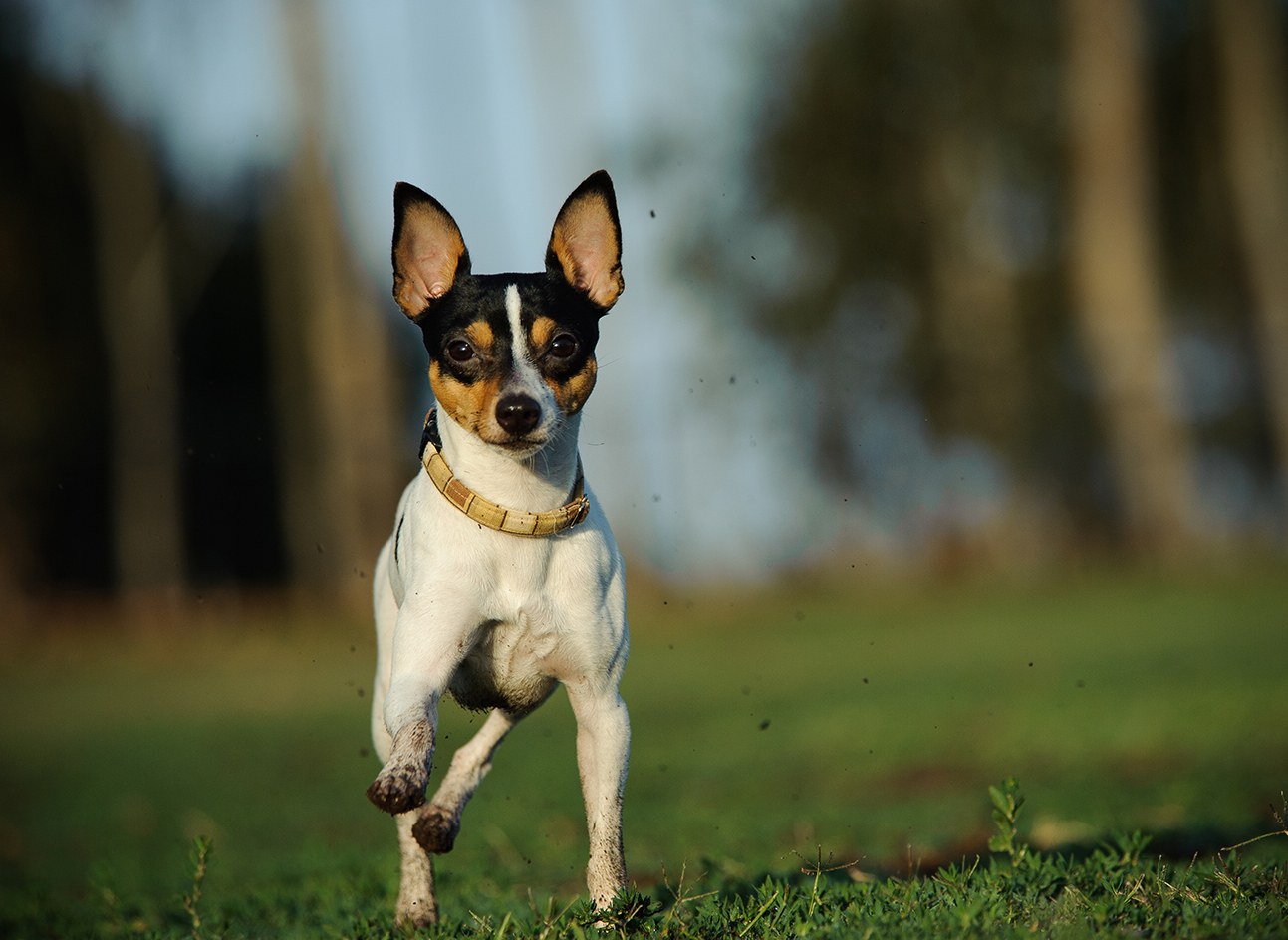 The Toy Fox Terrier is a small dog that began as a barn ratter. It never quite reaches a foot tall and its square in proportion with large erect ears and dark eyes. Its nose is black except on chocolate dogs where it’s brown, and it has an erect tail.

Breeders created the Toy Fox Terrier in the early 20th century. It has the hunting instincts of the terrier with a charming personality that some might describe as sneaky. It’s an intelligent dog that was very popular in the circus.

Toy Fox Terrier Puppies – What You Should Know Before You Buy…

How Much Do Toy Fox Terrier Puppies Cost?

You can probably find a Toy Fox Terrier for around $1500. Still, you should expect to pay anywhere from $900 to $4300 for a Toy Fox Terrier depending on several factors, including breeder quality, tests performed, and parent cost. A higher-quality breeder will help you get a higher quality dog with less risk of genetic health issues appearing as the dog ages. You can often find a Toy Fox Terrier in a local pound for far less money.

You will need to purchase a lot of other things besides the puppy should you choose to buy one. You will need food, flea and tick medication, treats, a leash, dog bowl, and lots more.

2. The Toy Fox Terrier is also called the Amertoy.

3. The Toy Fox Terrier wasn’t recognized as a unique breed by the American Kennel Club until 2003.

The Toy Fox Terrier is friendly and loyal to its owner. It’s a determined breed that doesn’t back down and is not easily intimidated. They are known for being funny and playful and enjoy human company. It likes to be held and carries and is a quiet dog, except when it’s alerting you of intruders.

The Toy Fox Terrier is smart enough to be in the circus and can learn many tricks. It can even learn multistep tasks with ease. You may also find it attempting to trick you into doing what it wants.

The Toy Fox Terrier is a fantastic family pet. Its small size allows it to adapt to any environment. It loves to play games and act the clown, so it’s a perfect companion for small children while it’s high intelligence level will help it impress adults with its tricks and its charm.

The Toy Fox Terrier gets along with other pets, but it’s not easily intimidating, so if another pet tries to play bully, your Toy Fox Terrier can get a bit loud as it demands respect. If you socialize your dog early, it will get along with other pets and will often play games with them. Since it won’t back down, you’ll need to worry about hostile dog encounters on your walks. It’s best to carry them away from any potential conflict long before there’s a problem.

Things to Know When Owning a Toy Fox Terrier

Here are some of the most important things to consider before you choose to purchase a Toy Fox Terrier.

The Toy Fox Terrier is a toy dog, so it isn’t going to eat much, but that also means that every little bit will have a much larger impact on your pet’s digestive tract as well as its health. We recommend discussing with your vet if a specialized toy dog food is right for your dog. In some cases, it can help, while in others, it can cause the dog to grow too fast, creating bone problems. No matter what brand of food you choose, you want to make sure it has lean whole meat listed as its top ingredient. Examples of good meats include chicken, beef, turkey, and lamb.

Since the Toy Fox Terrier is so small, it will likely get the bulk of its required activity accomplished by following you and any other family members around the house all day. If you have stairs, they get even more exercise because they will run up and down the stairs dozens of times each day. However, they do enjoy games of fetch and going for short walks. They are naturally curious and enjoy being outdoors to explore.

Training the Toy Fox Terrier is easy, and only requires a lot of positive reinforcement. This breed loves to entertain and please its master. Many times, no treats are needed if you freely give out rubs behind the ears. We found that more often than not, they will be having so much fun they will try to extend the training session well beyond what you had in mind.

The Toy Fox Terrier is extremely easy to groom and only requires a light brushing once or twice a week. Even though they shed, they don’t leave much hair around the home, and they rarely need a bath unless they get into something. You will also need to brush their teeth as often as they will allow and clip their nails when you hear them clicking on the floor.

Not sure what these conditions are? Here’s a quick rundown:

Patellar luxation is a condition that affects the tendon that keeps the kneecap in place. As the tendon stretches, it allows the kneecap to move out of place more often. An out of place kneecap will make it difficult for your pet to apply weight to the knee, and your dog may swing the leg out in an attempt to put the knee back in place. Several surgical procedures can help give your pet back its quality of life.

Legg-Calf-Perthes is another condition that affects the bones and causes your dog to walk with a limp. The limping usually begins gradually and progresses over time. Eventually, your dog will not be able to put weight on the leg. It’s important to maintain proper body weight to slow progression, and your pet can take medication to ease the pain.

Von Willebrand’s disease is the most common genetically transferred bleeding disorder in dogs. A deficiency of the protein that causes blood to clot is behind the disorder. There may be no symptoms of this disease, but you may see blood dripping from the nose or other openings of the body. Blood transfusions may be able to help in some cases.

Obesity is a serious concern for the Toy Fox Terrier. Because of its small size, it’s easy to overfeed it and if they don’t get enough exercise to burn off the excess. Obesity can lead to high blood pressure, heart disease, constipation, and several other ailments. It also puts a large amount of stress on the bones, which can lead to arthritis and other bone conditions.

There is no discernable difference between the male and female Toy Fox Terrier.

The Toy Fox Terrier is the perfect family dog. It’s also the perfect small apartment, a city-dwelling dog because its small size doesn’t need a lot of exercises, and it doesn’t bark except to give you a heads up about any potential intruders. It’s an attention hog that loves clowning around with family members to get a reaction.

We hope you have enjoyed reading about this tiny toy breed. If you think it would make a nice pet for someone you know, please share this complete guide to the Toy Fox Terrier on Facebook and Twitter.