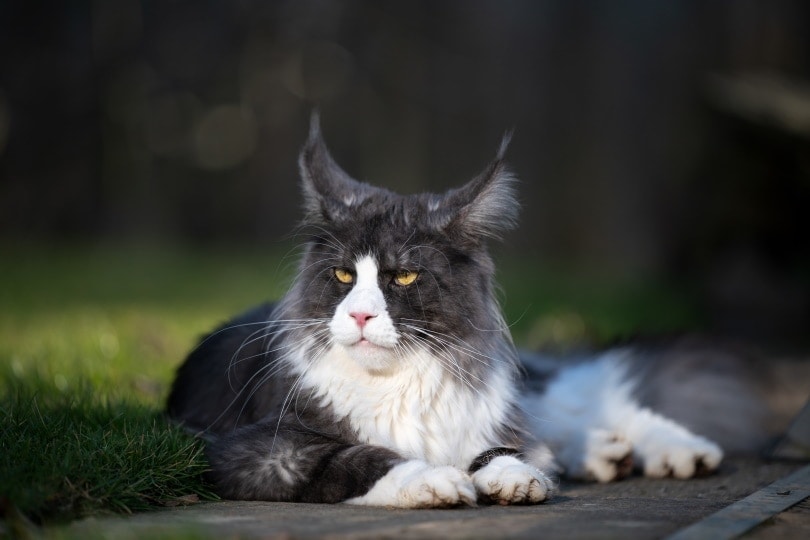 The Maine Coon is a popular breed in the United States for good reasons. They are friendly, sociable, and beautiful cats. There are many different coat patterns and colors for Maine Coons. One of the most interesting is the tuxedo coat. This coat pattern looks like the cat is wearing a tuxedo! The cat’s main coat color is black with a white neck, chest, and paws.

These beautiful cats have a history shrouded in mystery and some interesting features. Read on to learn more about the Tuxedo Maine Coon!

The Earliest Records of Tuxedo Maine Coons in History

Whether or not this is true, the Maine Coon has been in the United States for a long time. They have been popular farm cats for a very long time. This breed is the official cat of the state of Maine, which is also where they get their name. The tuxedo coat style doesn’t have a specific origin but is one of the more popular coat styles found in the Maine Coon today.

Their friendly nature and great hunting skills contributed to the growth in popularity of the Maine Coon throughout the 1800s. The first time this breed was mentioned in an official publication was in 1861’s The Book of the Cat. The Maine Coon mentioned in this book was black and white, which indicates it may have been of the tuxedo variety.

The breed’s popularity continued throughout the remainder of the century. A Maine Coon won the Best Cat in the New York or Boston cat shows in 1895, 1897, 1898, and 1899. However, once the 20th century began, the breed began to drop in popularity. This continued, and in the 1950s the numbers of Maine Coons in existence dropped worryingly low.

Luckily, for lovers of these big, friendly cats, the 1960s brought a resurgence in popularity. This has continued and today the breed is one of the top 10 most popular cat breeds in the country.

The Maine Coon was first mentioned in a book in 1861. Around the same time, there were Maine Coon-specific cat shows in Maine. The tuxedo coloring was just one of the coat patterns popular with this breed in these cat shows.

Maine Coons are an interesting and original cat breed! Here are just a few unique facts about these beauties:

Does a Tuxedo Maine Coon Make a Good Pet?

Tuxedo Maine Coons make wonderful pets! They are one of the top 10 most popular cat breeds in the United States. They get along great with kids, other cats, and even dogs. The breed is generally pretty healthy and, aside from grooming, does not require special care. Their long coats do need to be brushed frequently and they need regular nail trims. Even with regular brushing, the Maine Coon does shed a lot.

As long as you can give them the care they need, you’d have a tough time finding a more family-friendly cat. The Maine Coon is playful, friendly, and sociable. They are loyal and like to follow their people around all day. You can play games like fetch with your Maine Coon. They also tend to enjoy the outdoors so if you introduce them to a leash and harness from a young age, you might have a hiking companion on your hands too! Just be careful to always have them on a leash and supervise them when they are outside to keep them safe.

From their mysterious origins to their popularity today, the Tuxedo Maine Coon is an interesting cat. They’ve been common throughout the eastern United States since the early 1800s. Their beautiful coats and even better personalities make them a great pet choice for many families. Now that you’ve learned about the history of the Tuxedo Maine Coon, you can impress your friends with your knowledge of these great cats!

Can Cats Eat Lentils? What You Need to Know!

Can Cats Eat Poppy Seeds? What You Need to Know!