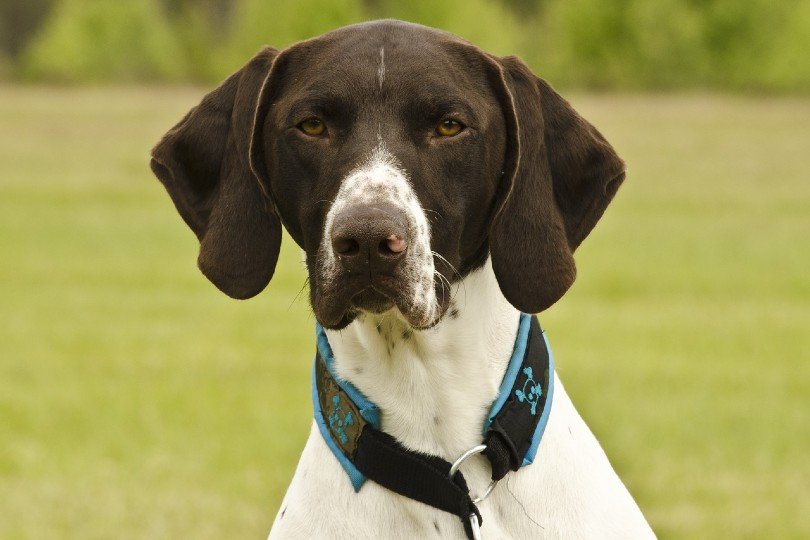 If there’s one belief that’s common to every single moral philosophy on the planet, it’s that snitches get stitches.

Don’t tell that to Pointer dogs, though. They’ve been ratting out game for as long as they’ve been around, which is how they’ve become an indispensable companion for bird hunters. You don’t have to carry a shotgun to love these dogs, though, as they make wonderful companions even if the only thing you ever hunt for is a bag of potato chips.

While many dogs can be taught to point, there are only five breeds that are considered actual “Pointer dogs.” They have quite a bit in common, but they have their differences, too. If you’re interested in potentially bringing one of these pups home to your family, read on to learn which might be the best fit for you.

The 5 Types of Pointer Dog Breeds:

Typically, when people talk about Pointers, this is the breed they’re referring to. The reason they’re called “English” Pointers is because their ancestry dates back to England in the 17th century (well, that, and because they bark with a British accent). Weighing anywhere from 45-75 pounds, they’re thought to be a combination of Greyhounds, Foxhounds, Bloodhounds, and Bull Terriers.

Bred for hunting, these dogs are versatile in the field, so much so that they’re often simply referred to as “bird dogs.” Besides pointing, they’re experts at retrieving and “honoring,” which means one dog won’t walk in front of another while it’s in a pointing stance.

If you’re just interested in having one as a pet, though, you’ll find that they’re usually non-aggressive, which makes them good roommates for children and cats. They tend to be a healthy breed, but they will demand regular exercise, so don’t expect them to sit and read books with you on the couch all day long.

These are svelte, lanky animals, with a long coat that’s speckled in what’s known as a “Belton” pattern. Their hair is silky and feathers at the tail and legs, and the coat they have as puppies is often a poor indicator of how they’ll look as adults. Their coats also hide surprisingly formidable bodies, as the average dog checks in at 65 to 80 pounds.

While they’re technically considered pointing dogs, they don’t really point — they “set” (hence the name). This means they freeze in place upon spotting their prey, often in a standing or crouched position. They’re typically used to find a covey of birds, at which point they set; then, upon receiving a command from their owners, they’ll give chase, sending the birds into the air so the hunter can get a shot off.

When kept as pets, they tend to be highly trainable and eager to please. However, certain individuals can be stubborn and strong-willed, requiring extensive training and exercise. They’re also fairly sensitive creatures, so positive reinforcement is usually much more effective than scolding or punishing.

If English Setters originated in England, where do you think Irish Setters come from? If you said Japan, you need to work on your context clues. These dogs started off as regular English Setters, but by 1845, people began to recognize that the Setters from Ireland tended to have red or chestnut coats. They were soon recognized as their own distinct breed, and tend to be a little smaller than their British cousins.

They perform as well in the field as other Setters and tend to enjoy being put to work, so don’t expect to have a lazy bum lounging around the house. They’re also incredibly friendly, which is why they’re often used as therapy dogs. However, that tends to make them less suitable for guard duty.

That friendliness can sometimes lead to over-excitement, though, so they’re not ideal for homes with cats or other small pets, and they may be a little too enthusiastic for small children. You can also expect them to destroy something if you leave them alone all day, so only adopt one if you’re willing to spend a lot of time with it.

These actually predate regular Irish Setters, but they weren’t really considered a distinct breed until the completely-red Setters became all the rage in the mid-19th century. Their auburn cousins became so popular, in fact, that Irish Red and White Setters almost went extinct; it took the efforts of a few dedicated breeders to keep the line active.

They’re still less popular than Irish Setters, and they’re primarily used as working dogs rather than kept as pets. That’s a shame, though, as they’re loyal and affectionate animals, and make outstanding companions for active families. They pair well with other dogs and are great with kids, but they’re probably not the best choice for apartment-dwellers.

They’re medium-sized animals, weighing in at 35-60 pounds. Their coats are gorgeous, but like any beautiful hairdo, they require regular maintenance, so expect to brush them thoroughly several times a week. Baths will also be needed every 6-8 weeks or so (and that’s good advice for you, too, come to think of it).

We now round out our tour of the United Kingdom with a stop in Scotland, where these black-and-tan pooches originated in the 19th century. These are the biggest of the Pointer breeds, weighing up to 80 pounds (so think twice before making fun of their kilts). Be careful when feeding them, though, as they can be vulnerable to bloat.

The breed had an early champion in Alexander Gordon, the Fourth Duke of Gordon. He was a huge fan of the dogs, and founded several kennels devoted to breeding them. The breed would eventually take his name — luckily, he was able to get it back after an extended chase (sorry).

Gordon Setters make great pets, but they tend to be loyal to a fault, so early socialization is a must to avoid behavioral problems. They’re very energetic and love to play, and they mature slowly, so expect to have a puppy on your hands until it turns three or four. Be careful letting them off-leash as well, as they tend to ignore the world around them once they find a scent trail.

Pointers make great pets and companions, regardless of which breed you ultimately decide on. There are other types of breeds that do pointing and are well known for hunting, though they aren’t technically of the Pointer or Setter variety. Remember that they’re bred to be working dogs, though, so be prepared for a lot of long walks and vigorous exercise. However, if you keep them stimulated and occupied, you should find yourself with a sweet, loyal pup that thinks you hung the moon.

Oh, and with a Pointer by your side, you’ll never lose a game of hide-and-seek again.

When Do German Shepherds Go Into Heat? (and Signs to Look for)

Do German Shepherds Get Along With Chickens? Do They Attack Them?