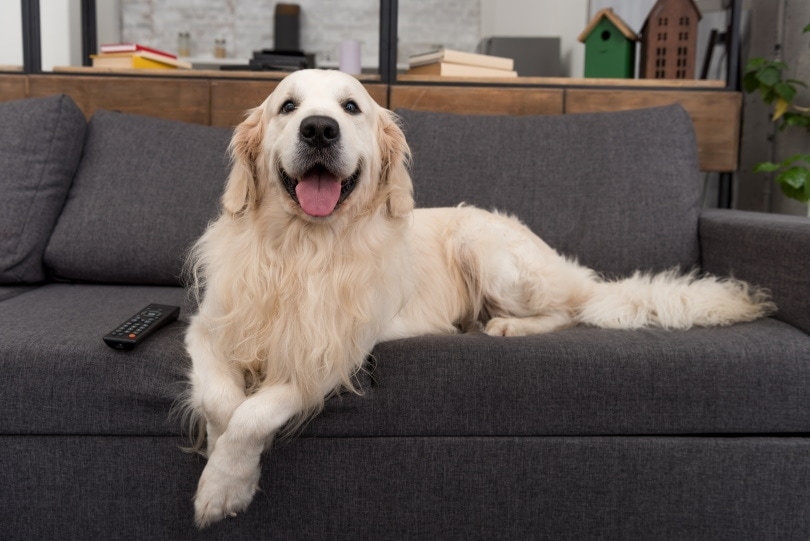 If you’re looking for a new canine companion, there’s an excellent chance you’ve considered a dog from one of the retriever breeds. There’s good reason for this, too, as retriever dogs are smart, sweet, and trainable; seriously, they’ll go get stuff for you and then bring it back to you — what more could you ask for?

But did you know that, while there are many different dog breeds that have retriever tendencies, there are only six recognized types of retrievers? Chances are you’re familiar with the Labrador and Golden varieties, but there are a few other breed options out there that are worth considering. The list below will cover all six breeds, including their defining characteristics, physical traits, and more, so all you have to do is decide which one to bring home to your family.

The 6 Types of Retriever Dog Breeds

According to the American Kennel Club, the Labrador is the most popular dog  breed in the United States. What’s the appeal? Well, it probably has something to do with the fact that they’re incredibly friendly pups, making them the perfect addition to any family, even one with small children running around.

Labradors come in three different coat styles: black, yellow, or chocolate. When fully grown, they can weigh anywhere from 55 to 80 pounds, and they love to play.

Please note that we said they love to play. Playtime isn’t an optional activity for these dogs. They can spend hours chasing after flung balls or thrown sticks, and they’re more than happy to stick by your side on a hike or jog. Who knows? They may even inspire you to get more active; after all, how could you say no to that face?

We think that part of the reason why Labradors are so doggedly friendly (see what we did there?) is  because they know that Golden Retrievers are breathing down their necks in terms of popularity. These dogs are the third most popular in the U.S., and you’re just as likely to find them working with your local search-and-rescue team as you are to see them lounging at the park.

They’re medium-sized when fully grown, weighing in at between 55 and 75 pounds, and they’re among the most energetic dogs on the planet. Luckily, they’re eager to learn and easy to train, which is why you often see them working as service animals.

Goldens are absolutely fanatical about water, and they love to chase birds, so hold on to that leash extra-tightly when walking past a river or lake. Otherwise, you may just find yourself going for an unexpected dip.

A very close cousin to the Labrador, the Flat-Coated Retriever is a relatively new breed. They get their names from their flat-lying coats that taper out at their legs and tail, and they’re faithful companions for hunters and other outdoorsy types.

Seriously, though, you’ll want to take this dog outside — they’re insanely energetic. If you don’t provide them with a ton of exercise and mental stimulation, they’ll go crazy (and take you along for the ride).  They typically weigh around 60 or 70 pounds, so you can imagine the destruction they can cause if they get bored.

It’s hard to stay mad at them, though, as they’re some of the happiest pooches around. Their tails never seem to stop wagging, and they like nothing more than to spend time with their human family — except maybe grabbing ducks out of a nearby pond.

If you said that Curly-Coated Retrievers are bigger than their Flat-Coated cousins…well…you’re technically correct, but that’s not the answer we were looking for. Curlies are the biggest of the retriever breeds, and they can weigh in at up to 95 pounds. However, their primary distinguishing characteristic is their thick, curly coat, which allows them to chase fowl through brambles and other rough terrain without suffering damage along the way.

Curly-Coated Retrievers are friendly, but they’re not quite as extroverted as the breeds above. They’re fiercely loyal to their families, but they can sometimes be aloof to strangers. They also tend to be calmer than many other retrievers, at least when they’re not working. After all, you don’t want to be too active when you spent all morning getting your curls just right.

Developed in 19th century Maryland by hunters and fishermen with a penchant for coming up with creative names for dog breeds, the Chesapeake Bay Retriever is a working dog through-and-through. They’ve been used for everything from fetching fallen ducks to pulling fishing nets — and sometimes fishermen — out of the water.

Their double-coats are neither flat nor curly, instead settling somewhere in the middle. The wavy fur is slick and oily to the touch, which helps repel water and allows the dogs to swim in icy conditions. They come in all shades of brown, as well as tints of red and yellow. Ranging from 55 to 80 pounds, these are solid, well-built creatures.

Like Curly-Coated Retrievers, Chessies prefer the company of their families to outsiders. They’re not aggressive by any means, but neither are they enthusiastic to meet strangers. This makes them excellent watchdogs, as well as reliable babysitters.

Don’t let the long name fool you — these are actually the smallest dogs in the retriever group, as they normally only weigh between 35 and 50 pounds. Despite their diminutive stature, they have big-dog energy, and can run circles around most other breeds (especially in the water, as they have webbed feet and a double coat).

The Nova Scotia Duck Tolling Retrievers somewhat resemble miniature Golden Retrievers, and they attract ducks and geese by “tolling.” This involves tossing a ball or stick around near the water, which causes the birds to come in for a closer look at the strange activity, allowing a hunter to get a shot off at close range.

The dogs won’t snicker at you if you miss, but they will make another unsettling sound. These retrievers have a high-pitched bark that sounds more like a scream, which we’re sure is just what you want to hear after firing a shotgun.

Which Retriever is Right for You?

If you’re considering getting a dog for your family, you can’t really go wrong with any of the retriever breeds.  They’re friendly, energetic, and completely loyal to their owners. Just keep in mind that these are dogs that were bred for a specific purpose, so be sure you can give them the exercise and stimulation they need, especially if you’re not going to be taking them hunting.

Then again, maybe you can give them all the stimulation they need by teaching them to fetch the remote.