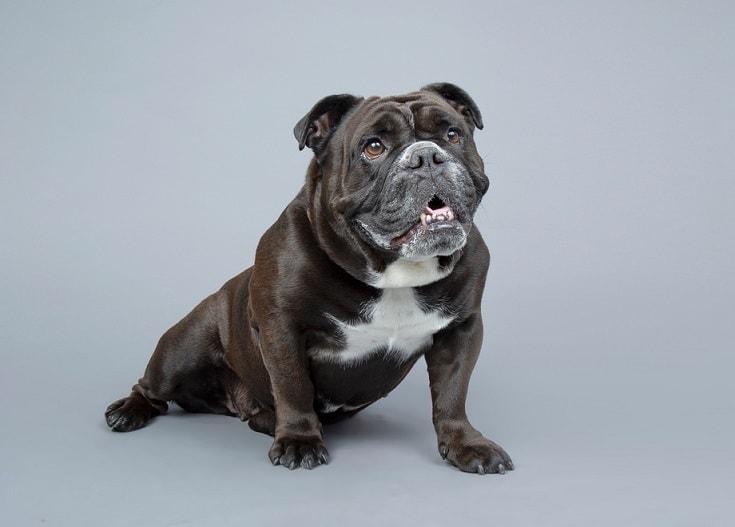 The Victorian Bulldog is often confused with the English Bulldog. They are similar and have somewhat of a shared lineage. However, there are differences between the two in both size and personality. English Bulldogs have become the more popular of the two.

The primary difference between these two Bulldogs is that the Victorian is larger. They are typically heavier and slightly taller than their stocky English cousins and have longer faces.

The Victorian is a muscular dog that is quite athletic. They are stout with wide nostrils and loose-hanging skin typical of the Bulldog family. They stand proud and robust, with a broad chest and muscular shoulders.

Victorian Bulldog Puppies —Before You Buy…

A post shared by Happiness is Pets Schererville (@hipschererville)

A Victorian Bulldog can cost between $1,500 and $3,000 in the U.S. on average. They can cost up to $5,000 if you are purchasing your puppy from a highly reputable seller and if their parents have a quality pedigree.

They are expensive, especially when comparing their cost to that of adopting an English Bulldog, because of their rarity. They are not a common dog, particularly in the U.S., so finding a breeder who keeps them purebred is challenging.

When you investigate a breeder, make sure they treat their pups well and follow proper convention and best practices while rearing them. Whether they are at home or in a larger facility, they should always follow the guidelines when breeding dogs.

It is essential to hold them to a high standard of treatment and check their considerations for yourself. You should request to get a visit through their breeding facility. They should always be happy to take you throughout each zone where the dogs are permitted.

Before selecting your new Victorian Bulldog, request to view any of the parents’ confirmation and registration papers. The breeder should likewise be happy to show you their veterinary records so you can know about any potential diseases that can be inherited.

3 Little-Known Facts About the Victorian Bulldog

1. The Victorian Bulldog is a result of the resurrection breeding movement.

The Victorian Bulldog is a breed that was never strictly named when they were first around in the 1800s. It is thought that the Victorian Bulldog that we have today is what the original dogs that were used for bull-baiting were like. Many different breeds were involved in the sport, but they were often bred together to bring forth the dogs’ best characteristics.

Old English Bulldogs are now extinct but looked incredibly similar to Victorian Bulldogs. As time progressed, the Old English Bulldog was bred to have an even rounder head with shorter, slightly bowed legs, a short muzzle, and a significantly pronounced underbite. All these traits were to accentuate the ones that people already loved in the Bulldogs.

However, most of these characteristics led to debilitating illnesses and joint pains. Thus, the Bulldogs began to shift back to a more temperate version of their squatter, disjointed selves.

This lineage is where we get the English Bulldogs that we have today, and the old Bulldog breeds that were originally used have been lost to us for decades.

In the 1940s, a movement began in Europe and North America that involved breeding modern dogs to reattain breeds lost to us. In 1985, the same goal was undertaken by Kenn Mollett to recreate the older version of the Bulldog.

He used elite breeds like the English Bulldog and the Staffordshire Bull Terrier and only those exclusively registered with the U.K. Kennel Club. He accomplished the task, creating a breed genetically and physically similar to the dogs that would have been around in the days of old.

2. Victorian Bulldogs are even sweeter and more affectionate than most other Bull breeds.

Even though the original Bulldogs were used as bull baiters and fighting dogs, these aggressive tendencies have been mostly bred out of modern bull breeds.

Since Kenn Mollett only used modern breeds with excellent characters and lineages, the new and improved Victorian Bulldog has an incredible personality. They are an incredibly kind and affectionate dog that is known for having a gentle nature.

Even though Victorian Bulldogs are gentle pups, they are also extremely loyal. Combining these traits and their capacity to be trained quickly and thoroughly makes them an excellent choice if you need a guard dog or a watchdog.

A post shared by Tyson The Victorian Bulldog🥊👑. (@tyson_v.bulldog)

Temperament & Intelligence of the Victorian Bulldog

The Victorian Bulldog is a smart dog that inherited their intelligence from the original animals used to recreate the breed. They are relatively docile creatures and are full of the potential for love and slobbery kisses.

Getting to know your Bulldog is essential because they have extremely reliable personalities, meaning that they will stick to whatever kind of temperament they have and not change dramatically throughout their lives or during decision-making moments.

The Victorian Bulldog is an incredible choice as a family dog, especially if your children are slightly older. These dogs have plenty of patience and love to give and do not require much time for exercise, only for attention and cuddles.

They are quite slobbery, so you will need to prepare your home for that. Watch out for puddles, particularly in the area around their food and water bowls.

Although it is always important to socialize young dogs, Victorian Bulldogs are naturally quite social animals. They tend to behave well around other dogs and even other cats. They don’t have a high prey drive either.

Your dog will often be wary of strangers until they know that they are safe. It is often recommended to teach your dog a command or a sign to show that the new person you are with is safe to be around and that they can relax.

Things to Know When Owning a Victorian Bulldog

Victorian Bulldogs can struggle quite a bit with their weight and should have a carefully managed diet by their owner. They should not eat all their food in one go, but instead, it should be spaced out into at least two meals a day.

Dogs with broader chests like that of a Bulldog can struggle with bloating, a serious health condition furthered by indigestion. The way that their mouths are formed can also make eating quite difficult, so find a kibble that is well-suited to their mouth shape.

Feed your Victorian Bulldog between 2 and 3 cups of food each day, depending on their age and level of activity. Oversee their consumption, and don’t feed them a diet that is high in fat.

Victorian Bulldogs are similar to English Bulldogs in that they would rather be lazy and lounge around for most of the day. The Victorian Bulldog has a lengthened muzzle and slightly longer legs than an English Bulldog. That makes a difference because the latter often struggles with arduous amounts of activity, whereas a Victorian can handle longer walks or more intense activity.

Still, Victorian Bulldogs are low-energy dogs. Try to take them on at least one daily walk or give them about 45 minutes of activity sprinkled throughout the day. Aim to hit 7 miles each week on your walks to ensure that they are getting enough exercise.

Victorian Bulldogs have an extremely loyal temperament and are quite intelligent. These characteristics add up to make this dog perform well during obedience training. They can learn new ideas quickly.

The only essential factor to keep in mind with the Victorian Bulldog is that they do not respond well to any kind of aggressiveness. Do not play top dog with them or attempt to assert your dominance. Instead, use positive reinforcement and plenty of vocal praise to encourage them to remember and practice tricks.

Grooming the Victorian Bulldog is one of the most convenient parts of their overall care. They only need to be brushed a few times a week with a slicker brush to keep them from shedding as much. However, they require more baths than an average dog because they can develop more of a doggy odor.

Bathe your Victorian Bulldog about once a month to six weeks, washing and drying them thoroughly around their wrinkles. Use a gentle shampoo and moisturizer because they are quite prone to skin issues.

Beyond their coats, keep their nails clipped every month with a nail clipper and brush their teeth daily. They need special attention paid to their dental hygiene because of their jaw formation and how food can get stuck.

The Victorian Bulldog is quite a robust breed. Since the original dogs were bred with such selective care, they are much less prone to the many joint-related and genetic diseases extremely common to other Bulldogs. Be sensitive to their skin, and take care not to leave them outside in hot or cold weather. Maintain their veterinary appointments, and you should have a healthy dog for many years.

There are no noticeable differences between males and females in this breed.

The Victorian Bulldog is a very old breed that is simultaneously only 30 years old. Due to the resurrection movement, they were brought back and are more robust and healthier than the modern English Bulldog. They are also much rarer and thus a challenge to find. However, if you adopt one of these slobber, sweet-natured dogs, be prepared for a loyal companion for many years.