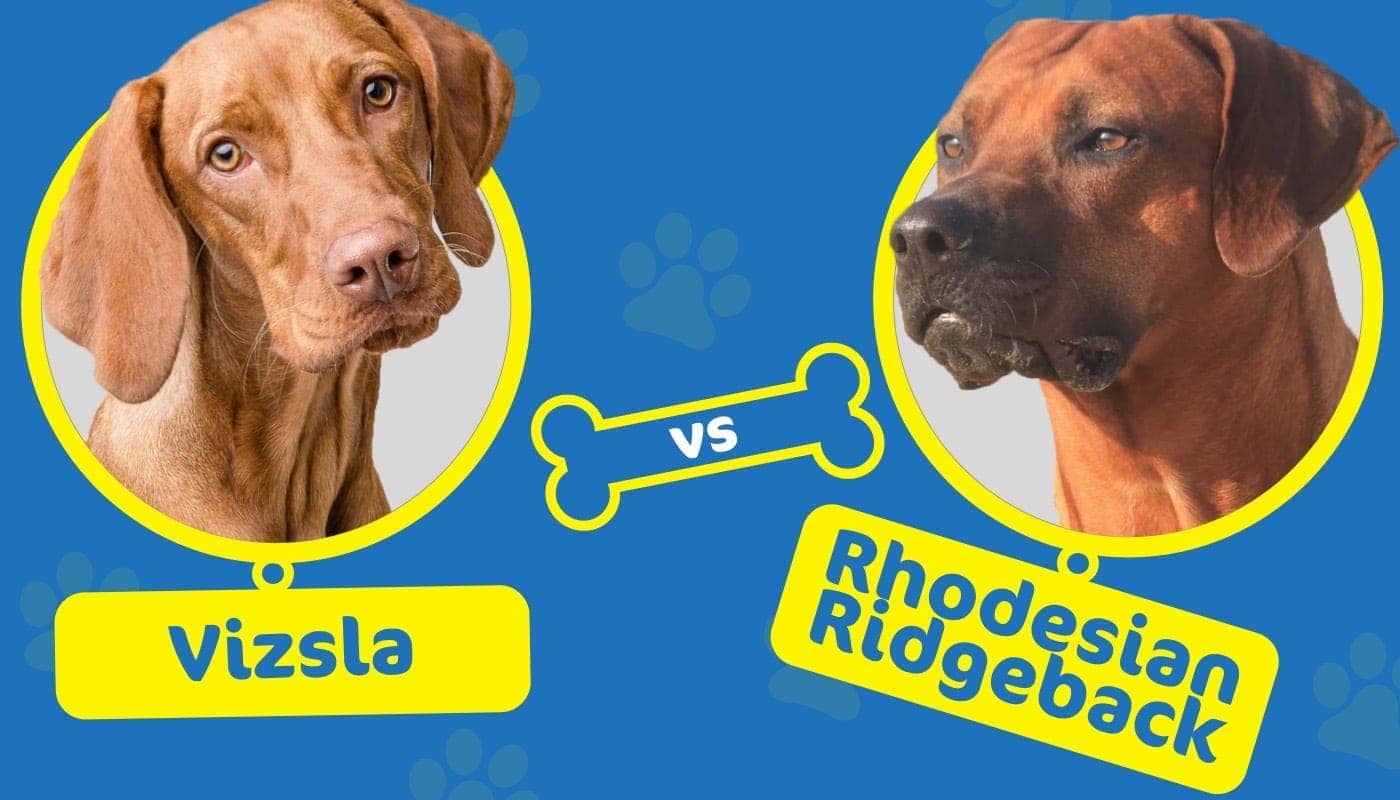 The Vizsla and the Rhodesian Ridgeback are both beautiful, short-haired dogs that were both bred for hunting and endurance. They have amazing stamina and agility and have both been a favorite breed as running partners. These dogs may look similar, but their unique personalities and temperaments are what set them apart.

In this article, we’ll take a deeper look into each breed and investigate what makes them different.

These dogs may appear similar to the untrained eye, but there are distinct visual differences between the two. Firstly, Ridgebacks are larger, taller, and more powerful than Vizslas and have a distinctive ridge of opposite-facing hair running down the length of their back, giving them their name. Ridgebacks also have longer tails, darker facial markings, and black noses, whereas Vizslas have brown or red noses. They are both solid in color, typically brown or rusty red all over their coats.

Vizslas were originally bred in Hungary as a pointing and retrieving dog for hunters and were famously used during World War 1 to deliver messages to soldiers. They were used mainly for pointing out and hunting small game like pheasant and partridge, earning them the nickname, “Hungarian Pointer.” The breed almost went extinct after the first and second world wars but was brought back from the brink by a few dedicated breeders and finally made its way to the U.S. in the early 1950s. These days, they are a popular working animal and are often used in search-and-rescue operations and as loyal companion animals.

Vizslas are lively and athletic dogs that love to run, but when not working, they are affectionate and loyal companion animals to their families. These dogs become extremely attached to their owners and have a strong desire to be around people. They will suffer from separation anxiety if left alone for long periods. They have a history of working closely with humans, and this has led to them being known as Velcro animals today — they are known to seldom leave their owner’s side, and they crave their owner’s attention. If you are away from home frequently, the Vizsla’s clingy character may become an issue.

Vizslas were bred to work closely with humans and are thus accustomed to training and naturally want to please their owners. They are a breeze to train and will pick up commands in no time. That being said, it is important to be consistent, calm, and kind with these dogs because they do not respond well to harsh reprimands or training methods. If you use positive reinforcement methods and make training sessions an enjoyable experience, you’ll have no problem training these naturally obedient dogs.

The Vizsla needs a great deal of off-leash exercise due to their ancestry of running and tracking during hunts. Luckily, with good training, this is easily possible, and they will stay close to you and by your side most of the time. They will need a minimum of 2 hours a day of exercise, as they were bred for tracking, and a 10-minute stroll around the block will just not suit them! The Vizsla is one of the fastest dogs on the planet and can reach speeds nearing those of Greyhounds and Salukis.

Vizslas are healthy dogs in general, but due to their large size and active nature, they are prone to a few issues, including hip and elbow dysplasia, progressive retinal atrophy, and epilepsy. Overall, Vizslas are a healthy breed that has a slightly longer life expectancy than Ridgebacks.

These are large dogs with a ton of energy and will benefit greatly from a diet high in animal-based protein. A protein-rich, good-quality dry kibble is great, and they’ll need around 2-3 cups a day divided into two meals. Grooming a Vizsla is an easy affair with their short and coarse coats, and they will need brushing only occasionally to remove any dead hair.

Vizslas are great family animals, but be sure to keep an eye out around small children because they can easily mistakenly knock them over while playing. They are a great choice for athletic owners and are a favored breed by long-distance runners due to their exceptional stamina. They are an ideal choice for owners on farms or with large yards but are not suited for apartment living.

Related Read: How Much Does a Vizsla Cost?

Rhodesian Ridgebacks were originally bred in South Africa but mainly developed in Zimbabwe, once known as Rhodesia. They were developed as hardy and capable hunters and loyal and courageous guard dogs and could withstand the harsh temperatures of the African bush. The Ridgeback is also known as the “African Lion Hound” and was often used by farmers to hunt big game, including lions! Today, these capable hunters are more commonly kept as companion animals.

Rhodesian Ridgebacks are intelligent and affectionate dogs, yet they are known for their stubborn and independent nature. They are great family dogs because they are exceedingly loyal and make good guard dogs, while rarely showing aggression toward humans. That said, they are fairly reserved around strangers initially, but they soon warm up to familiar faces. These dogs have a long history of hunting and have a powerful prey drive. They will need early socialization and training to keep them from chasing cats and other small pets, as well as a well-fenced yard to prevent them from going out hunting.

Rhodesian Ridgebacks can be a challenge to train due to their independent nature and somewhat stubborn personality. This means they are not well suited for novice dog owners because they can be quite a handful, and the Vizsla may be the better option. With a great deal of patience, consistency, and strict routine, Ridgebacks can be well trained to follow commands, but it can take some time. Their high prey drive also poses a challenge, and it is vital to socialize and begin training these dogs as early as possible.

While Ridgebacks, like all dogs, need daily exercise, they do not have huge amounts of energy, and an hour a day is good enough for them. While they were often used for hunting, they also spent a large amount of their time laying around the home as guard dogs, so they don’t have as high a need for exercise as the Vizsla. That said, these dogs are prone to barking constantly if they get bored, so daily exercise is a must.

Rhodesian Ridgebacks do not suffer from any serious hereditary conditions, but they are prone to issues that are common with large breeds, including hip and elbow dysplasia, hypothyroidism, and dermoid sinus.

Ridgebacks are large and powerful dogs but are not overly active or energetic. They’ll need around 2-4 cups of high-quality dry kibble per day, depending on their size and activity levels. Ridgebacks are highly food motivated and are known for jumping up on counters and tabletops seeking out scraps. For this reason, we advise against free-feeding them, as they can quickly become overweight. They are also quick eaters and can be susceptible to bloat and gas, and we recommend dividing their meals into two.

Ridgebacks do not have any special grooming needs, and their short, coarse coat is easy to keep maintained. Brushing once a week or so is plenty to get rid of any dead hair, and as they are not prone to getting any “dog odor,” a rinse with clean water is fine when they get dirty.

Rhodesian Ridgebacks are a challenge to train and large in size, so we advise against this breed for novice owners. That said, they are great family dogs that are loving and affectionate with their family and make great guard dogs. Remember that they have a strong prey drive and will need adequate socialization to get along with the family cat. They need a large yard to play in and are not suitable for apartment living.

Related Read: How Much Does a Rhodesian Ridgeback Cost? (2021 Price Guide)

Rhodesian Ridgeback vs Vizsla: What Are the Differences?

Both the Vizsla and Ridgeback are similar in size and appearance, and both are loyal and affectionate with their families. Vizslas are clingy dogs that need to be around their owners constantly and do not enjoy being left alone, so the independent Ridgeback may be a better choice if you are away from home frequently.

The Vizsla is easier to train and smaller in size than a Ridgeback, so they are better suited for novice owners, whereas Ridgebacks are fairly stubborn and independently minded and can be a challenge to train, making them better suited for experienced owners.  If you have other small pets in your home, Vizslas are more likely to get along with them, but the strong prey drive of Ridgebacks can be difficult to tame.