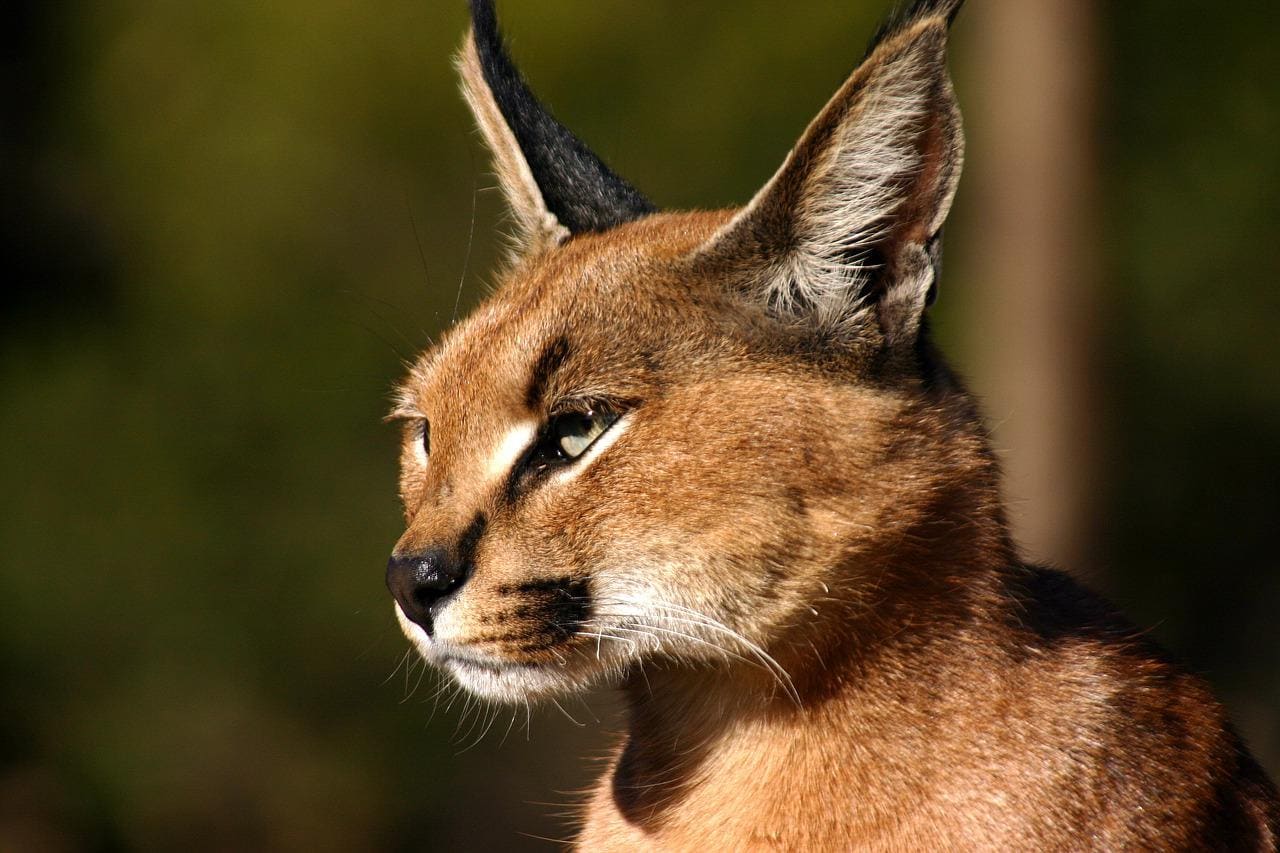 Hecker is a popular character in the Beluga Cinematic Universe on Discord. Hecker’s chat meme depicts a cat with long, pointed ears, and Hecker’s fans have wondered which breed inspired the character’s meme. Hecker is a caracal cat.

Caracals are elusive predators native to southern and northern African regions, India, and arid areas in Pakistan. Unlike larger cats like lions, caracals do not roar but vocalize with hisses and loud barks. They’re remarkable felines, but their numbers are decreasing due to habitat loss and poaching.

We’ll discuss what makes the caracal unique and how it has inspired entrepreneurs to create memes, T-shirts, and video skits.

Although caracals have been compared to servals because of their similar body size, caracals do not hunt in humid regions like servals. Caracals prefer living and hunting in harsher terrain in dry woodlands, semi-deserts, dry mountains, and savanna. Caracals sometimes have immense ranges when food sources are limited, and populations of the cats are spread widely over the Middle East and Africa. Although they were once abundant in India, their numbers are declining due to hunting and land development projects.

Caracals are considered pests in parts of India and Africa because they’re a threat to livestock. Caracals have killed livestock, but conservationists believe the cats are not as threatening to cattle and sheep as some farmers believe. The caracal’s bad reputation among farmers has caused several to be shot when they approach farmland. They’re endangered in most countries, but they’re teetering on extinction in India.

Caracals rest during the day and escape to caves or crevices to stay away from the afternoon heat, and they hunt at night and in the early morning. They have a similar hunting range to cheetahs in Africa, but the caracal’s hunting style does not involve high-speed chases like the world’s fastest cat. Caracals are exceptional leapers and climbs that can jump 10 feet vertically.

Like a housecat, the caracal uses a stealthy approach followed by a leaping attack. The athletic felines have been known to attack up to a dozen birds by leaping into the air when they take flight and knocking them down with their paws. They’re typically opportunistic predators who enjoy a varied diet that includes rodents, monkeys, hyraxes, mongooses, dik-diks (dwarf antelopes), gazelles, and impalas. They survive primarily on the smaller mammals but sometimes can tackle gazelles and larger livestock. Like most wild cats, caracals hunt alone and only seek company when they’re ready to mate.

After killing their prey, some caracals will hide the carcass in trees or cover it with grass so they can return later for another snack. Caracals, like cheetahs, were once trained to hunt for humans. In Iran and India, the cats were part of a cruel bird-killing sport performed in arenas. A flock of pigeons was tossed in the ring beside the caracals, and gamblers would bet on how many birds the cats could kill.

Caracals are sometimes called “desert lynxes,” but they have little in common with true lynxes. The cat’s lineage is not entirely clear, but most biologists believe the caracal is related to the serval and golden cat. Males can weigh up to 44 pounds, and the smaller females do not exceed 35 pounds. Caracals have gorgeous golden coats, long legs, unique facial markings, and prominent ears with long black hairs on the exterior side. In Turkish, the caracal is defined as “black ears.”

Caracals move their ear tufts in several directions, and the purpose of the strange hairs continues to spark debate. Some theorized that the black tuffs keep flies away, but the most accepted theory is that caracals use their ear tassels to communicate with their species. Caracals have large claws that they sharpen on tree trunks, but the behavior may also be used to signal other cats to stay away. They have scent glands between their toes and on their face to mark their territory while scratching the tree.

Several centuries ago, humans respected caracals because of their agility and hunting skills. The cats hunted foxes, birds, and antelopes for their caretakers. The saying, “put a cat amongst the pigeons,” originated from the arena battles in India and Iran. Modern-day caracals are not as lucky as their ancestors. Since they’re capable of killing farm animals, caracals are despised by farmers in Namibia and other regions in southern Africa.

The exact numbers of caracal populations are unknown, but most believe their numbers are declining in every country. According to the Indian newspaper, The Economic Times, the caracal’s habitat has decreased considerably since the mid-20th century. In 2020, the caracal’s habitat accounted for only 5% of the land it occupied in 1948. Caracals prefer staying away from humans, and they’re difficult to spot in the wild because of their elusive behavior. Although they do not pose threats to humans, their population will continue to sink until more countries employ conservation efforts to protect them.

In some regions uninhabited by larger cats, the caracal is the apex predator. Killing the animals at the top of the food chain can have devastating ecological consequences. When smaller animals are not hunted, their populations can increase too quickly and disrupt the region’s other resources and prey animals.

Although there are no reports of caracals killing humans, exotic cats are not designed to live in captivity. They’re accustomed to traveling several miles to find food, and their home ranges can encompass 200 miles or more. Every state has different exotic pet laws, but even the states that allow wild cat imports require permits and sturdy enclosures that can cost several thousand dollars. Exotic pets are not cheap, but the food costs, vet bills, and security measures are not practical for most cat lovers.

In Royal Oak, Michigan, a resident who owned four caracals was ordered by the police to find the cats a new home after one or more escaped in October 2021. A neighbor reported seeing one of the cats wandering outside an elementary school. No one was injured, and the cats were caught with the owner’s help. The police claimed that the cats had escaped before, and they decided to enact a local ordinance banning the breed. It’s sad when someone must give their pets, but large cats are happier roaming the savannas of Africa than sulking in a metal enclosure in the middle of suburbia.

Although the caracal is not as well known to the general public as other exotic cats, more people are becoming aware of the incredible creature through social media platforms, Discord chat rooms, and online videos. Hecker the cat is a digital character who enjoys hacking his friends and enemies, and his personality has little in common with the actual desert cat unless you consider hacking a form of hunting. However, the creator of Hecker was clever in picking a rare species to represent his character and bring awareness to an endangered feline.

Are Ladybugs Poisonous to Cats? Keeping Your Cat Safe

Are There Wild Cats in Wisconsin?