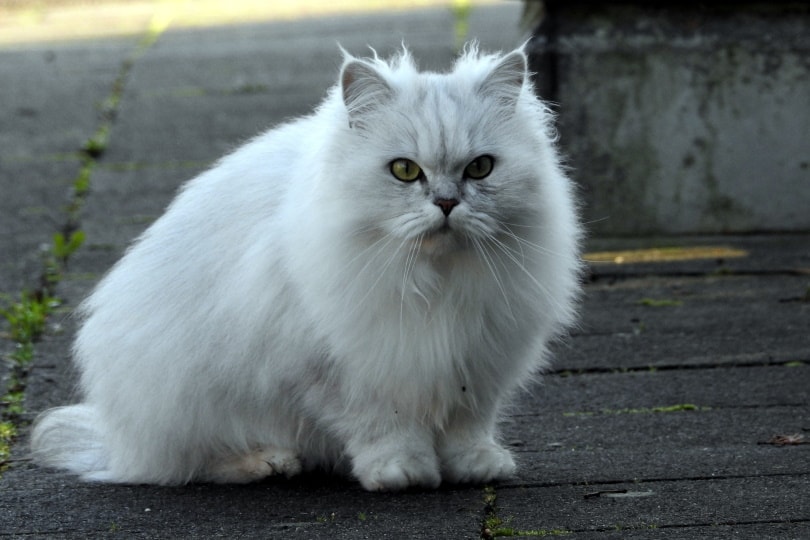 The Earliest Records of White Persian Cats in History

Persian cats, as they are now, have been around for hundreds of years. Not much is known about the breed’s origin, though it’s well-known how they ended up in Europe. The breed’s name is an homage to its homeland, which is thought to be Persia or modern-day Iran. When the breed first began is unknown, but somehow, early specimens were exported from Persia.

In the early 1600s, an Italian traveler brought some of these early Persian cats to Europe. His name was Pietro Della Valle, and he’s commonly credited with the breed’s introduction to the western world, though other travelers also brought Persian cats to Europe at other times. So many of them ended up in France, in fact, that for a time, they were referred to as French cats, rather than Persians as we know them today.

Once white Persian cats made it to Europe, it wasn’t too long before they exploded in popularity. During the Victorian era, they were favored by nobles and royalty. Queen Victoria even owned Persian cats, ensuring the breed would be beloved by many. Though already popular in Europe during the 1700s, Persian cats wouldn’t make it to America until the late 19th century.

America loved the breed immediately, and they instantly rose into prominence, becoming the most popular breed in just a short time. Since then, they’ve made appearances in movies and have been owned by some very famous individuals such as Florence Nightingale and Marilyn Monroe, the latter of whom kept a white Persian cat by the name of Mitsou.

Persian cats helped usher in an era of cat shows. They had become so wildly popular that when registries or shows were held anywhere in the western world, their success was largely due to Persian cats. Persians had the most entries in these shows, and they also drew the largest crowds, amassing spectators from all over.

In 1906, the Cat Fanciers Association was formed, following unsuccessful attempts of several other registries, and Persians were among the first breeds recognized by the newly-formed association. Persian cats are also recognized by all major feline registration organizations, including The International Cat Association (TICA) and The Federation Internationale Feline (FIFe).

1. A Persian Won “Best in Show” in the World’s First Cat Show

In 1871, the world’s very first recorded cat show took place at the Crystal Palace in London. At this show, the Persian breed was showcased, along with Siamese cats, Manxes, Scottish Wild Cats, and more. An amazing 20,000 people flocked to the show to witness a Persian kitten winning the “Best in Show” award.

2. Not All Persians Are Brachycephalic

Today, the smushed, flat faces of Persian cats are one of the defining features of the breed. These cats are brachycephalic, and sometimes, it can cause problems, including respiratory issues, runny eyes, and more. But Persians weren’t always brachycephalic cats, and even now, many of them aren’t. Flat-faced Persians can be traced back to a single litter of kittens born in the 1950s with a genetic mutation that breeders decided to favor.

3. A Persian Is the Subject of the World’s Largest Cat Painting

Several prominent paintings featuring Persian cats have sold for exorbitant sums over the years, but perhaps none is as special as one titled “My Wife’s Lovers.” This painting’s dimensions are 6’ x 8.5’, making it the largest painting of a cat in the world. It last sold for $820,000.

Related Read: How to Tell If Your Cat Is Persian (8 Different Methods)

One of the main reasons that white Persian cats are such popular pets is that they’re an excellent companion breed. These are loving, affectionate cats that are very low-key. You won’t find Persian cats running around and being crazy. They’re low-energy felines that prefer to spend their time lounging on the couch or curled up in your lap. All of this helps to make Persian cats the most popular pure breed in North America.

For the most part, Persian cats are relatively low-maintenance pets. They don’t require too much other than attention and food. Persian cats need very little exercise since they’re such low-energy animals. However, they do have extensive grooming requirements, thanks to their long, luscious coats. Their coats are incredibly beautiful, but you’ll have to brush it out every day if you want it to keep looking good. Persian cats also shed quite a bit, so you can expect to have plenty of cat hair to clean up around the house!

Persian cats are one of the oldest and most well-known of any domestic cat breed. They’re the most popular feline pets in North America for a variety of reasons, including their beautiful appearance and easy-going temperament. A Persian kitten even won “Best in Show” at the world’s first cat show, proving that the breed has been popular for quite some time.

Applehead Siamese vs Siamese Cat: Pictures, Differences, & Which to Choose

Indoor vs. Outdoor Cats: Should Your Cat Be Free to Roam?