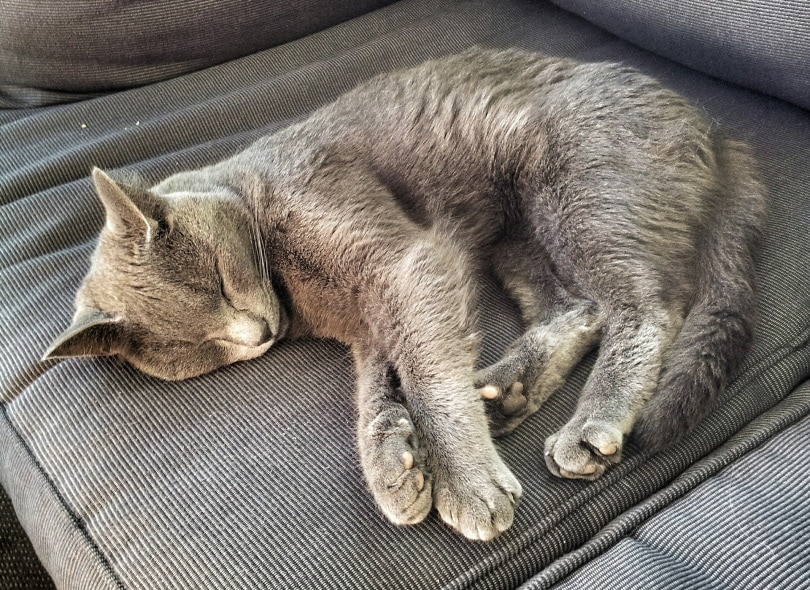 A sleeping cat is the picture of serenity. Unless of course, this peaceful image is interrupted by your cat snoring! While it certainly can be cute, you may wonder if it is normal for your cat to snore.

You may be asking, why does my cat snoreLet’s explore the most common reasons why a cat would snore.

An upper respiratory tract infection can also cause a clear or colored discharge from the nose or eyes. Other common signs include sneezing, conjunctivitis, mouth ulcers, fever, lack of appetite, and low energy.

Foreign bodies, such as blades of grass or grass seeds, can become lodged in a cat’s nose after being inhaled or vomited up after ingestion. This can cause an airflow obstruction and subsequent snoring. Common signs of nasal foreign bodies are sneezing, pawing at the face, snorting, gagging, repeated attempts at swallowing, and a nasal discharge from just one nostril.

3. Polyps and Other Growths

Inflammatory polyps are benign growths that occur most commonly in young cats less than 2 years of age. These polyps may grow within the nasal cavity and obstruct breathing. This may result in snoring along with other upper respiratory signs such as nasal discharge, sneezing, and difficulty breathing. Cats with nasal polyps may also paw at their ears and face, and shake their heads.

Nasal neoplasia or cancer is more common in older cats. These growths may damage surrounding tissues and obstruct airflow leading to noisy breathing and snoring. Affected cats may also have a nasal discharge, and show a lack of appetite and low energy. Some cats will develop facial deformities such as a bump over the bridge of the nose, as the tumor grows in size. Signs are often present for weeks or months. The most common nasal tumor in cats is lymphoma followed by adenocarcinoma and squamous cell carcinoma.

Snoring is common in brachycephalic or flat-faced breeds such as the Persian, Exotic Shorthair, and Himalayan. “Brachy” means shortened and “cephalic” means head, so the word brachycephalic quite literally means “shortened head”. The skulls of these cats are shortened in length compared to regular cats. This gives the face and nose a flattened appearance and alters the surrounding soft tissue structures. Their altered anatomy makes these breeds more likely to snore. While their flat faces are cute, some brachycephalic cats suffer from a condition called brachycephalic airway syndrome. Affected cats have abnormally narrowed openings of the nose, narrowed nasal passages, and an elongated soft palate, all of which result in breathing difficulties. Cats severely affected by this syndrome may require surgery to help with their breathing.

Overweight cats may snore due to fatty deposits in the tissues surrounding their upper airways. Pressure from these fatty deposits may partially obstruct the airways and cause snoring.

The negative side effects of excessive weight on a cat’s respiratory system may extend beyond snoring. Excess fat can also make it more difficult to inflate the lungs, which puts additional stress on the respiratory system. This is particularly dangerous during anesthesia.

In fact, there is a special name to describe this phenomenon — Pickwickian syndrome, or obesity hypoventilation syndrome. It is named after the character “Joe” in Charles Dickens’ 1837 novel “The Posthumous Papers of the Pickwick Club”. This obese character snored and repeatedly fell asleep during the day.

Cats are masters at curling up in tight spots. This may lead a cat to fall asleep in an awkward position and may result in snoring if the position of the head partially obstructs airflow. Once a cat changes positions, the snoring should stop.

Is It Normal That My Cat Snores?

To answer the question, why does my cat snore; snoring may be normal in some cats, and could just be a quirk unique to your cat. If your cat appears healthy, is not overweight, and has no other signs of respiratory disease, snoring is probably nothing to worry about. However, do mention it to your veterinarian during your cat’s biannual or annual wellness exam.

If your normally silent cat starts snoring or if snoring is accompanied by other symptoms such as sneezing, nasal discharge, changes in behavior, or a decrease in appetite or energy levels, you should contact your veterinarian as it may indicate that your cat is ill.

225 Funny Cat Names: Our Top Picks for Your Hilarious Cat

Is Calathea Toxic to Cats? Keeping Your Cat Safe