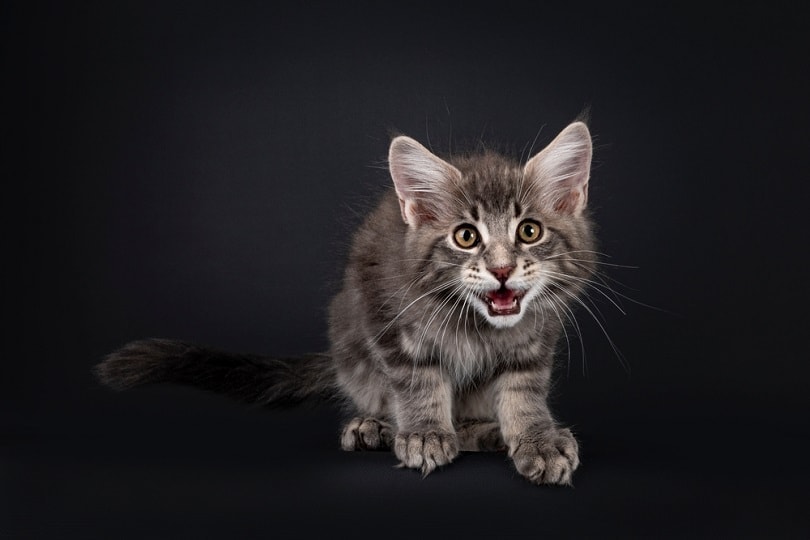 Many people love cats because they are relatively quiet creatures. You don’t have to worry about them waking up the baby or disturbing your next-door neighbors. Even though cats are quieter than dogs, they still primarily communicate through vocalizations, such as chirping.

Although experts are not quite sure why cats chirp, cats most likely chirp because they are excited. You are most likely to hear cats chirping whenever you first come home, whenever they are playing with their favorite toy, or looking out the window at birds.

Keep reading to learn more about why cats chirp and understand a side of cats that many people don’t recognize openly.

If you are reading this article, you likely researched cat chirping because your cat is making the sound itself. So, you probably know what it sounds like.

Just in case you don’t, chirps typically sound like a peep or trill. Many people compare a cat’s chirp to the sound of a song birds warble. Because of the similarity in sounds, there are some debates about whether this sound was developed to help lure birds to the cat.

Interestingly, chirps classify as a type of cat murmur, which is a type of sound formed with a mostly closed mouth. The most common form of murmur is purring. Murmur is a distinct type of sound cats make, with meowing and aggressive being the other two categories of cat vocalizations.

Why Do Cats Chirp?

Even though chirping may have developed as a hunting mechanism, most cats today chirp because of excitement. Domesticated cats especially chirp when they are excited to see their owner. When you first come home after a long trip, your cat may chirp at you to express its hellos.

In this way, chirping is a very interesting form of communication between cats and humans. One reason that cats make such great pets for humans is that they have been domesticated to communicate vocally. This makes it much easier for humans to provide care and attention that cats need.

Cats don’t just chirp to communicate hellos, though. They also chirp simply whenever they are excited. Young cats especially like chirping whenever they are looking out the window or playing with their favorite toys.

In this way, chirping still expresses a form of excitement, but it is not directed as a form of communication towards you. Instead, it expresses their hunting instincts.

Body Language To Look For While Your Cat Is Chirping

Whenever your cat is chirping, there are some body language cues to look out for as well. Most commonly, chirping is accompanied by bright eyes, blinking eyes, tail swishing, gentle head butting, and pointed ears. All of these body language cues reflect the cat’s excited mood.

What If My Cat Doesn’t Chirp?

If you have never heard your cat chirp before, don’t worry. Many cats never chirp in their lifetime, and it does not mean that they are bored or unsatisfied with life. Instead, cats can be perfectly happy, content, and excited without expressing a single chirp.

Other Signs Your Cat Is Excited

To make sure that your cat is happy and enthralled in playing experiences, you can look for other signs of excitement instead.

Here are the most common signs that your cat is excited and super happy:

If your cat shows any of the signs above when playing, seeing you, or looking out the window, it is completely content and excited to be alive. The lack of chirping doesn’t mean anything.

Other Sounds to Listen For

In addition to body cues, there are other sounds your cat may make when it is excited. One of the most common is repeated meows. If you hear your cat constantly meow back-to-back, it is often a sign of excitement.

Can I Make My Cat Chirp?

If you know that your cat is prone to chirping, there are ways that you can incite the sound. The easiest way to get your cat to repeat the sound is through hunting inspired toys and games. For example, get a toy with a feather at the end and lure your cat to chase the toy.

Whenever your cat has accessed its hunter instincts, the chirping may begin. This technique is not guaranteed to make your cat chirp, but it is the most likely. If your cat does not chirp, it does not mean it is not interested in playing. It just means it doesn’t want to chirp.

Chirping is a unique sound cats make that not everyone hears. Chirping expresses a form of excitement, but it is mostly heard whenever a cat is excited about playing or hunting, though cats sometimes chirp whenever you first walk in the house. If your cat doesn’t chirp, don’t be worried. Cats can live happy, excited, and thrilled lives without ever chirping.