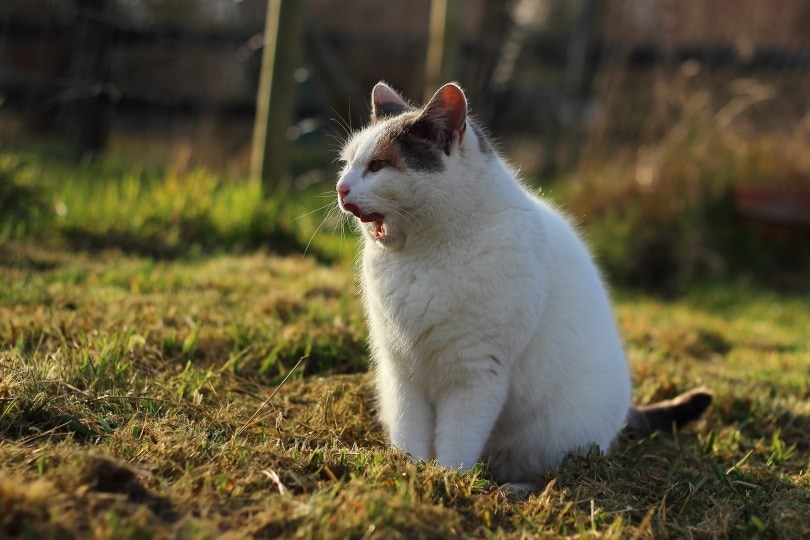 If you forget to crack open a can of cat food in time for your kitty’s breakfast one morning, chances are you’ll be on the receiving end of some pretty insistent meowing. While some cat breeds, like the Siamese, have well-earned reputations for being extra “talkative,” all cats meow at their owners at some point, some more loudly than others!

So why do cats meow? Meowing is used primarily to communicate with their owners. After they are grown, cats rarely meow to talk to each other, meaning meowing is a language reserved solely to speak to the humans in their lives. Read on to learn more about what your cat might be meowing to tell you and what to do if your cat is meowing just a little too much!

The Cat’s Meow: A Brief Overview

Newborn kittens use meowing as their main method of communicating with their mother. Their adorable, tiny mews let mom know if they are cold, hungry, or even sick. However, those kittens eventually outgrow both their mother’s milk and the meow as their primary feline language.

Adult cats rely on various methods to communicate among themselves. Most of them take a lot less effort and are considerably less noisy than meowing, like scent marking and body language. For this reason, cats no longer need to rely on meowing to talk, so long as they only speak to each other.

Once ancient cats decided to throw their lot in with humans, that all changed. Humans can’t smell well enough to decipher scent communication and aren’t the greatest at reading cat body language either. Because of this, cats went back to basics in their quest to communicate with their new human companions—meowing.

Meow Translation: What Is Your Cat Trying To Tell You?

OK, so now you know that your cat is meowing to communicate with you, but how do you know exactly what they’re saying? Until some creative soul invents a cat translation device, cat owners are on their own when it comes to determining what their cats are trying to tell them. Every cat is an individual, but here are some common reasons your cat might be meowing at you.

“Feed me!” is probably the most common message your cat is trying to convey by meowing. Unlike their ancient or wild cousins, your house cat isn’t going to be hunting for their own meals. They rely on you to keep their bowls and bellies full and if they feel like you’re falling down on the job, expect them to tell you about it!

When you wake up in the morning or come home from work, your cat may greet you by meowing. Yes, sometimes they might be hungry, but cats also meow as a way to say hello to their humans. If that meow of greeting leads to snacks or chin scratches, well, that’s just a bonus.

Your cat may meow to get you to pay attention to them, especially if you’re engrossed in some other activity like watching television, reading, or working at a computer. If your cat spends much of the day alone, they may be more likely to meow for attention once their humans do come home.

If your kitty spends time outside, they may meow to let you know they want to go out or come back into the house. Cat owners who decide to stop letting their cat go outside are likely in for some pretty tragic meowing at the door until the cat adjusts to their new reality. For their safety, it’s best that cats live indoors anyway so you can avoid dealing with this behavior by keeping your cat inside from the beginning.

This is one case where cats use meowing to communicate with each other as well as humans. Both male and female cats will meow and yowl as a way to signal they are in search of mates. Female cats in heat can be particularly noisy in search of males and also as a way to convince their owners to let them outside to find that special someone!

6. To Tell You Something’s Wrong

Cats may meow to communicate stress or fear, perhaps at the arrival of a new baby or a strange new cat in the neighborhood.

In some cases, there could be a medical explanation for your cat’s meowing. For example, older cats can develop confusion and behavioral changes, similar to Alzheimer’s in humans, and meow at random and inappropriate times.

Cats may also meow or yowl when they are in pain. Pay particular attention to this behavior if you have a male cat and the meowing is accompanied by the cat straining to urinate. Male cats can become “blocked” or unable to urinate, which is a life-threatening emergency. A major indicator of this problem is a cat who’s meowing and making constant attempts to urinate in inappropriate locations.

My Cat Won’t Stop Meowing At Me: Now What?

If your cat just won’t stop meowing at you, there are a few solutions you can try.

First, make sure there isn’t a medical problem with a cat that might be causing the excessive meowing. Make an appointment with your vet for a physical exam and any other tests that might be needed.

If your cat is healthy, chances are you’re dealing with a behavioral issue. And in many cases, the behavior to examine is your own. Do you feed your cat every time they demand it? Give them attention at every meow?

If so, you’re showing your cat that their meowing produces the desired result so guess what? They keep doing it!

To break the meow/reward cycle, try ignoring your cat when they demand food or attention and offering it when they leave you alone instead. Eventually, your cat learns that they get what they want without having to constantly ask for it.

The longer you live with your cat, the more you will come to understand their own personal language. Not every meow is the same nor do they come with a universal meaning. Part of the joy of life with your cat is bonding with them in many ways, one of which is learning how they communicate. The next time your cat wakes you up before the sun demanding breakfast, remember that cats cared enough to develop a way to communicate with humans at all. Maybe that will make the early morning meowing easier to take!

Can I Take a Stray Cat to the Vet for Free? What You Need to Know!

Can Cats Eat Cake? What You Need to Know!