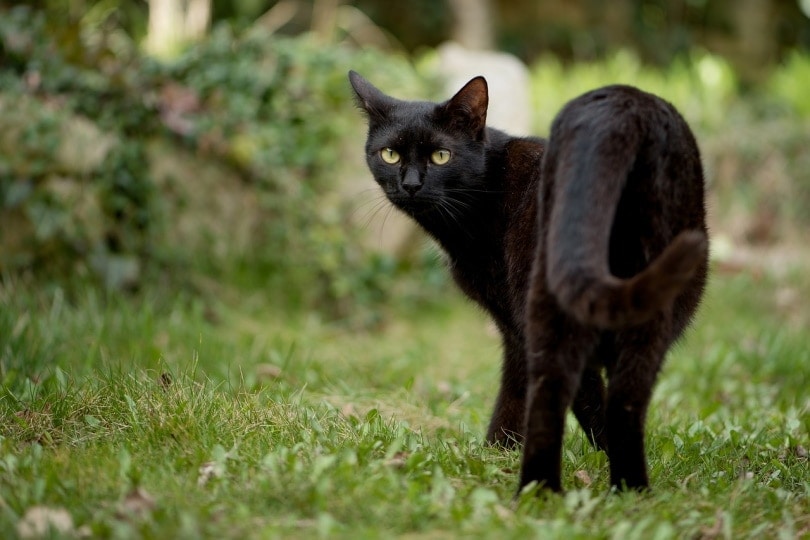 If you’re sharing your home with a cat, you surely are being entertained by your feline friend as cats are fun to watch! If you wonder why your cat wiggles his butt before he pounces on something, we’ve got the answer you need. This pre-pounce butt wiggle is as cute as it can be and it’s a behavior that pet cats and larger wild cats exhibit including lions, tigers, leopards, and jaguars.

While nobody knows for sure why cats wiggle their butts before attacking something, cat experts think it’s done to physically prepare for a successful pounce.

While it’s adorable when your feline friend wiggles his hind end when playing, pouncing is an innate hunting instinct in domestic cats. Even though your pet cat isn’t hunting for food to survive like his bigger wild counterparts, he’s still hunting in his mind even when he’s about to pounce on a cat toy because it’s pure animal instinct!

Experts also believe that the wiggling behavior is a way for a cat to test the stability of the ground it’s on before making the pounce. For example, if a cat were to pounce on loose ground, it probably wouldn’t be able to strike its target, which may be anything from an insect to a mouse.

Butt Wiggling is Learned and Innate

Butt wiggling in cats is both learned and innate. When kittens and grown cats play, they’re subconsciously toning their muscles and practicing hunting prey, even if they’re domesticated cats that are fed daily by humans.

As playful animals, pet cats love to pounce on basically anything that moves. When getting ready to pounce, a cat is usually excited and having fun. All this excitement and fun can play a part in why a cat wiggles his butt and even twitches his tail before making the pounce.

Humans do a bit of butt wiggling as well! Think about an athlete for a moment like a sprinter who wiggles and shakes his muscles before starting a race. This wiggling and shaking is a part of the runner’s warm-up routine that helps him get ready to make his big move at the start of the race. Like a cat’s goal of catching his prey after wiggling his butt, the sprinter’s goal is to come in first place.

Not All Cats Wiggle Their Butts Before Pouncing

While the cute butt wiggling before pouncing is common among cats, not all cats do it. Some cats crouch low to the ground while keeping their eyes squarely on the intended target before launching in the air to catch their prey. Some cats even do a combination of crouching and wiggling so you never know!

A Cat’s Body Language is Complex

Like dogs and other animals, cats use different body postures to communicate how they’re feeling. If you study your cat’s body language closely for a while, you’ll gain a better understanding of your feline friend. For example, when your cat wants to play, you may notice that he rolls over and exposes his belly while purring loudly. When he’s very scared, he may flatten his ears back on his head while crouching down and growling.

Butt wiggling before pouncing is both a learned and innate behavior cats exhibit when in ‘hunting mode’. Now that you know why cats wiggle their butts before they pounce, you can appreciate this cute behavior, even more, the next time your cat does it!

Are Sunflowers Toxic to Cats? What You Need to Know!