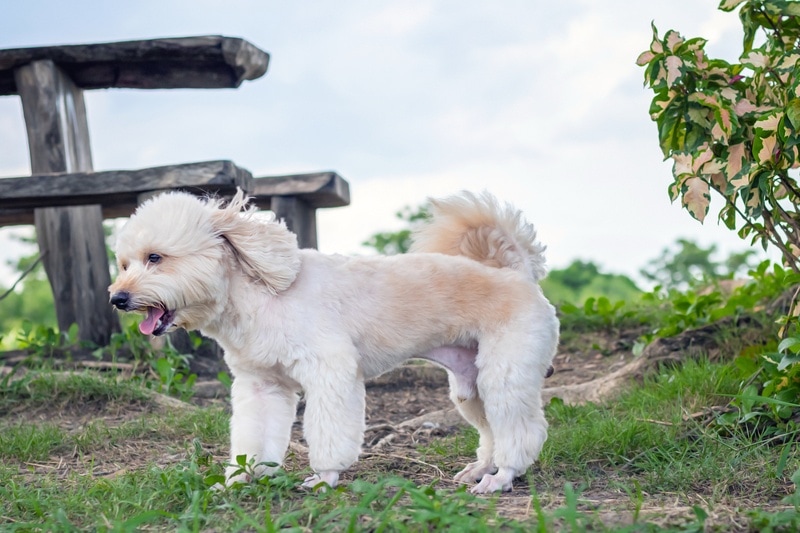 The Woodle is a beautiful designer dog that’s a result of breeding the Poodle and the Welsh Terrier together. Both standard and miniature-sized Poodles are used to breed this designer mixed dog, so the Woodle’s size can vary from pack to pack by a couple of inches. While the Woodle is not recognized by the AKC, both its parents are. So, some Woodles could come from long lines of prize-winning parents. The calm personality of the Woodle makes this a perfect breed for those who don’t have a lot of time for long walks and hours to spend at the dog park.

This medium-sized breed features a round face and button eyes that are sure to melt the hearts of anyone who spends time with them. Long, curly fur covers this breed’s stout body and short tail, which gives them a fluffy appearance.

The Woodle is smart enough to learn new tricks quickly and always seems to be looking for ways to make its owner happy. And this breed isn’t shy about reminding their owners that they’re around. If you are considering adopting a Woodle, read on to learn everything you need to know about their personality, health, needs, and more.

Woodle Puppies – Before You Get One…

1. Their Ancestors Have Been Around for A Long Time

Wales is the birthplace of the Welsh Terrier, where the breed is thought to have originated in the 1450s. The Welsh Terrier was raised to help farmers hunt for animals like badgers so they pests would stay out of the farmlands. The Poodle, which is the Woodle’s other parent, has a long history that dates back to the 15th century in Germany when an artist helped make this breed popular by featuring it in their paintings.

2. They Love Spending Time with Others

The Woodle is a calm and relaxed dog, but it loves to spend time with others whether humans or animals. They’ll hang out at home when necessary, but they crave lots of time with their owners. This breed will even make friends with cats and cuddle up with them if no humans are around to snuggle with.

3. They’re Not the Same Breed as a Whoodle

Temperament & Intelligence of the Woodle 🧠

The Woodle is a gentle and fun-loving dog that is easy to handle and enjoyable to play with. With a low energy drive, Woodles don’t expect to spend a lot of time exercising so they can get along well in a small apartment or without a yard to play in – even though a yard would be nice. This breed is loyal to their owners and won’t stray far away when out and about. Their good-natured attitude makes the Woodle a highly sought-after pet for people from all over the world.

When it comes to intelligence, Woodles leave nothing to be desired. These smart dogs will shine in obedience class and are always eager to learn a new skill at home. Due to their laid-back personality, this designer mixed breed can be trained as a service or therapy dog. And their medium size isn’t overbearing when spending time indoors or in cars.

Not only do Woodles get along well with children, but they can easily cohabitate with other pets that are living within the home. This breed often loves car rides, walks in the park, and a friendly game of fetch in the yard. But the Woodle won’t get too excited just because the kids are being rowdy. And they will welcome new babies into your home with open paws.

The Woodle seems to enjoy spending their time with other animals. Various breeds of dogs make excellent companions for them, but so do most cats depending on the cat’s attitude. Because this breed is not territorial or aggressive, owners don’t have to worry about their Woodle pups fighting with other animals over things like toys and food. And there is typically no chasing, biting, or herding to deal with.

Things to Know When Owning a Woodle

Owning a Woodle is a lot of fun, but it can also be a lot of responsibility. Just because this breed doesn’t mind lounging at home while you work doesn’t mean that they will be happy with just a few short moments of attention during the day. Be prepared to spend some of your free time with your new Woodle puppy and be willing to walk them a few times a week.

Although this breed is not small, it doesn’t need a lot of food compared to high activity breeds. Adult Woodles typically consume about two cups of dry food each day depending on their activity levels. Puppies may eat a little more, as they’re growing and in need of more energy than older Woodles.

But no matter the age, every Woodle should be fed a high-quality diet that is rich in whole foods and light on fillers. To be safe, we suggest talking to your veterinarian about the type and amount of dog food your particular Woodle should have soon after bringing him home for the first time.

Because the Woodle isn’t particularly active, they only need about 30 minutes of exercise each day. This exercise can come in the form of playing and training but walks in the neighborhood or park should be a part of your pooch’s regular lifestyle. Some time spent in the yard will help expel energy when it isn’t possible to go for a walk. But if walking is impossible for you on most days, it’s advisable to consider hiring a dog walker to spend some time with your Woodle three or four times a week.

The Woodle needs to be trained as a puppy to learn how you want them to behave once they reach adulthood. Luckily, this breed is smart and catches on quickly, so owners won’t find themselves having to spend days on end trying to teach the sit command. Even advanced skills can be taught to this beautiful mixed breed. Are you interested in having your Woodle fetch the newspaper for you every morning? With a little training, this wish could become a reality. Dancing, playing dead, and fetching are other skills children can have fun teaching this breed. Woodles can do well with agility training too, but don’t expect them to win first place often.

The Woodle’s coat is more like their Poodle parent’s than their Welsh Terrier counterpart. So, their ever-growing hair needs to be trimmed regularly. Otherwise, mats and tangles will likely take over and make your Woodle look unkempt. As an alternative to regular haircuts at the groomers, owners can simply shave their dogs to create a clean appearance and a soft coat that is easy to take care of.

Those who decide to keep their dog’s coat long will have to commit to daily brushing. A shaved cut reduces the need for brushing, yet the task should still be done once or twice a week. A bath in the tub or yard once in a while will help keep the coat soft and free of debris buildup.

This breed’s ears are quite floppy, so dirt and grime can easily get stuck in the lobes. For this reason, it’s important to clean the ears out with a damp cloth once a week or so. If a Woodle is active, they may never need their nails clipped. Less active dogs should have their nails clipped every couple of months.

Unfortunately, there are some serious health conditions that the Woodle is prone to, so it’s important to learn about them before deciding to adopt. Even the healthiest dogs should get wellness checks each year to catch signs of possible health problems early.

The male Woodle can get a bit bigger than the female, but this is not always the case. It depends on how large the parents are and whether the Poodle parent is of standard or miniature size. Both sexes are playful yet gentle, and neither tend to get territorial unless they are untrained and unsocialized.

Male Woodles tend to be easier to potty train than females, not that the girls are hard to train in the first place. When choosing whether to adopt a male of female Woodle, it should really come down to your personal preference.

The Woodle is an all-around good dog that is easy to get along with and that won’t cause a lot of problems within the household. This breed walks well on a leash and can successfully integrate themselves into social situations, especially if they’ve been socialized from an early age.

You may have to vacuum your home more often to keep the dog hair off the floor, but the cuddles and loyalty you receive in return will be well worth the effort. We recommend the Woodle for families, singles, seniors, and those who live with other pets. And both apartments and houses provider adequate shelter for this breed.