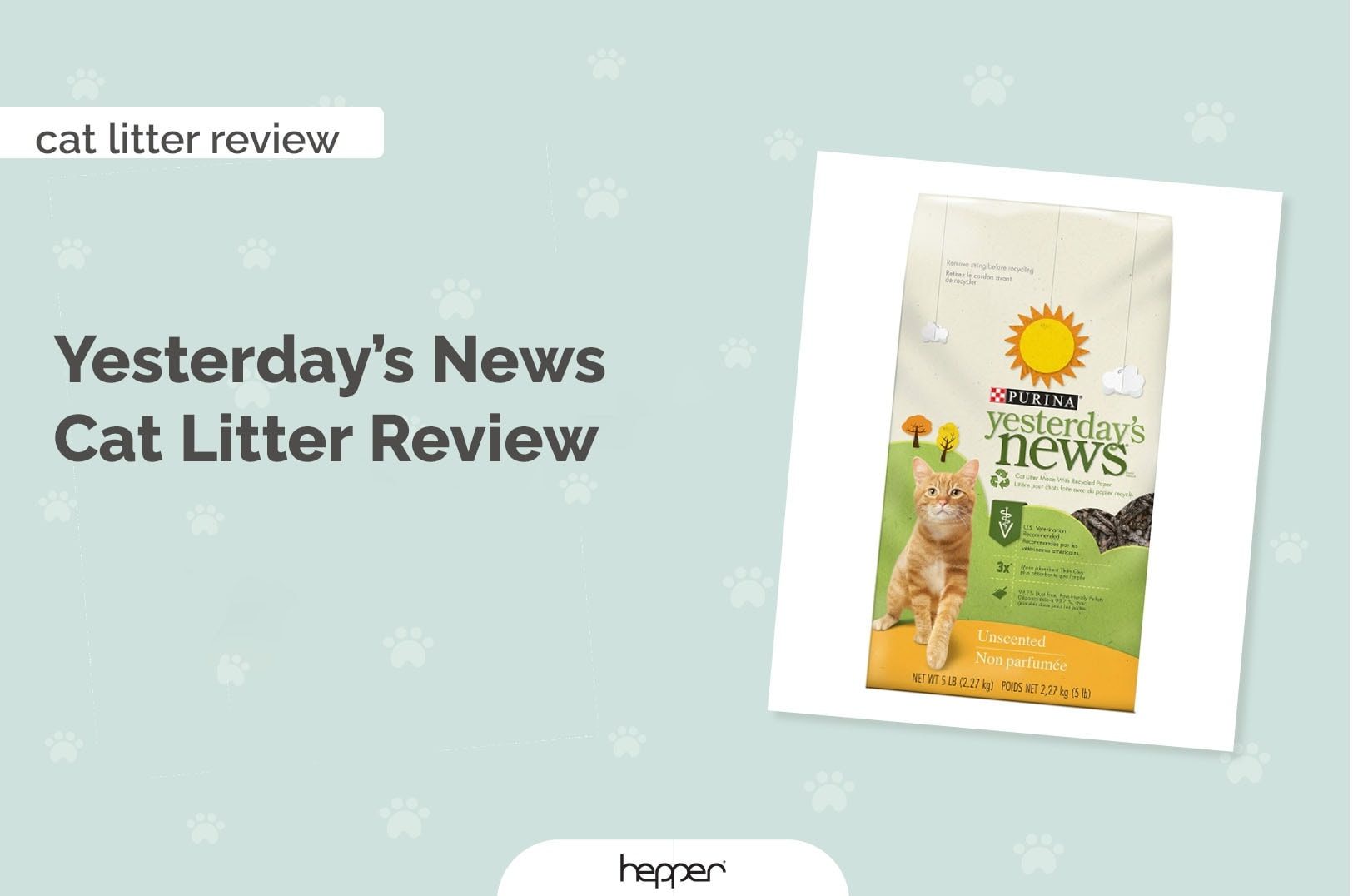 Disclaimer: Purina has discontinued its Yesterday’s News cat litter product line. We recommend checking out our other top choices for litters here.

Our Final Verdict
We give Yesterday’s News a rating of 3.5 out of 5 stars.

Yesterday’s News is just one of a full slate of cat-related products owned by the USA-based Ralston Purina. The company also produces food and treats under multiple brands. It’s worth noting that the business also owns Tidy Cat. William H. Danforth founded Purina Mills in 1894. It quickly gained recognition for the animal-based feeds it produced under the name Chow.

Cat litter is a relatively new concept, getting its start in 1947. The first products offered an imperfect solution to a messy problem. It played on the feline instinct to cover their waste. Yesterday’s News came on the scene 40 years in 1987. Its aim was to solve the issues of clay-based litter with something that would also appeal to eco-minded individuals. On that score, it succeeded. But that’s not the whole story.

At a Glance: The Best Yesterday’s News:

Who Makes Yesterday’s News and Where Is It Produced?

The headquarters for Ralston Purina is in St. Louis, Missouri. Yesterday’s News fits in with the company’s sustainability mission for a zero environmental impact in their operations. The product is made of 100% post-consumer newspaper. Paper makes up nearly one-quarter of the total municipal solid waste, with almost 65% of newspaper recycled.

Which Types of Pets is Yesterday’s News Best Suited For?

Any animal that uses a litter box will benefit from using Yesterday’s News. Its main selling point is for cats that are recovering from surgery. The product is 99.7% dust-free. It won’t irritate sutures, skin conditions, or wounds. Veterinarians often recommend it after declawing to support healthy healing. It’s worth noting that the American Veterinary Medical Association (AVMA) disapproves of this procedure.

Which Types of Pets Might Do Better With a Different Brand?

Yesterday’s News’ original formulation is compressed pellets and is quite different from other types of litter. Pets that aren’t picky about it will transition well to the use of the product. However, some cats may refuse to use it because of its texture. Perhaps in response to these situations, Purina recently announced the addition of a clumping product, albeit with the same consistency.

Discussion of the Primary Ingredients (Good and Bad)

Discussing the ingredients of Yesterday’s News is easy since there is only one recycled newspaper for the original forms. The production process removes any potentially harmful things that could hurt your pet. The clumping litter has more sources of recycled materials to produce this texture. However, that only scratches the surface about using this product for your cat.

One significant factor going for Yesterday’s News over clay litter is its absorbency. That’s where it succeeds over the latter. That is both a good thing and a bad thing. It does an excellent job at it. However, it also makes the used litter heavy and the litter box more difficult to clean since you can’t scoop it out. That talking point applies primarily to the original formulation of the product and not the clumping version.

Anyone who has cats will tell you that it’s hard to hide the fact because there’s always litter around the house no matter how hard you try. That is one of the main drawbacks of using any clay-based products. It’s also one area in which Yesterday’s News succeeds. There is no litter tracking with this one. The pellets are too big to get caught on your pet’s paws.

One frequent complaint about Yesterday’s News is its mediocre odor control. Unfortunately, it’s par for the course, considering its ingredient and how it’s made. While some products have tried to tackle this issue, this one falls short. That can put it in the deal-breaker category, especially if you live in a small home or have the litter box in a little room.

A Quick Look at Yesterday’s News

Reviews of the 3 Best Yesterday’s News

Yesterday’s News has five products in its line of litters in three versions. Each one offers something different, making all of them worth a closer look.

Yesterday’s News Non-Clumping Original Formula Unscented Cat Litter is the product that started it all. It took the problem of tracking and dust and provided a decent solution. It manages both of those issues well. We liked the unscented version of the product, although it has a slight odor on its own. Cleaning is difficult with no clumping of liquid waste. Instead, the pellets disintegrate, making it necessary to replace the litter frequently.

Some pets don’t like the feel of the original product. Purina’s answer was Yesterday’s News Non-Clumping Softer Texture Fresh Scent Cat Litter. This one is like a hybrid between clay and the original formulation. It offers an alternative if the original is too harsh on your pet’s paws. Unfortunately, it doesn’t work nearly as well at odor control. The pellets also break down quicker, leaving a mess in their wake.

Yesterday’s News Unscented Clumping Paper Cat Litter expands on its ingredient list to deliver a product more like the one your pet probably prefers. It adds cardboard and wood shavings to the list of recycled materials. Mineral oil and guar gum provide the glue that holds the litter together. They also keep down the dust. The resulting texture is coarse, not unlike clay-based products.

What Other Users Are Saying

However, don’t just take our word for what we think of Yesterday’s News. Here’s a sampling of what others have said about this product.

Yesterday’s News isn’t the best product for every pet owner or cat. However, if choosing eco-friendly products is essential for you, it’s worth a look. These litters solve many of the problems that come from having kitties in the home. Tracking and dust are virtually eliminated. On the downside, they aren’t the easier litters to use, especially the non-clumping version.

The clumping form of Yesterday’s News makes your job a bit easier. However, it’s still a compromise. The bottom line depends on your views on buying environmentally friendly products. It also rests with how willing you are to take on the extra work you’ll need to do to keep down the odors and mess.

How to Train a Stray Cat to use a Litter Box? 7 Easy Steps

Clumping vs Non-Clumping Cat Litter: Which Type is the Best?

Where to Put the Cat Litter Box in a Small Apartment