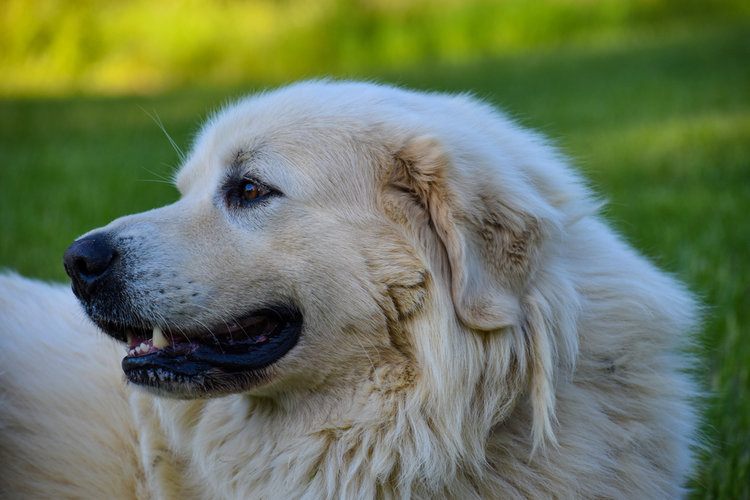 The Anatolian Pyrenees is a cross between the Anatolian Shepherd and the Great Pyrenees. Both breeds are large, and they were originally bred for use as livestock guardians. Widely described as being a gentle giant, the breed is gentle and great with kids, and, if socialized early, it will happily mix and live with dogs and other family animals.

Anatolian Pyrenees require a lot of grooming and can be headstrong. They also require strict training to keep them entertained. Their heritage as flock guardians means that although some adult dogs can live successfully in apartments, they are better suited to a family home with room to roam. Their training and grooming requirements mean that the Anatolian Pyrenees is better suited to experienced dog owners.

Anatolian Pyrenees Puppies – Before You Buy…

Although the Anatolian Pyrenees breed is still quite rare, the price of puppies remains reasonable. You should expect to pay between $300 and $1,000 dependent on the breeder, and the lineage of your puppy.

The Anatolian Pyrenees is a descendent of the Great Pyrenees. Although the Great Pyrenees hails from the mountains of Spain and Andorra, King Louis XIV named the breed the Royal Dog of France in 1675. It was popular with nobility because its natural traits meant that it was well suited to guarding large estates. It is also featured in the Royal Arms of France dating back to the 12th Century.

Fossilized remains of Great Pyrenees dogs have been found with Bronze Age artifacts dating back to around 1,500BC. They were used to defend livestock against wild animals including wolves and bears, and worked with shepherds in the Pyrenees mountains.

Temperament & Intelligence of the Anatolian Pyrenees

The Anatolian Pyrenees is a gentle giant, taking attributes from both the Great Pyrenees and Anatolian Shepherd breeds. They make good family pets because they are loving and kind while being extremely protective.

Socialization and good training are important to ensure that they are used to interacting with dogs, other animals, children, and people. Training is also important because the Anatolian Pyrenees breed is an intelligent breed that can bore easily. For these reasons, and because they are used to roaming large areas of land, they require a lot of exercise and tend to prefer houses with large gardens. Your Pyr will want to spend a lot of its time outdoors. Once they are indoors, though, they become mellow and loving family pets.

Their size, grooming, and training requirements mean that this incredible breed is not suitable for novice dog owners. They can become unruly if you don’t train them early and properly.

The Anatolian Pyrenees can make an excellent family pet if they are well trained and well socialized. They instinctively look to protect their pack and can be fiercely protective. Training not only prevents bad habits, but it teaches them they are part of a pack and that you can look after yourself without the need for aggressive protection.

With good training, the Anatolian Pyrenees can make an excellent companion to other pets. They also need socializing at a young age. Their natural instinct is to protect and guard their pack.

A post shared by Bruno the Big Blonde Dog (@brewskies42)

Things to Know When Owning an Anatolian Pyrenees:

The Anatolian Pyrenees is a working dog so it requires an investment of time and effort. However, their protective and loving nature means that the effort is rewarded. Below are some things you need to know about the breed.

Anatolian Pyrenees are big dogs and they have the dietary demands of a big breed. An adult can eat between 40 and 60 pounds of dog food a month and they will benefit from eating premium food.

Experts advise against free feeding. Puppies should be fed two or three small meals of good quality puppy food a day and dietary supplements should not be given. Adults can eat once or twice, and you should measure the food out to ensure that they are not overfed. Big breeds like the Anatolian can pack weight on quickly, and even though they love time outside and exercise, it is a lot more difficult to get the weight off. The breed is prone to hip dysplasia, which is exacerbated by being overweight. Puppies should be fed to grow slowly, and it is recommended that adult dogs have a diet consisting of around 2,000 calories a day.

The Anatolian Pyrenees is a cross of two energetic dogs and has a reasonable exercise requirement. They will require at least one good walk a day and are better suited to a home environment that includes a decent sized yard. Always ensure that fences and walls are at least six feet high because this breed is well known for its ability to escape over shorter boundaries.

Exercising the Anatolian not only means providing physical exercise but mental stimulation. They are prowlers and protectors, rather than chasers, so they may require more than a game of fetch to tire them out.

Training needs to be constant and consistent. Both parent breeds are independent. If given the freedom to roam and do as they please, they will, and as with any independent dog they can be difficult to train, especially for inexperienced handlers. With firm training, however, they will pick things up easily, but without this guiding hand, they can display bad habits and become quite naughty.

Puppy training classes can be beneficial because of the breed’s independence. If they are not interested in the command you are teaching, or they don’t see the benefit, they will often overlook your commands. Puppy training classes not only help teach the puppy, but they give you effective training techniques. They also help ensure that your puppy is well socialized.

Although this breed does require firm training, they do not respond well to harsh reprimands.

This breed has a long coat to withstand the cold weather of the Pyrenees mountains. Their heritage means that the fur is naturally tangle resistant, in most cases, but they require weekly brushing to keep their coat neat and tidy. Although rare, some dogs of this breed can suffer from matted hair. In this case, you will need to adopt a more frequent grooming routine. They shed twice a year when they will require more brushing, and they tend to shed more than average. Check the coat for ticks, lice, and other insects because they are prone to collecting these unwanted guests during prolonged periods outdoors.

Being outdoor dogs, Anatolian Pyrenees owners need to check their dog’s teeth, ears, and nails. Nails should be clipped when you can hear them catching on the ground. Ears should be checked to ensure that they aren’t filled with wax or debris because this can lead to infection and discomfort and is more common in dogs that spend a lot of time roaming outdoors. You should clean their teeth at least two or three times a week.

Like a lot of big dogs, the Anatolian is prone to some drooling, although this is less likely than in other large breeds. Some drooling is perfectly natural and is more common in large breeds because of a combination of a short snout, loose jowls, and loose skin around the mouth. Excessive drooling, when not in conjunction with long car rides, might be a sign of a bigger problem so you should get this checked out.

Crossbreed dogs tend to have better health than purebred dogs. And Anatolian Pyrenees are a hardy dog. They typically have above-average health, although there are some conditions that you need to keep an eye out for.

They are a big dog, which means that they are more prone to conditions like hip dysplasia than smaller breeds. This usually occurs when the ball and socket of the hip grow at different rates and, in its most severe form, hip dysplasia can cause lameness and arthritic pain.

They are also prone to demodectic mange, which is more commonly found in puppies younger than 18 months than in adult dogs. Virtually all dogs have mites. If they have a healthy immune system, the mites shouldn’t become a problem, but if your dog has a compromised or immature immune system, they could develop mange. Demodectic mange can be treated with topical creams but might require a more aggressive shampoo or dip treatment.

Generally speaking, females tend to be more strong-willed and dominant than males. Owners are advised against owning two females because they will both want to rule the roost. Both sexes grow to around the same size, and characteristics vary according to the individual dog, especially in this breed.

The Anatolian Pyrenees is a cross between two attractive, independent, hardy, herd guardians, both of which have a long and distinguished history. They are white with a combination of other colors and their independent nature and training requirements mean that this dog is better suited to experienced owners.

If you fit this bill, then the Anatolian can make a brilliant family pet. It is loving, gentle, and can be extremely attentive and protective. Be prepared to offer mental stimulation and offer a decent amount of physical exercise for your dog if you adopt an Anatolian Pyrenees cross.

Although they do require regular walks, the Anatolian Pyr does not require as much walking as breeds like huskies and they do not tend to suffer from traits like excessive drooling or excessive shedding like some other big breeds.