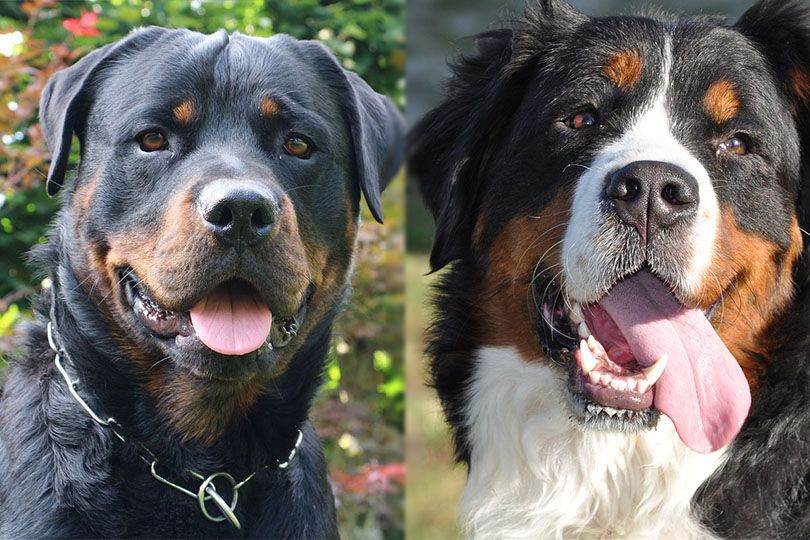 This is a very curious breed that can be independent at times, so they do best in large outdoor areas where they can explore and investigate as they please. Owners with large plots of land that include forest areas will find that their Bernese Rotties enjoy the freedom to adventure.

While they may enjoy their independence, they’re also big mushes and will happily spend some time each day snuggling or lounging with their owners. They love human interaction as much as they enjoy the fresh air.

The Bernweiler is an interesting and unique hybrid, and we’ll go over everything you need to know about these gentle giants below.

Bernese Rottie Puppies – Before You Get One…

Bernese Rottie puppies are small and adorable balls of fluff, and while you may be tempted to pick out two or three, know that these little guys can reach well in excess of 100 pounds! They may be small as puppies, but they grow quickly into large dogs, so be prepared for a four-legged behemoth once your pup is full grown.

These dogs like some time by themselves, but they also don’t do well in prolonged isolation. If you or a family member aren’t home for long stretches of time, you should reconsider getting this breed. They do best with company around despite their independence, and they’re recommended for homes with lots of interaction and even those with other dogs.

Along with that tendency for independence comes a bit of stubbornness, so be prepared to train your Bernweiler puppy from an early age. They learn quickly and likely won’t take long to be housebroken, but you will need to put some effort and time in to make sure good habits stick.

3 Little-Known Facts About the Bernese Rottie

1. They come from a long line of working dogs.

The parent breeds of this hybrid were both originally bred for work. Bernese Mountain Dogs were bred as guard dogs and carting dogs in Switzerland. Their large size and immense power gave them the ability to pull carts of goods, and these traits also made them appear intimidating despite their tendency to be a naturally gentle breed.

Rottweilers were originally bred to be agile and alert guard dogs, and their muscularity and tendency toward being territorial made them a great breed for the job of watching and protecting livestock, goods, and homes.

2. Their appearance can vary greatly.

As is the case with all hybrid breeds, the Bernese Rottie takes traits and physical appearances from both parent breeds. Some crossbreeds involve a parent breed that has many dominant features which leads to pups looking like one breed more than the other, but this isn’t the case for Bernese Rotties.

While the puppies often appear mostly like a Rottweiler, as your dog grows older, they may take on mostly traits from one parent or be a good mix of both. Often these grown pups will look like furry Rottweilers or short-haired Bernese Mountain Dogs. No matter what, they’re as cute as adults as they are when they’re puppies!

You might think that a large dog built of muscle is likely to have a large personality and presence to match, but Bernese Rotties can actually be shy.

This trait is attributed in part to the Rottweiler’s independence and the Bernese Mountain Dog’s laid-back personality. These traits combined can lead to a large, intimidating pup who can be timid and uneasy when meeting new people or other dogs.

Temperament & Intelligence of the Bernese Rottie 🧠

Bernese Rotties are known for being fun-loving, explorative, and affectionate by nature. You’ll find that these pups can fit in with nearly anyone who happens to be around. They’ll gladly adventure and play well with children, relax with retirees, or snuggle and lounge with anyone who’s up for some resting. What’s more, they are smart and can learn to take commands fairly easily — despite the occasional stubborn streak.

They adore affection and attention, and they won’t care from which family member they receive it! Because this breed is protective and loyal to its family members, it’s extremely rare that you’d ever see these dogs not get along with a family member or close friend. However, they are territorial and protective, so if they perceive someone as a threat, your dog will let them know they aren’t welcome.

Bernweilers are also excellent with children, and they will become attached to any kids they live with. It’s important to know that even if another family member is seen as a threat to a child, this breed may also become protective. For this reason, proper training from an early age is important to establish all family members as safe and friendly.

Believe it or not, your Bernese Rottie pup will likely be as protective of any cat or other dog you have as they are of your children! These dogs are laid back enough to be able to get along and share even close quarters with your other pets, and their positive and welcoming attitude toward other four-legged friends makes this an excellent breed for you if you have other animals in your house.

Things to Know When Owning a Bernese Rottie

Being a large and muscular dog, your Bernese Rottie will need a lot of food to stay healthy, happy, and satisfied. Expect to feed your pup between five and six cups of dry dog food a day. As you can imagine, the food bill for this dog will be rather high, so be prepared to invest in large quantities of dog food!

High protein diets are essential for all dogs, but especially those with a high muscle mass like the Bernese Rottie. They may adore lounging, but their need for extensive daily exercise will mean their metabolisms are in high gear, so be prepared and always keep back up bags of food on hand.

These pups seem to enjoy their food in multiple portions throughout the day, and you should never let them go too long without a meal to avoid hunger and lethargy.

If you do decide this breed is for you, you’ll also find that they love treats. You may think all dogs love treats, but not like the Bernese Rottie! You should always have treats on hand to give your pup throughout the day in addition to their food to keep their metabolism running and a smile on their furry face.

With a big appetite comes big activity! You won’t wonder long how your dog eats so much food, because their energy levels, while cyclical, are very high.

You should expect to walk your Bernese Rottie every single day for at least an hour, and it’s highly recommended that they get some off-leash time as well to poke around and meander on their own terms.

Not providing the proper amount of exercise and mental stimulation can lead to destructive behavior and unhappiness or depression in your pup, so make sure you have the time to set aside for exercise every day before committing to this breed.

These dogs can go through cycles of activity; one minute they might be happy lounging and relaxing, and the next they’re up and ready to run and play. These dogs have the ability and sometimes the drive to exercise for longer periods of time, so if you’re a very active person, your pooch may be willing to stick by your side through whatever exercise you’re doing.

It’s important to mention that, given their thick coats, these dogs can become overexerted in hot weather. Be very careful not to overwork your dog in the summer or naturally warm climates.

Bernese Rotties are intelligent and eager to please their owners, so, generally speaking, they won’t be difficult to train. They can be a bit stubborn and thick-headed at times, so be persistent with your training efforts. With a consistent routine and positive reinforcement (did someone say, “treats”?), you shouldn’t have many issues with instilling good behavior and habits in your dog.

Your Bernese Rottie can have varying lengths of fur depending on which parent breed they inherit physical traits from most. With all dogs of this breed, and especially those with longer hair, weekly brushing is required to prevent matting and tangling. You’ll also want to bathe your pup once a month or so to keep their skin and coat healthy.

Given their medium-to-long double coat, this breed can be expected to shed a lot, especially as the seasons progress away from winter. Brushing regularly will help limit shedding, but you’re unlikely to keep up with it entirely, so prepare to vacuum often as well.

Aside from this, clean your pup’s ears and teeth regularly to help limit ear infections and tooth and gum issues.

While the Bernese Rottie isn’t prone to many medical issues, the ones that are common are unfortunately, very serious. Your pup should be taken for routine screening and vet checkups so you can catch these issues early and treat them if possible and applicable.

You can expect male Bernese Rotties to be a bit more territorial and protective than the females, and they may also be more independent and desire more alone time to explore. The size of these dogs surprisingly isn’t dependent on gender, and both males and female Bernese Rotties will enjoy exercise and freedom as well as affection and attention.

Bernese Rotties embody a lot of what many people desire and expect from a large dog: protection and loyalty along with gentleness and affection. They’ll be wonderful additions to your family and home.

Bernese Rotties do best if they have room to be on their own and enjoy the smells and sounds of nature. Off-leash time is just as important to this breed as exercise with their humans.

If you’re looking for a big mush of a pup who will stand at your side no matter what, but also one who will snuggle and offer lots of love and attention, the Bernese Rottie may be the perfect hybrid breed for you!