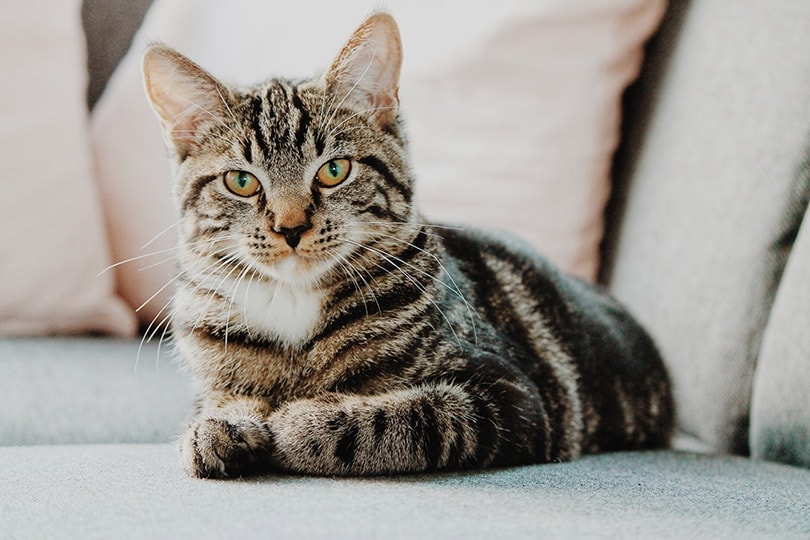 Even though both animals are incredibly popular as pets, cats and dogs are completely different in many ways. Dogs are extremely social, whereas cats are more aloof. Dogs are high-maintenance, and cats are less so. Dogs thrive on praise from you, while most cats couldn’t care less.

There’s another key difference that you should know about, though, and it’s not necessarily fun: It’s the fact that cats tend to live significantly longer than dogs.

On average (across all breeds), dogs live 12 years while cats live 15. But why do cats get to live 25% longer than dogs?

There are several different theories as to why this is, and we examine them all in detail here.

Theory: Cats Live Longer Because They are Solitary Creatures

In the wild, dogs live in packs, while most cat species (with the notable exception of lions) live solitary lives. Animals like leopards and tigers will generally encounter other adult cats when it’s time to mate, but they’ll spend the rest of their lives on their own.

As a result, they’re not overly at-risk of catching infectious diseases. If a single dog comes down with some sort of illness, it won’t be long until it spreads to the rest of the pack, taking out a few along the way. If a cat catches something, though, it will likely be limited to them and them alone.

There are a few flaws to this theory, however. While a pack of dogs may be more susceptible to infectious diseases, they’re also more effective hunters when they work as a pack, and starvation is usually a bigger threat in the wild than disease. It seems like this would balance the scales a bit, at least to the point that cats wouldn’t live 25% longer than dogs.

Theory: Cats Live Longer Because They Have More Weapons at Their Disposal

If a dog is attacked or threatened, they only have one defense: biting. Cats can do that too, but they also have ferocious claws that they can use to keep an aggressor at bay.

This secondary weapon can make them so ferocious that other animals will leave them alone, enabling them to live longer, happier lives.

There are flaws to be found here, however. While dogs may only have a set of teeth and jaws, they usually hang out in packs, so it’s like they have multiple sets of teeth and jaws. If a cat is hunted or attacked, they won’t have family members coming to the rescue.

Theory: Humans Are the Problem

Dogs have been domesticated longer than cats have, and humans have gone a little overboard in creating different dog breeds. When you think about it, it’s kind of wild that the Great Dane and Chihuahua are both dogs, given how different they are.

Cats, on the other hand, haven’t been tampered with as much. Most cat breeds are fairly similar in size and appearance, without the wild variations that we find in dogs.

All this tampering comes at a cost, however. Many breeds have had their lifespans shortened by generations of inbreeding and other issues, bringing down the life expectancy of dogs as a whole.

Is this enough to account for the lifespan gap? It’s hard to say, but even breeds that have been relatively untampered with still tend to lead shorter lives than cats, so we’re skeptical.

Also, this theory ignores another key data point: the fact that cats that are allowed outdoors have extremely short life expectancies, sometimes as low as 2 years. Given that some estimates peg the number of stray and feral cats in the United States as high as 60 million, it would seem that this would more than make up for the impact breeds like English Bulldogs have on dogs’ life expectancy.

Theory: The Answer Lies Way Back in the Animals’ History

When we think about cats and dogs, we usually picture the dog chasing the cat, but according to a study from the Proceedings of the National Academy of Sciences, that wasn’t always the case.

They did this by occasionally eating them, of course, but mostly, they were just better at catching prey. This is in direct opposition to the situation today, so it’s hard to say if these dogs just hadn’t figured out how to hunt in packs yet or if ancient cats were way better at catching prey than modern cats are.

In order to survive, dogs were forced to evolve, becoming much larger as a result. This made them less susceptible to predation, while also enabling them to eat a wider variety of other animals. They also had an ace up their sleeve: a partnership with a weird species that walked in a bipedal manner.

If early cats were vastly superior hunters than early dogs, it would make sense that they would live longer. But would that difference still be this dramatic 20 million years later?

A Strange Issue at the Heart of the Dilemma

In the wild, the general rule is that the bigger the animal, the longer it lives. This is because larger animals are less likely to have predators, enabling them to evolve to be hardier than their competition. They’re also less likely to constantly be running around looking for food or running from predators, preventing them from “burning out” too early.

With dogs, however, the opposite is true. Larger breeds almost always lead shorter lives than smaller breeds; for example, a Great Dane is expected to live between 8 and 10 years, whereas Chihuahuas can live from 12 to 20 years.

While we know what causes large dogs to die sooner than their smaller counterparts — they simply age faster — what we don’t know is why. The answer is likely that since these large breeds are large due to human intervention, nature hasn’t been able to catch up yet.

A Bit of Good News for Dogs

The good news in all of this is that regardless of breed (with the possible exception of Bernese Mountain Dogs), dogs are living longer nowadays than they did in the past.

This is due to various factors, including improved healthcare, owners who take their dogs’ health more seriously, and higher-quality food. If this trend continues, it may not be long until dogs have caught up to cats in the longevity department.

That is, it might not be long until dogs have caught up to where cats are today. As it turns out, cats are also living longer and for many the same reasons. By the time that dogs get to the point where they’re living 15 years, cats may well be living to 20.

What’s the Verdict? Why Do Cats Live Longer Than Dogs?

Now that we’ve looked at the prevailing theories on the subject, what’s the answer? Why do cats live longer than dogs?

The answer is that we’re not really sure. You’ll have to decide for yourself which theory you think is most likely to explain the phenomenon, or if none of them seem plausible, you’ll have to wait for better options to come along.

In the end, the truth may be the most maddening answer of all: cats live longer than dogs just because.

Can Cats Eat Oats? What You Need To Know!

Why Do Cats Tilt Their Heads? 6 Reasons for This Behavior