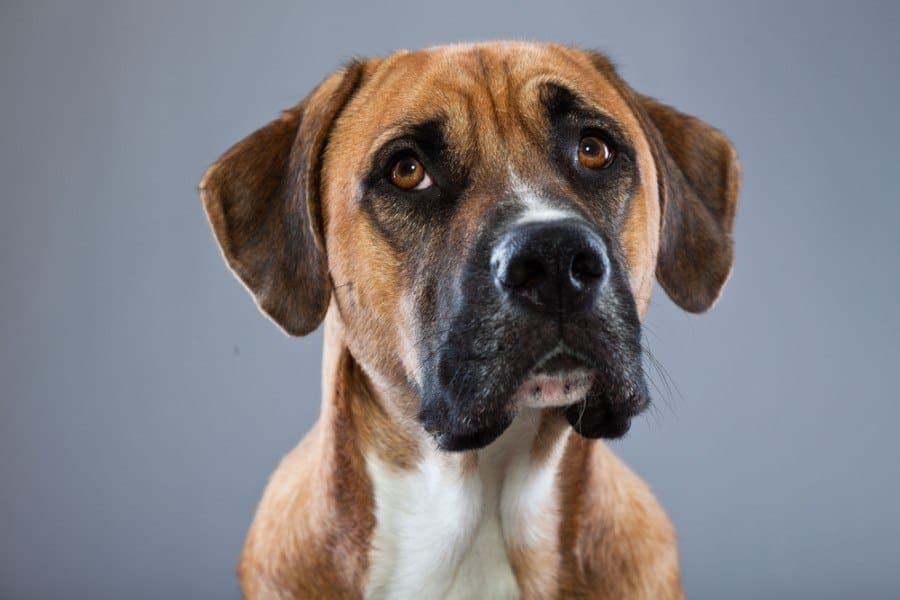 The Boxane is a designer breed that is the result of crossing a purebred Boxer with a purebred Great Dane. It is not known exactly when the bread was first developed; however, it is thought to have been sometime in the late 1980s, when designer breeds first started growing in popularity.

Standing at up to 32 inches tall and weighing as much as 150 pounds, the Boxane is one of the largest designer dog breeds.

Despite their size, the Boxane is a friendly dog that loves being around people. They have endless amounts of energy and big, excitable personalities, a combination that together with their size, means they are not suitable for life in an apartment. Instead, they generally prefer to spend their time outside in a large yard where they can run about and explore.

Boxane Puppies — Before You Get One…

Buying any dog requires commitment. But when that dog is as big as a Boxane, there are a few extra things you need to consider. For starters, these dogs need a great deal of outdoor space. Ideally, that should be in the form of a large and secure yard in which they can run about freely.

From a financial perspective, you should also consider whether you can afford to keep a dog this size. Boxanes eat a large amount of food, and not only does the cost of their food add up, but everything they need, including things like vaccinations and holiday boarding, will cost more than it would be for a smaller dog.

3 Little-Known Facts About the Boxane

1. Even within the same litter, the Boxane’s size can vary by up to 90 pounds.

As is typical with hybrid breeds, particularly those with parent dogs that have significant physical differences, the appearance of your puppy can vary substantially, depending upon which genes are most dominant.

This means that fully grown Boxanes from the same litter may have a weight range of between 60 and 150 pounds.

Neither the Great Dane nor the Boxer has a reputation for being an excessive barker, a trait that they have passed on to the Boxane.

This is not to say that they are not vocal dogs, just that they will usually vocalize with a range of grumbles, growls, and whines.

The Boxane’s bark is like that of a Great Dane: loud, deep, and capable of carrying for a considerable distance.

3. The Boxane may be aggressive toward dogs they don’t know.

Aggression toward other dogs is a trait that the Boxane can sometimes inherit from their Great Dane parent and is an issue that if left unchecked, can be particularly problematic given their size.

Fortunately, this aggressive behavior can be prevented or at least greatly reduced through early socialization, ongoing regular exposure to other dogs and training.

Temperament & Intelligence of the Boxane 🧠

The Boxane is a popular family dog, but they are not a dog that will be for everybody. To start with, due to their size, they need a family that lives in a house with a large yard. The Boxane is not at all suitable for life in an apartment.

They are typically quite good with children. However, they are excitable dogs, and when they start running and jumping about the place, they can unintentionally knock a small child over and injure them. For this reason, the Boxane is not the best dog to get when you have toddlers and young children.

Provided they are raised together, a Boxane and other pets will get along. Boxanes are big softies at heart, and if they see your cat or another smaller dog as being part of their family, they won’t hurt or harass them in any way.

However, you may have issues if you decide to introduce a new dog into your household with an adult Boxane, as they can be aggressive toward dogs they don’t know.

Things to Know When Owning a Boxane

Regardless of which of their parent breeds that your Boxane most resembles in size, the one thing you can be assured of is that they will grow up to be a large, active dog.

They require a great deal of exercise each day, and you need to be prepared to spend several hours a day taking them out for a long walk or run. You should also be prepared for them to take over and destroy your yard. As any owner of a big dog will tell you, it is next to impossible to maintain a nicely manicured lawn when you have a large dog romping around on it every day.

The Boxane is a large, highly active dog that requires a diet that will give them both the nutrition and energy they need.

We recommend that a Boxane should be fed high-quality, size-specific dog food, such as Royal Canin Large Adult Dry Dog Food, which will meet all their daily nutritional requirements.

Regardless of the brand of food that you choose, you should always follow the feeding guide on the packaging unless advised otherwise by your dog’s vet. Being large dogs, Boxanes can be susceptible to joint problems later in their life, and these can be more of a problem when a dog is overweight.

Getting daily exercise is not optional with a Boxane, but rather an absolute necessity. On average, your Boxane will require at least 60-90 minutes of vigorous exercise each day. In addition to taking them for a walk or run around the neighborhood, you may want to consider activities such as hiking or trail running, as exploring new areas and different routes is a great way to prevent boredom from setting in.

The Boxane is quite an intelligent dog and can pick up new things quite quickly. They do, however, have a bit of a stubborn streak. So, unless you find a way to keep their training fun and interesting, you may have trouble getting your dog to go along with the program.

As with most dogs, Boxanes respond best to positive reinforcement, so always try to praise or reward them when they get things right, ignore them when things don’t go as planned, and never scold or threaten them if they get something wrong.

As mentioned earlier, it is imperative that in addition to obedience training, you take the time to socialize your Boxane while they are young. It is particularly important that your dog gets comfortable meeting and playing with new dogs while still a puppy, to prevent them from showing aggression toward other dogs later in life.

When it comes to grooming, the Boxane is quite an easy dog to look after. They have short straight hair that will not knot or tangle, so they can typically get away with being brushed once every couple of weeks. Regular bathing is not required either, which given the size of the Boxane, is fortunate.

As with all dogs, your Boxane will need to have their nails clipped every four to six weeks and will also benefit from having their teeth brushed with a canine toothpaste regularly.

A post shared by Mack Nugget the GREAT Boxane (@wigglesandkisses)

As is typical with big dogs, Boxanes can have issues with their hips and joints later in life. But apart from this, they are generally quite healthy dogs.

Of course, there are a few conditions to which Boxanes are susceptible. Some can be avoided with health screening and careful breeding. Diseases to watch out for include:

When it comes to selecting a Boxane puppy, differences that you might consider between the sexes, such as size and weight, are less obvious. This is because the greatest influence on a Boxane’s size and weight is not their sex, but rather whether they take after their Great Dane parent or their Boxer parent.

Some things will still differ base on the sex of your dog. Male Boxanes, particularly whole males, for example, are more likely to stray than females, while female Boxanes in heat are more likely than males to be territorial. However, these behavioral differences can be eliminated by spaying or neutering your Boxane.

The Boxane is a big, friendly, and highly active dog that with the right owner, can be both a fantastic companion and family pet. They do, however, take quite a bit of looking after, and they’re not going to be the right dog for everybody.

Boxanes are also not the best dog for a novice owner or anybody timid around animals. But if you have owned dogs before and want a big friendly pet with a heart of gold, the Boxane could be good for you.