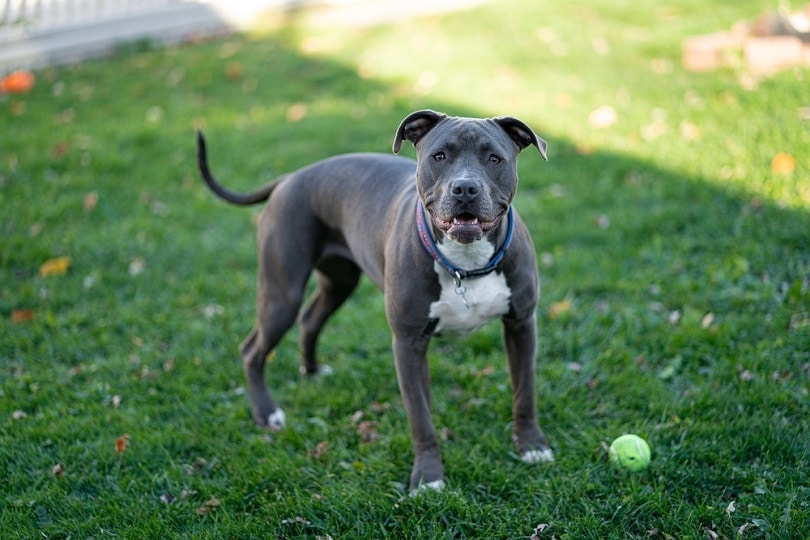 The Pitbull has been a popular dog in the United States for over 150 years. At the turn of the 20th century, pit bulls supported soldiers in World War I; they were also mascots for sports teams, and some even held movie roles. The Pitbull’s coat features different colors: black, white, fawn, red, brown, and many more shades. Depending on the animal, the color is not always structured. For example, some dogs sport a Red Nose, a Black Nose, or even a Blue Nose.

In fact, Pitbulls’ colors and coat patterns are as diverse as the rainbow. Here we present the 16 rarest and most beautiful colors and patterns of these adorable canine companions.

If you have ever come across a Black Pitbull, you have certainly been impressed by their fierce and impressive appearance! Indeed, these dogs make a strong first impression due to their almost mystical physique. As the name suggests, these dogs have an all-black coat, sometimes with a white mark on the chest and toes. They are often in great demand because of their prestigious appearance.

Besides, brindle Pitbulls are relatively rare; finding them in dog shelters is quite an accomplishment. As a result, these dogs are generally more expensive than Pitbulls of other colors.

The Red Pitbull is not really red; its fur is just a tan-brown color. The Red Pitbull has nothing to do with the Red Nose Pitbull either since we are only talking about the color of its fur.

This coloring is not as uncommon as many breeders would have you believe – it is also found in boxers and greyhounds. The coat itself is short and stiff, so they don’t shed too much hair and therefore don’t need much grooming.

On the other hand, the dominant color in a brindle dog determines the name, followed by the term brindle. So, a red brindle Pitbull has red as its base color and then dark stripes that form the brindle pattern.

The Blue Pitbull is a type of Pitbull with a very dark blue color, ranging from silvery gray to dark charcoal. It is sometimes confused with the Black Pitbull because of their similarities in hair color.

Some may think that the color of the Pitbull differs from breed to breed and that the Blue Pitbull and the Red Pitbull are two separate breeds, for example. This is simply not the case. Indeed, the Black Pitbull, the Red Pitbull, and the Blue Pitbull are precisely the same dogs, and there is no physiological or behavioral distinction between these dogs, except for variations in color due to a recessive gene.

In addition, the Blue Pitbull is often considered one of the rarest Pitbulls; this is why they are often in great demand by potential buyers. However, so many dogs are available, especially for adoption, that this relative rarity is more or less erased.

Blue brindle pit bulls have a blue stripe pattern on a light-colored base coat. Some have white spots, especially on their stomachs.

Blue Fawn Pitbulls are absolutely gorgeous, with their light blue coat with a silver dominance and reddish or bluish noses. On the other hand, if you want to adopt one of these magnificent specimens, be prepared to have to take out your pennies: they are known to be expensive due to their relative rarity.

They are nonetheless a good investment as they make loyal, intelligent, and confident dogs perfect for families.

The Blue Fawn Brindle Pitbull is even more expensive than the previous color variation due to its beautiful combination of colors and patterns. This type of Pitbull has silvery-blue stripes mixed with fawn between each of them.

The fawn Pitbull has a coat color that varies from orange to yellow-ocher, through to mahogany red. Some Fawn Pitbull also present white markings on their belly.

Fawn Sable Pitbulls are rarer versions of Fawn Pitbulls. They have a coat color between yellow and tan, with black tips on the hairs.

Fawn brindle Pitbulls have a cream-colored coat with tawny stripes.

Tan Pitbulls have a coat color that varies between fawn and light brown. Some of these Pitbulls also have white markings on their bellies.

The Pitbull Seal has a coat that appears almost black at first glance. However, you will notice the chocolate or even silver hue of their beautiful fur in bright light. In addition, their tail and legs are often darker than the central part of their coat.

Tricolor Pitbulls have a combination of three coat colors: white, black, or tan. But they can have other color combinations, like blue, white, and tan, among others.

Good to Know: Is the Pitbull an Official Breed?

This simple question causes confusion! Does the Pitbull represent a unique breed, or is it a concept created from scratch?

In fact, we often speak, wrongly, about the Pitbull breed. Instead, the term defines four breeds of dogs from different lineages: the American Pit Bull Terrier, the American Bully, the American Staffordshire Terrier, and the Staffordshire Bull Terrier. According to historians, the former was used in dogfighting in the 19th century, while the other two were instead bred for dog shows. Only the last two are considered pure breeds by the major North American dog clubs. Besides, not all countries recognize the Pitbull as a breed.

Contrary to its reputation, the Pitbull is a caring, intelligent and obedient dog. The aggressiveness he can show, like other dogs, is related to the way he has been trained and not to his character. In fact, the Pitbull is very affectionate and loves to be cuddled. He also needs a lot of physical exercises hence his dynamic behavior and attraction to playing with children. The multiple colors and patterns of its coat are just one of the many attractions that pit bulls have. So no matter what coat color you choose, you will earn a staunch and loyal companion!

E-Collar vs. Shock Collar for Dogs: What’s the Difference?

How to Become a Search and Rescue Dog Handler

Can Dogs Eat Eggshells? What You Need To Know!