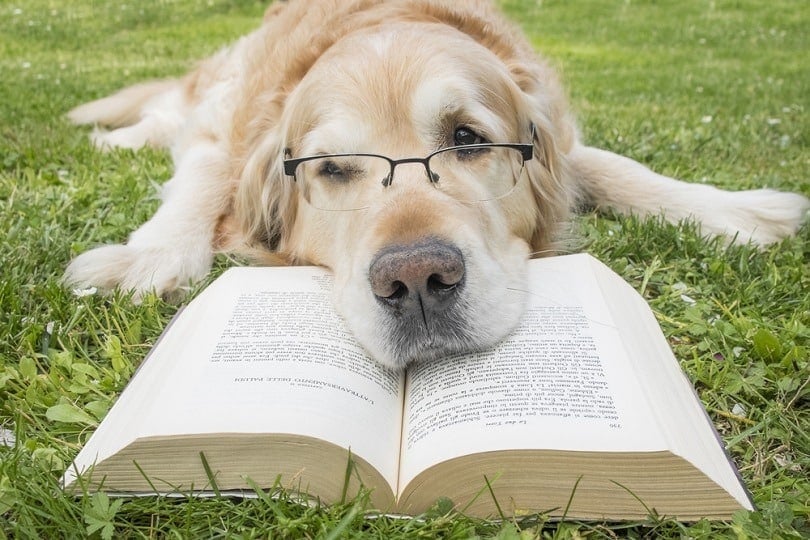 The fact that dogs are color blind is one of those bits of trivia that everyone knows, but did you ever stop to wonder if it was really true? As it turns out, it’s one of those “facts” that’s quite misleading.

It’s fair to say that dogs are indeed color blind, but only in the human sense of the world. It does not mean that they see the world in black and white. As it usually is, the truth is a bit more complicated than that, so let’s take a deeper look at how your pup actually views the world.

What Does It Mean to Be Color Blind?

It’s important to understand that any discussion of an animal’s sense of color will come from a place of bias, as we instinctively judge them against how we see the world.

Humans typically have three color receptors, or cones, inside their eyes. When a human is considered to be color blind, that typically means there’s a defect in one of their three cones, so they see the world with only two functioning cones.

Dogs, on the other hand, only have two color receptors in their eyes at all. That means that a normal dog’s vision would be analogous to a colorblind human’s eyesight. In that sense, then, dogs are definitely color blind.

That doesn’t mean that a dog’s vision is inferior to ours, though — that would be a biased way of looking at the situation. In lieu of a third color cone, dogs have rod-dominated retinas that let them see better in the dark, while also giving them superior motion-tracking abilities.

Also, dogs don’t rely strictly on color the same way that humans do. Instead, they use other cues, such as brightness and position, to give them information about a given situation. It’s worth noting that a dog will use visual cues to supplement their sense of smell rather than as a primary means of interacting with the world, whereas humans are much more visually-based creatures.

How Do Dogs See Color?

There are three types of color blindness in humans, with red-green being the most common (there’s also blue-yellow and complete color blindness). This means that affected individuals have difficulty telling the difference between red and green.

There are also varying degrees of each type of color blindness; some people have mild color blindness that makes the two colors look slightly similar, while people with more severe issues are completely unable to tell the difference between the shades.

Dogs, on the other hand, can only see yellow and blue, which oddly enough, makes them see the world in a similar way to how a red-green color-blind person sees it. While dogs can tell the difference between yellow and blue quite well, they struggle with red and green.

Red and green tend to get blended into brown or gray, giving the world a much more muted feel than what non-colorblind humans experience. They won’t see the same vivid contrast that such humans do, but they’ll still see many of the same colors.

Dogs’ vision differs from that of humans in more than just color perception. They’re also more likely to key in on movement, and they may struggle with depth perception and seeing at a distance.

Unlike humans, who have eyes set straight forward on their heads, dogs have their eyes set at a slight angle. This gives them better peripheral vision, but it also compromises their depth perception. It’s worth noting that a dog’s large nose can also interfere with their ability to see things right in front of their faces.

Most dog breeds don’t see at a distance as clearly as humans do either. While a human ideally has 20/20 vision, most dogs are more like 20/75 or worse (there are a few exceptions, like Labradors). This means a dog can only see something at 20 feet that a typical human can spot at 75.

However, that just means they can’t see detail at a distance — they’re still fantastic at spotting motion. While they couldn’t read an eye chart from 75 feet away (or at all — they’re dogs, after all), they would likely notice another animal running by at that distance.

What Does Colorblindness Mean for You and Your Dog?

Knowing how your dog sees the world is more than just a fun bit of trivia. It can also inform how you can play with and train them most effectively.

If you realize that they see yellow and blue better than red and green, for example, you can buy toys that are in that color pattern. Your dog will find it easier to retrieve a blue and yellow ball than a red and green one. If you’re trying to teach them to retrieve something, it makes sense to make things easier for them rather than more difficult.

This is especially useful if you find yourself getting frustrated with your dog. If they’re not retrieving the ball that you threw, it may not be due to stupidity or disobedience — they may just have difficulty seeing it. Switching to something in more canine-friendly colors can help.

Also, keep in mind that your dog does better with motion than with stationary objects, so while they may not see the ball lying in the grass, they will have a much better chance of spotting it if you kick it through the yard.

Knowing how your dog sees the world will give you a better appreciation for their behavior, and that includes understanding their ability to process color. Not only will this help you play with them better, but it will also improve your ability to train them.

This information may not be a complete game-changer, but it can help you process a few of the things that they do.

Related Read: How to Tell If a Dog is Blind

Can Dogs Drink Powerade? Is Powerade Safe for Dogs?

22 Whippet Mixed Breeds You Need to Know About!