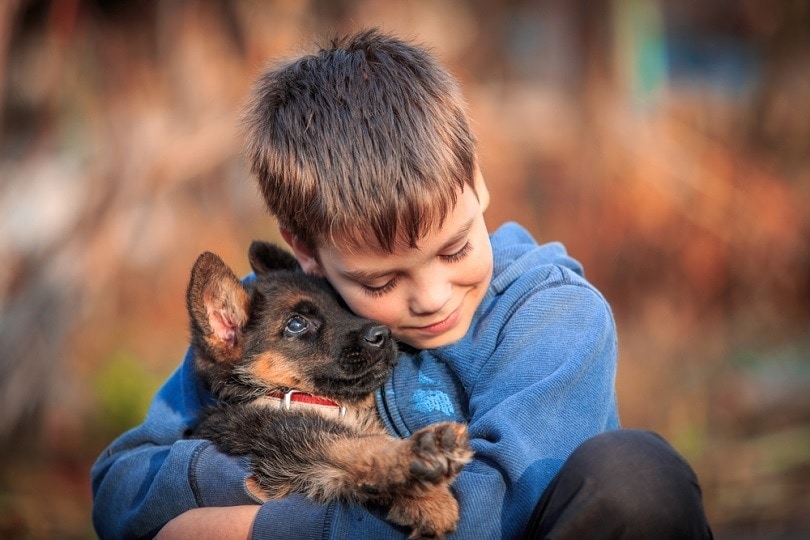 German Shepherds are large, proud dogs that make excellent pets and guard dogs. They can be intimidating at first, but most turn on the charm and quickly win over their human counterparts before long. They are adventurous, curious, intelligent, and trustworthy if they are treated and trained properly. But are German Shepherds good dogs to have around when kids are involved?

Socializing a German Shepherd is essential if they will be expected to get along with other people, including children. They may get along with their family members without socialization in the outside world. However, if they do not have an opportunity to spend time with others outside of the household often, they will likely not greet newcomers to their house or strangers on the street with an open mind.

Instead, they will likely be leery of anyone they meet that is not part of their immediate family, even harmless kids.  That leeriness can turn into aggression and end up in an attack and possibly serious injuries. Making sure that a German Shepherd gets out to meet new people and dogs multiple times a week will help ensure that they will be comfortable meeting new people as time goes on.

It will also get them used to all the different personalities and behaviors that people display. They will not be as startled when children come up to play with them, and they will be calmer when kids get rowdy around them.

There are many ways that a German Shepherd can be socialized, such as:

A German Shepherd should always be supervised when introduced to new settings and new people. As time goes on, the dog should be calm, cool, and comfortable whenever they spend time with children and adults alike.

Training is an essential step to take when raising a German Shepherd to get along well with children. Not only should the dog go through obedience training, but they will also benefit from relationship-based training, agility training, and dominance training to improve their relationships with kids and adults too. Training helps keep a dog engaged, satisfied, well-behaved, and ready to deal with a variety of different personalities, whether dealing with adults or children.

In addition to dog training, adults and children who live in the same household as a German Shepherd should consider going through training. Both children and adults can learn how to communicate with their large pet and understand how to maintain a pack-leader mentality when interacting with the dog. Training that includes both the dog and the humans is the best option for everyone involved, although it may be more costly.

If a German Shepherd does not have consistent interaction with children, they may become wary of them as time goes on and feel unsure of themselves when trying to interact with them. Any German Shepherd that is expected to get along with kids should spend plenty of time around kids — every day, if possible.

If they do not live with any kids, spending time at parks or inviting kids over regularly is essential. Even monthly visits with kids are not enough to ensure proper behavior when a German Shepherd meets with them. Try to get your German Shepherd around kids at least once a week to make sure that they are comfortable and cordial around them whenever they might meet.

Signs That Problems May Arise In German Shepherds

Nipping or barking at a child is an obvious sign that a German Shepherd is aggressive toward children that they are interacting with. However, there are other more subtle signs you should look for that may indicate that your German Shepherd is not safe for children to spend time around. But you must be on the lookout for these signs, or they may be easily missed, especially when many people are around or a great deal of commotion is going on.

Signs of problems include:

If you spot any of these signs in your German Shepherd, it is important to stop any contact that they might have with kids and to schedule a training session with a professional who understands the situation that you are in as soon as possible.

Signs That Things Are Going Well

Your dog should always be rewarded with love, attention, and/or treats whenever they show positive signs while interacting with children. This will encourage them to continue the behavior as time goes on and help keep safe any child who spends time with them.

German Shepherds are awesome dogs. They can be obedient, trustworthy, and great with kids. However, they require the right training and attention to do so. Nobody can expect a German Shepherd without training and socialization to behave well and show respect for humans of all ages. Hopefully, this guide has provided you with the information you need to make sure that your German Shepherd gets along well with kids and any other people whom they might come into contact with.