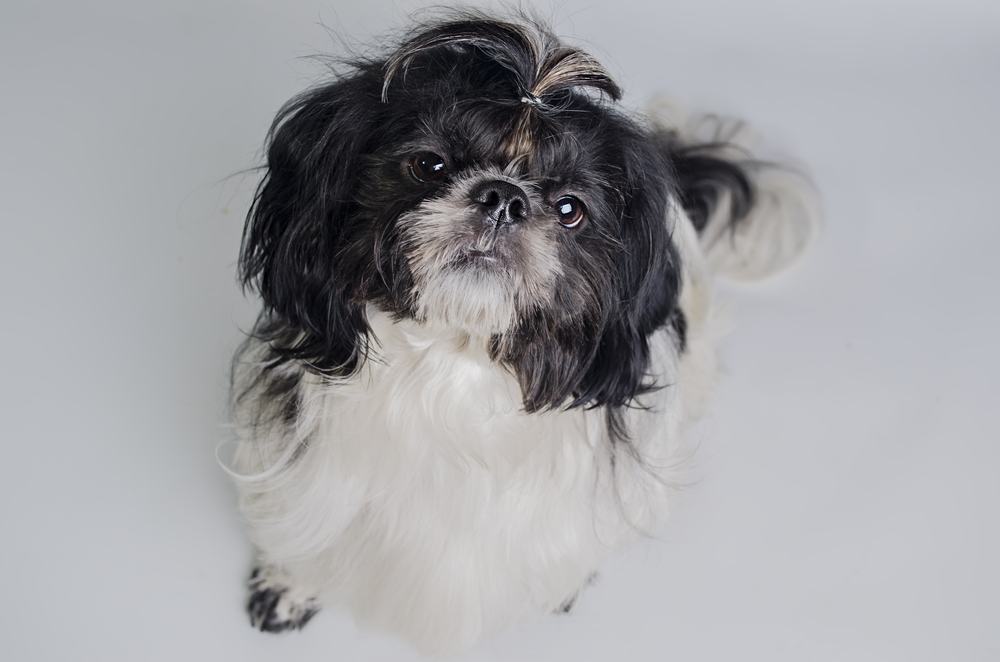 The Auss-Tzu is a hybrid cross between a Miniature Australian Shepherd and a Shih-Tzu. Since it is a cross between two smaller dogs, this pup ends up being quite small itself, with dense, silky fur and a healthy helping of attitude. They have a great deal of energy and require a fair amount of exercise each day to maintain a balanced lifestyle.

The Auss-Tzu is a modern hybrid, which means there is not much known about their traits and personalities. However, you can look at their parents to get a better idea of the kind of pup your Auss-Tzu puppy will be.

Auss-Tzu Puppies — Before You Get One…

3 Little-Known Facts About the Auss-Tzu

1.  Auss-Tzus are bred to bring out the best traits between the two breeds.

The Auss-Tzus may have first been bred to bring out the best personality traits and physical characteristics from the parent dogs. This choice breeding is especially true when regarding the Shih-Tzu parent.

Shih-Tzus are commonly brachycephalic, meaning they have a sort of “smushed in” face. Having this physical feature is not a good thing for dogs, leading them to have trouble breathing and more dental problems because all of their teeth cannot fit in their mouths.

Breeding Shih-Tzus with a dog with a longer muzzle, like the Australian Shepherd, generally leads to a longer muzzle in the puppies and dramatically reduces these problems.

Not only that, but the Shih-Tzu is considered a hypoallergenic dog. Breeding them with other dogs who are not hypoallergenic can increase the degree of this trait in the puppies.

Although most Auss-Tzus are not considered hypoallergenic because they do not have enough of the genes, they might give a slightly allergic owner better luck than with other crossbreeds of an Australian Shepherd.

2.  They can inherit an affinity for horses.

Australian Shepherds, as well as their miniature counterparts, are not actually of Australian origin. The dogs were developed in the western U.S. and were used as herding dogs for cattle and other livestock.

Today, they are considered one of the best dogs around horses, loving the time they spend with their long-legged friends. This amiability is probably from their history of running alongside horse riders to get out to the pastures and cattle, leading to a day of work.

3.  Even though the hybrid is a modern breed, there is a long history in its lineage.

The fact above touched on some of the history of the Australian Shepherd. However, this parent is not the only one with an engaging backstory.

The Shih-Tzus origins have never been completely verified. What we do know is that they are one of the oldest breeds that still exist in similar form today. They served as guard dogs and companions to monks in the monasteries built in the mountains of Tibet.

In these mountains, they became prized possessions because of their discerning nature and intelligence. Eventually, they were given to the Chinese emperor as a gift. They became a fixture in the palaces up to the modern age.

Temperament & Intelligence of the Auss-Tzu 🧠

Since this dog breed is a relatively modern mix, there are not many traits that can be firmly attributed to their personality. They are an amiable and energetic dog, inheriting these genes from both of the parental lines.

Looking at the parents can be one of the best ways to figure out the tendencies that a hybrid puppy will have. Both the Shih-Tzu and the Miniature Australian Shepherd are playful, outgoing dogs. They are ordinarily good-natured and enjoy getting out and about.

Their energy and activity needs mean they usually are better suited to homes with fences around the yard so they can run around in it, although the pups may do well in an apartment if they get out to exercise frequently.

Due to the herding nature of the Mini Aussie, the pups may try to herd things smaller than them. They do this by moving around them quickly and sometimes nipping at their heels to move in the direction they want. It is not an aggressive behavior but neither is it preferable, and it can be trained out of them.

Both of the parents of the Auss-Tzu are intelligent dogs, as can be seen with their history. They also have a stubborn streak. The combination normally means that they aren’t considered a perfect fit for first-time dog owners.

The Auss-Tzu can make a perfect pet for a family, especially an active one. These dogs need a great deal of stimulation, both mentally and physically. They should not be left alone with very young kids because of their highly energetic nature.

Since they are small and don’t have aggressive tendencies, they are unlikely to do any harm. However, it is best for both the child and the pup to have supervision to guarantee a long-lasting friendship.

With early socialization, Auss-Tzus can do well with other animals since they are so friendly. They are also quite loyal dogs and may inherit possessive traits from the Shih-Tzu. This trait is another reason that early socialization is critical.

Things to Know When Owning an Auss-Tzu

Although they are small, their energy output during the day means they need a consistent diet of nutrient-rich food. Pick one formulated for the pup’s age, as well as its specific size, and how much activity you give it each day.

Mini Aussie Shih Tzu mix is susceptible to experiencing joint issues. Thus, keeping them at a healthy weight is crucial to prolong a healthy life. Don’t allow them to free-feed; monitor their eating habits carefully. Choose a high-protein diet that is low in fillers shown to cause weight gain.

As mentioned, the Mini Aussie and Shih Tzu mix needs a good deal of daily exercise compared to other, similarly-sized dogs. They require at least 60 minutes of consistent activity every day, preferable high-energy activities. These can include long walks, shorter runs, or hikes.

Also, consider taking your dog out for game time, mentally engaging them by teaching them how to play frisbee, toss-up, or fetch. Taking these pups to a dog park accomplishes the activity requirements for the day, as well as getting them socialized and accustomed to other animals and people.

The Auss-Tzu needs an owner who is firm but compassionate. They need consistency in their training and frequent training sessions to reduce less desirable traits in their personality as early as possible.

Training early on like this helps guarantee that they become the best family dog they can be and well-behaved around other dogs and people.

The pup isn’t considered a good match for first-time dog owners due to a potential stubborn streak coming from both of the parents. They do not respond well to negative or harsh feedback, only becoming more stubborn and balking at commands.

When training, practice the commands consistently and with multiple different people, cementing them until the dog follows the command every time.

The Auss-Tzu mix typically needs more maintenance than standard Australian Shepherds, but less than a normal Shih-Tzu. The grooming also comes down to the specific genes they inherit for their fur. They need to be combed and brushed daily to keep mats out of their silky coats.

Be sure to pay attention to their dental hygiene because they are at risk of inheriting dental problems from their Shih-Tzu parentage. If they have a shorter muzzle, this is especially the case.

Any hybrid dog breed is susceptible to the common diseases that afflict the parents. Check with a breeder to see the parent’s health history to get a better idea of the risk for your pup. Hybrids, although susceptible to both sides, generally tend to be healthier than purebred parents because they have a larger gene pool.

Auss-Tzus may inherit beautiful blue eyes from the Mini Australian Shepherd. Although this appears to be a gorgeous trait, it also has the potential to lead to eye disease. Have your vet continue to check their eyes at each vet exam.

Since there are not many traits that can be specifically attributed to your pup, there are no noticeable differences between male and female Auss-Tzus.

An Auss-Tzu is a hybrid breed meant to bring harmony to two distinctive types of dogs. With this mix, you get an ancient elegance mixed with a cowboy’s best friend. They are friendly, beautiful pups who make great additions to any active lifestyle.

With the right socialization and training early on, these dogs are the perfect size to make a constant companion everywhere you go, dazzling people with their looks and charm.