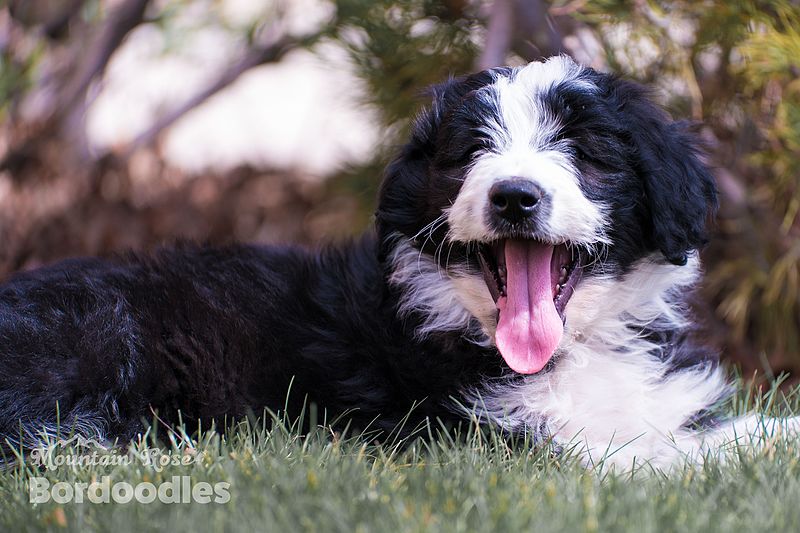 As a mix of the Border Collie and Poodle, Bordoodles are cute, cuddly, and affectionate. This hybrid breed is an excellent companion for children, adults, and seniors alike. They don’t require a lot of exercise, so they fit in well with busy households. Though inquisitive, Bordoodles aren’t known for being destructive like more active breeds can be.

The Border Collie side of this mixed breed has an instinct for herding, but the Poodle side helps balance this drive with intelligence and a joyful nature. The Bordoodle sports a long, wavy coat that looks and feels luxurious. This breed comes in a variety of vibrant colors, some with white markings and others with tri-colored designs. And, thanks to the Poodle’s lineage, the average Bordoodle doesn’t shed much.

Also sometimes called Borderpoos, Borpoos, and Borpoodle, the Bordoodle is very protective of their family members which makes them a good lookout at night when everyone is blissfully sleeping. But beware that Bordoodles are extremely intelligent so they can become stubborn and hard to handle without proper training and thorough socialization. Read on to learn more about this fascinating mixed breed.

Bordoodle Puppies – Before You Buy…

Like any dog, Bordoodles require time, energy, and attention from their owners. Potential owners should be prepared to spend time training, playing, and walking on a regular basis. Fun, adventure and lots of snuggles should also be expected.

What’s the Price of Bordoodle Puppies?

The price of a new Bordoodle puppy can vary. Plan on spending anywhere from $700 to about $1,600 for one pup. The pedigree of the pup’s parents will have a big impact on the price of the dog. If a Bordoodle’s parents are registered with the AKC and have won awards, the pup would likely be sold for top dollar.

If the pup’s parents are not registered and the quality of their lineage can’t be verified, the price could be on the lower end. We recommend reading the parents’ documentation before buying a Bordoodle pup to verify their lineage and their value. Keep in mind that Bordoodles can be found in shelters too. While shelter dogs don’t come with a verifiable lineage, they do offer all the love and joy a family could want – and at an affordable price.

Both the Border Collie and the Poodle are featured on the American Kennel Club’s most intelligent dogs list. So, it’s no surprise that the Bordoodle is considered a super-smart hybrid breed. Bordoodles learn quickly and can even teach themselves how to do things (sometimes not so great things) if they aren’t getting enough training and stimulation at home.

Oftentimes, grooming a dog is thought of more as a chore than anything else. But their luxurious coat makes it fun to groom the Bordoodle. The long coat is easy to style in several ways, so your Bordoodle could sport a short coat during the summer and a fancier long style when the winter months arrive.

3. They Inherit the Best of Both Worlds

The Bordoodle tends to inherit the best traits of their parents, while the lesser desirable traits are muted. The result is a well-behaved dog that’s easily trainable and always loyal.

Temperament & Intelligence of the Bordoodle

The Bordoodle doesn’t have to be taught how to do something twice. This dog thrives in a training environment and tends to excel at the art of obedience. Bordoodles have a long attention span, a solid work ethic, and a bubbly personality. This breed loves praise and will do just about anything to get it. They are motivated by food, which makes treats an excellent tool to use during training time.

Bordoodles are very sociable and can get along with anyone who is gentle with them. They’ll happily play with children in the backyard and gleefully snuggle with grandma on the couch. Because the Bordoodle is protective of their family, socialization as a puppy is a must to ensure positive interactions with houseguests.

No family could ask for a better dog than the Bordoodle. They’re gentle and kind yet have a carefree attitude that kids can appreciate. These dogs can be trained as service dogs and they don’t need a ton of exercise, which makes them a great option for the elderly. They can also keep up with the active lifestyle of singles and couples or slow down for those busy humans who don’t like to do much but relax during their downtime.

Bordoodles get along well with other dogs and can co-exist with cats in the same household. They enjoy trips to the dog park where they can meet new friends on a regular basis. And they aren’t territorial so sharing mealtime space with other dogs shouldn’t be a problem.

Things to Know When Owning a Bordoodle:

Owning a Bordoodle isn’t all fun, games, and cuddles. There are a lot of considerations to make before taking the plunge and adopting a pup of your own. Here’s what you need to know.

How much your Bordoodle should eat will depend on how much exercise they get throughout the day. The amount could be anywhere from one to three cups. With medium energy personalities, this breed can do well lounging around in an apartment or taking daily hikes in the woods. The more active your dog is, the more food they will require to fuel their energy needs.

A high-quality food that contains no fillers like fructose, corn, or soy should be offered for optimal health and longevity. Additional foods such as beef, eggs, and shredded carrots can be offered occasionally as a treat for additional nutrition. Bordoodles should drink about an ounce of water for every pound that they weigh. Offering a never-ending supply of fresh clean water will help ensure that they get all they need.

Bordoodles can do well with just a few walks a week. A day can be skipped here and there if the schedule is too packed, but more than a missed day could lead to boredom. This isn’t to say that a Bordoodle can’t live an extremely active lifestyle that includes regular hikes, camping trips, and swims in the ocean.

Due to this breed’s smarts, their brains need to be exercised just as much as their bodies. So, in addition to a minimum of several walks each week your Bordoodle should be exercised indoors with the help of training toys and obedience games. Some playtime in the yard or park with other dogs is also a good idea to help burn some energy and keep this breed socialized.

Training is essential to help direct this breed’s attention and energy toward positive behavior. Luckily, their intelligence makes it a breeze to teach them obedience. In fact, even children can have success in teaching a Bordoodle how to sit and stay. Bordoodles do so well with obedience training that they tend to be regular participants in obedience competitions.

Agility training is doable. But unlike their Border Collie parents, the laid-back personality of the Bordoodle may inhibit a serious interest in the sport. Focusing on the basic obedience commands will produce a well-rounded pooch that it is to work and live with.

Due to the sheer length of a Bordoodle’s coat, grooming is an essential task that will have to be faced on a regular basis. In addition to weekly brushing, occasional nail clipping and teeth brushing, and weekly ear cleaning, most Bordoodles need a haircut now and then to keep their coats from matting and knotting up. Without a good haircut, this breed can quickly start to look homeless.

Owners should be prepared to take their pooch to the groomers every couple of months unless they want to learn how to do the job themselves. The good news is that haircuts tend to be a fun task because different styles can be created each time.

The Bordoodle isn’t prone to any breed-specific health problems, but general issues could arise depending on many things such as age, general health, diet, and exercise.

Male Bordoodles are usually a little larger and heavier than female Bordoodles. This smaller frame of the females makes them a bit more agile than males. When it comes to attention and affection, male Bordoodles seem to be more dominant. They enjoy the praise and snuggling more than the independent female typically does. Bordoodle Girls tend to be more reserved than Bordoodle boys as they age, whereas the males enjoy maintaining their younger carefree attitudes. And the girls are sometimes, but not always, more strong-willed and stubborn overall.

The Bordoodle is an excellent companion for brand new dog parents and lifelong owners alike. They can easily settle into apartment living, but they won’t complain about a big house and a nice fenced yard to play in. This breed is generally healthy and well-behaved, two qualities that important for households with young children. And we know you’ll love their soft and fluffy coat. If your family is ready to adopt a new puppy, the Bordoodle is certainly worth considering. 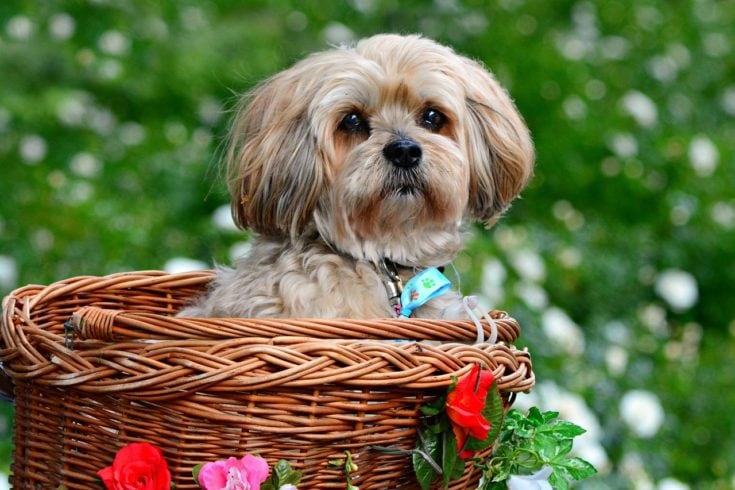 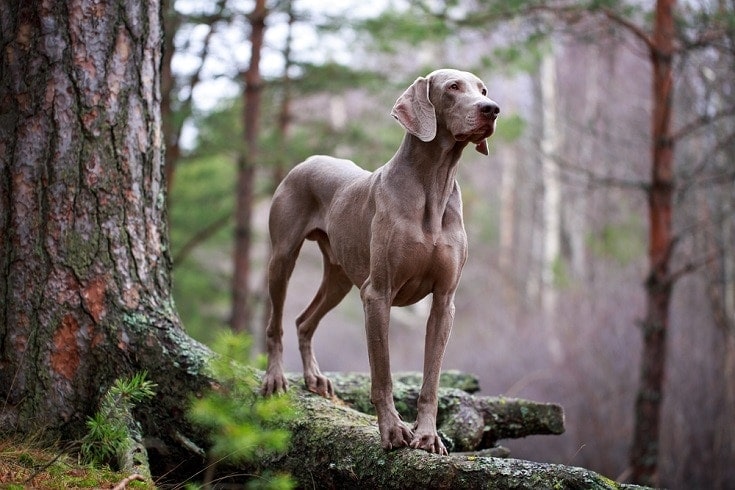 How Much Does a Weimaraner Cost? (2021 Price Guide) 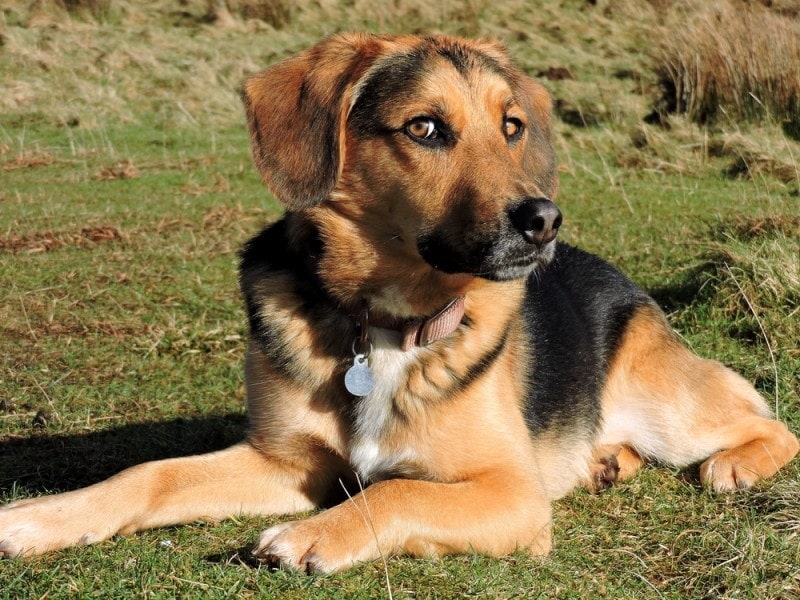 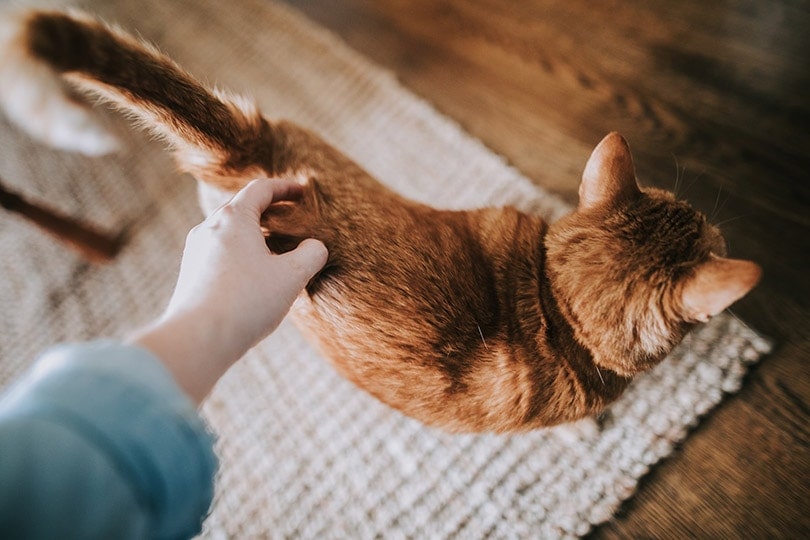