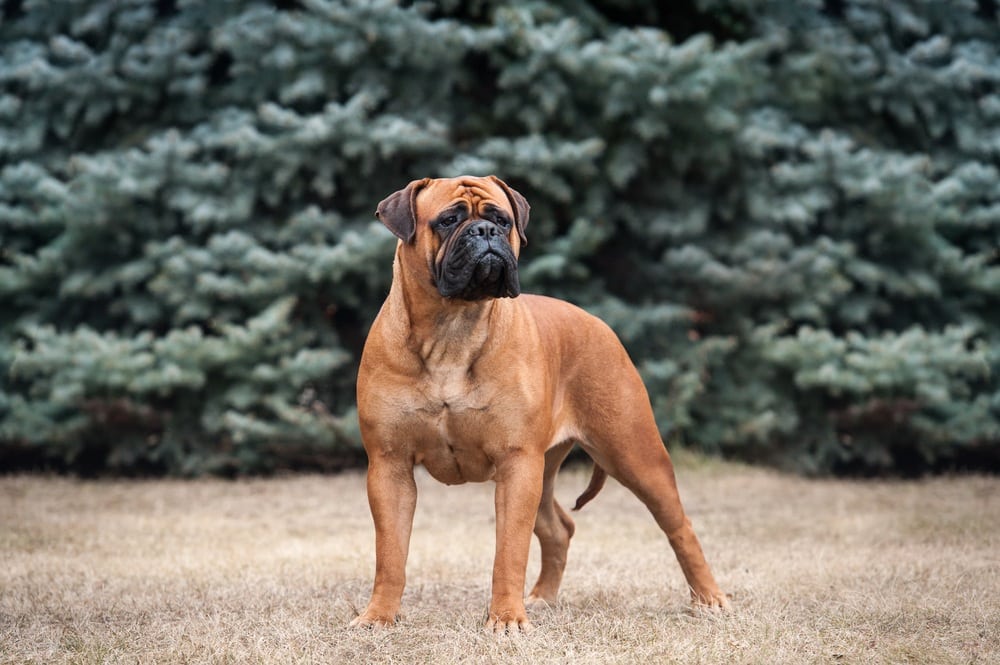 Mastiffs are known to be large dogs. The Bull Mastiff, originally a cross between the Bulldog and the Mastiff, isn’t as large as a full-bred Mastiff. But the mix is quicker than a Mastiff, larger than a Bulldog, and completely fearless in the face of danger.

Though originally a mixed-breed, the Bull Mastiff received AKC recognition as a pure breed in 1933. In its final form, it appears to be about 40% Bulldog, with the Mastiff genes taking the majority 60%.

Calm and intimidating, the Bull Mastiff is hard to get excited. They don’t get riled easily, remaining calm in almost all situations. This is part of what makes them such excellent guard dogs. They also tend to be silent, so don’t expect your Bull Mastiff to alert you by barking.

The Bull Mastiff is very suspicious of strangers and will need constant socialization from an early age. They also tend to be aggressive towards other pets, so they’re not a great bet for families with pets. But if it’s raised with kids from puppyhood, then your Bull Mastiff should do very well with children.

Bull Mastiff Puppies – Before You Get One

1. They were bred to ward off poachers.

The Bull Mastiff has an interesting history. In the 1800s, English nobles owned massive swaths of private land, covered in big game animals that attracted many poachers. Even though the penalty for poaching was often death, it wasn’t enough to stop the multitudes of people willing to risk it.

A new solution was needed. Gamekeepers were in danger since poachers would often shoot rather than face the death penalty. So, they started using dogs. But Mastiffs were too slow to run down the poachers and bulldogs were too small, so the desperate gamekeepers mixed the two.

The resulting Bull Mastiff was everything they needed. It was very fast and nimble, but it was still a huge dog that was as dangerous as it was intimidating. Moreover, they were nearly silent, able to wait in ambush when necessary. This history led to the Bull Mastiff getting the nickname of “the gamekeeper’s night dog.”

In most cases, large breeds don’t do very well in apartments. But the Bull Mastiff is an exception to the rule. They aren’t very high energy and don’t need a large yard to let off steam in like many other large breeds do.

Likewise, Bull Mastiffs don’t need as much energy as other similarly-sized dogs. Just 20-30 minutes on a walk, playtime, or other physical activity should be plenty for your Bull Mastiff.

Aside from this, you can expect to see your Bull Mastiff lounging quite often! They’re pretty low-key, calm dogs. They can still be playful, and their antics are often hilarious, but they’re never hyper or high-energy.

If you live in a hot climate, then a Bull Mastiff isn’t the right choice for you. These dogs don’t do well in hot climates since they’re highly susceptible to heatstroke and heat exhaustion.

But it’s not just Bull Mastiffs that are at risk. All massive dog breeds of a similar size are at higher risk than smaller dogs. Worse, brachycephalic dog breeds, breeds with short and smushed snouts such as the Bull Mastiff, are already not good at regulating heat because of their breathing impediments.

Overall, heat and Bull Mastiffs don’t mix. You should only consider getting one of these gentle giants if you live in a temperate, cool climate.

Temperament & Intelligence of the Bull Mastiff 🧠

Smart, independent, and utterly loyal, the Bull Mastiff is a great family dog or guard dog. They don’t bark unless threatened and their exercise needs are minimal, so they’re even suitable for apartments, despite their massive size.

But training a Bull Mastiff isn’t easy, even though they are very smart animals. They are just as independent as they are intelligent, so it can be difficult to make them want to commit to training. Worse, they’re known for being somewhat stubborn, which certainly isn’t going to help this situation.

Still, it’s hard to find a more loyal and dedicated companion than the Bull Mastiff. And their large size combined with their silent protector nature makes them the ultimate watchdog or guard dog as well.

On top of being equally well-suited for living in a house with a yard or an apartment, the Bull Mastiff is also known for being great with kids. They’re extremely gentle with kids, especially if they grew up around children.

Of course, just by virtue of their size, Bull Mastiffs can be a danger to little ones. They’re very careful not to hurt the children on accident, but a single tail flick from a dog this size can easily knock a toddler to the floor!

Things to Know When Owning a Bull Mastiff

Remember, Bull Mastiffs are big dogs. They are going to eat quite a bit. Be prepared to feed three or more cups of high-quality dry dog food to your Bull Mastiff each day. That can add up to quite an expense month after month, so be aware of it before you add a new puppy to your family.

Since Bull Mastiffs are such sizable dogs, it might be a good idea to add some joint supplements to their dietary intake. Glucosamine and chondroitin can help a dog to keep healthy joints and function as they age, which is particularly important in large dogs who tend to have joint problems pretty commonly.

Most big dog breeds require quite a bit of exercise, but the Bull Mastiff is a bit of an anomaly. They need very little physical activity. So little that they actually make great apartment pets even though they’re huge!

If you take your Bull Mastiff on one decent walk each day, it should remain healthy. That’s all it takes to meet their exercise needs. In fact, you need to be careful not to overdo it.

This breed won’t appreciate jogging, and the impact of their heavy bodies on their joints won’t be good long term. These are walking dogs rather than jogging dogs, so runners need to look elsewhere!

Bull Mastiffs are very smart and they also want to please their owners. It stands to reason that they’d be somewhat easy to train. Unfortunately, that’s not the case.

If you’re looking for a first dog or you don’t have much experience training dogs, then the Bull Mastiff isn’t a great choice for learning. They’re big, strong, and stubborn. Their independent streak and stubbornness can make them quite difficult to train. A firm and experienced hand is needed.

With short coats that shed only minimally, the Bull Mastiff is a very low-maintenance breed. They only need regular brushing to remove loose hair. Make sure to check on their ears and clean if necessary, as well as trim the nails. Daily brushing is also recommended.

Unfortunately, the Bull Mastiff is susceptible to a myriad of health conditions. Some are serious, some are minor and manageable. But if you have one of these dogs, there are quite a few problems you’ll want to look out for.

Similar to many other breeds, the male Bull Mastiffs are larger than the females. Females tend to top out at about 120 pounds and 25 inches tall. But the males can be an extra ten pounds heavier at 130 pounds and can reach heights of 27 inches.

Temperamentally, males also tend to be a bit more aggressive. This is especially true when they’re around other male dogs when they tend to exhibit the most aggression and dominant behavior.

If you’re looking for a silent watchdog or the perfect big-breed apartment companion, then look no further than the Bull Mastiff. This breed is tough and intimidating but gentle and loving. They’re low-energy dogs that would rather lounge all day and only need minimal exercise. Few big dogs work as well in apartments as Bull Mastiffs.

Plus, these dogs rarely bark. They’re silent companions that are more independent than most breeds. They like your attention, but they don’t need it. If you need to leave your dog at home alone pretty often, this breed won’t mind.

They even do well with children, showing great care not to hurt them. But don’t expect your Bull Mastiff to get along with other pets. They tend to get aggressive, particularly with other dogs.