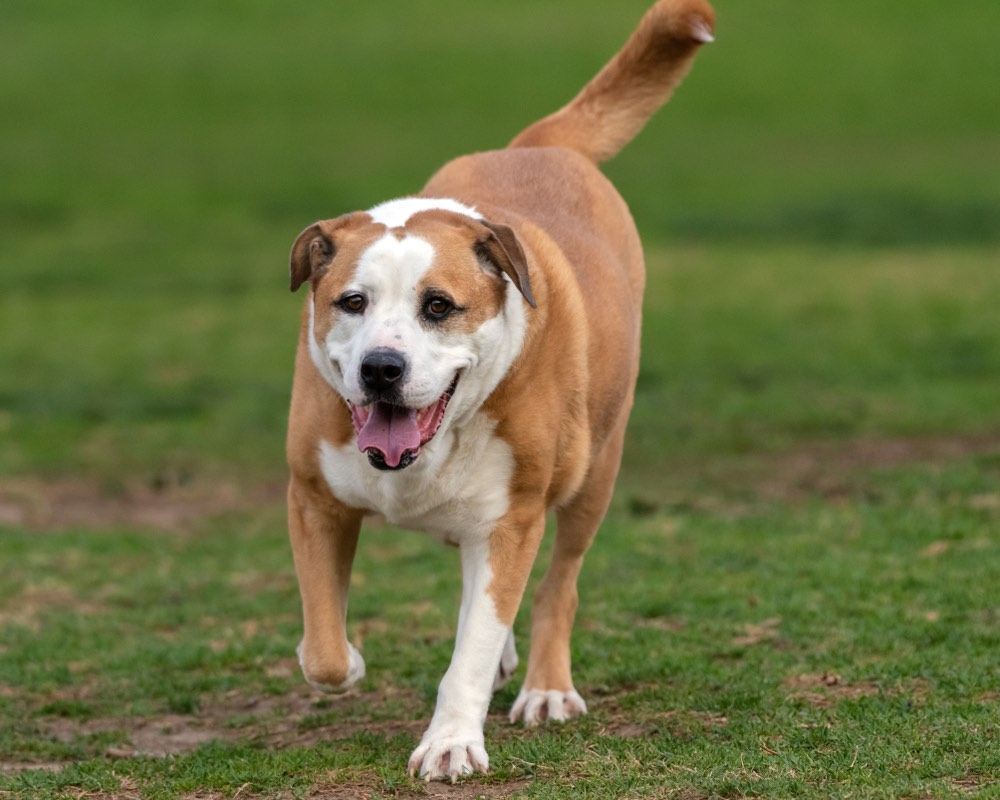 The Bully Basset will catch your eye because of his unique physique. He will capture your heart with his loving nature and devotion. This medium-sized dog brings the calm demeanor of the Bulldog combined with the muscle and brawn of the Basset Hound. While not the most active pooch, he has the stamina and endurance for a day of play, even if he needs some coaxing.

This pup is relatively new on the scene. The American Canine Hybrid Club recognizes the mix, along with the Designer Dogs Kennel Club. Although he sheds, the Bully Basset is easy to groom. There are some health concerns inherent with the parent breeds. Otherwise, owners will appreciate the pup’s outgoing nature, even if he is a bit willful at times.

Bully Basset Puppies – Before You Buy…

The Bully Basset is a unique looking dog, for sure. He’s relatively adaptable, even for apartment living. Owners should commit to daily exercise to keep him fit. The Basset Hound in him brings some undesirable habits like barking and digging to the mix that you must curb early. He also has a tendency to drool.

These are all minor points when you consider how outwardly friendly this pooch is. He loves people, a trait the Bully Basset gets from both of his parent breeds. He is also a calmer dog without the overt intensity that marks some dogs. He is a devoted companion that makes an excellent family pet with all of his quirks.

The Bully Basset gets a dose of stubbornness from both of his parent breeds. It’s not unusual given their histories. The Bulldog has that name for a reason—his unfortunate past in bullbaiting. The Basset Hound was an independent hunter that pursued game by scent. That accounts for some of his bad canine manners.

The cost of Bully Basset puppies is a bit trickier to home in on because of the different prices of the parent breeds. The Bulldog is the fifth most popular dog, according to the American Kennel Club (AKC). That fact makes the $2,000-plus price tag for a pup a common thing. The Basset Hound ranks at 39th on the list.

Based on these two breeds, you probably can expect to pay north of $1,000 and probably closer to $2,000. Because of their propensity for some genetic conditions, we strongly urge you to buy only from breeders who have conducted the recommended health screenings for each one. Bear in mind that these tests will likely affect the price you pay. We think it’s worth the peace of mind.

1. The Basset Hound and Bloodhound share a common ancestor.

The Basset and Bloodhound exceed as scent hunters. They have a sense of smell that takes them places. It turns out there is a good reason that they excel in this sport. Many speculate that the two breeds are descendants of the legendary canine of the hunt, the St. Hubert hounds of France.

2. The Bulldog Club of England is the oldest of its type in the world.

Part of the AKC recognition process is the formation of a breed club. The Bulldog has the oldest one ever formed, The Bulldog Club. The membership established it in 1878. It has set the standard for these organizations ever since.

3. The Bulldog has a presidential past.

Not many breeds can boast the pedigree of past owners like the Bulldog. Among his following were three presidents, President Warren G. Harding, Franklin D. Roosevelt, and President Calvin Coolidge.

Temperament & Intelligence of the Bully Basset

The stubborn streak of the Basset Hound makes the Bully Basset not the best choice for the first-time pet owner. He is reasonably intelligent and has a laid-back manner that many will find appealing. Don’t let that fool you. He is a dog that can go for the long haul, whether on a walk or romp at the doggie park. Early socialization is a must to preserve his friendly qualities.

The Bully Basset loves people, even strangers. That won’t make him the best watchdog. However, both parent breeds are kid-friendly. They’ll do well with everyone in the family. They are good-natured and patient, although they may get vocal when the excitement level rises if the children want to roughhouse with him.

The Bully Basset has the friendly nature of the Basset Hound, combined with the Bulldog’s tendency to save his affections for people instead of other animals. The other thing to bear in mind is the strong prey drive of the Basset. This scent hound hunted rabbits and other small game, historically. Therefore, a running cat is sure to catch the Bully Basset’s attention, even if he’s not as fast.

Things to Know When Owning a Bully Basset

Benjamin Franklin once said, “If you fail to plan, you are planning to fail.” You can say the same about pet ownership. Researching the parent breeds is a must-do to ensure the beginning of a beautiful friendship. As with most pups, there are good and bad points. There are also things to watch for from a health perspective and with training. Let’s go over what you need to know upfront.

Both parent breeds of the Bully Basset are food-motivated and have a tendency to gain weight. It is essential to feed him a diet formulated for medium-sized dogs. The caloric content is more in line with the metabolism of this pouch. We also suggest elevated food bowls, especially if he has the low-hanging ears of the Basset to keep them out of his water.

Monitor your pet’s weight carefully. He doesn’t have to get the amount of food recommended on the package. Base the Bully Basset’s intake on his appearance and activity level. Adjust the amount accordingly.

The Bully Basset takes after his parent breeds with their low-key demeanor and docile nature. He’ll do well with daily walks that will also help keep his weight under control, too. We recommend keeping your pup on a lead at all times because of his high wanderlust potential. You can thank the Basset Hound in him for that trait.

While intelligent, the Bully Basset gets a dose of independence from the Basset Hound in him. He is sometimes stubborn. He is relatively sensitive, making positive reinforcement the best plan of action with this pup. Treats are an excellent training aid and motivator if he needs a reason to stick with the program.

We’d suggest confining treats to these sessions. It can help hone the Bully Basset’s focus on learning new commands. It’ll also help ensure that he stays trim. Just make sure that the kids know that, too.

Both parent breeds shed, so weekly sessions with a curry brush are essential if just to keep the hair under control. Think of it as bonding time. The Basset Hound in him will need his ears checked and cleaned regularly. If your Bully Basset has the facial wrinkles of a Bulldog, they will also require attention to avoid skin issues.

The primary concerns with the parent breeds and, thus, the Bully Basset, involve the eyes and joints. The Orthopedic Foundation for Animals recommends several screenings for both.

The size difference between male and female Bully Bassets is as dramatic as it is with some breeds. The choice between the sexes comes down to preference and breeding. If you choose to forgo the latter, we recommend neutering or spaying your pup as advised by your veterinarian. You are sure to get a delightful pet with either one.

For the right individual or family, the Bully Basset is a joy to have as part of your household. He is a loyal companion for adults and children alike. For your attention, he’ll reward you with his undying love and charming personality that begs to get him noticed. With all his excellent qualities, the Bully Basset is sure to garner looks and comments. Who could blame anyone with that adorable face?